Over the span of my academic career I have taught a course simply titled "Paul," and I half-jokingly tell the students the first day that Paul is one of those people for whom a last name is not necessary, much like Elvis or Madonna. I have begun the course with what I intend to be a startling assertion: Paul is the most influential person in human history. I have in mind, of course, the West in particular. The foundations of Western civilization, from our assumptions about reality to our societal and personal ethics, rest upon the heavenly visions and apparitions of a single man -- the apostle Paul. We are all cultural heirs of Paul. In contrast, Jesus as a historical figure -- that is, a Jewish Messiah of his own time who sought to see the kingdom of God established on earth -- has been largely lost to our culture. In this holiday season, it is worth taking pause and thinking a bit about the historical origins of the Christian faith, and how much it depends on St. Paul.

Visit any church service, Roman Catholic, Protestant or Greek Orthodox, and it is the apostle Paul and his ideas that are central -- in the hymns, the creeds, the sermons, the invocation and benediction, and of course, the rituals of baptism and the Holy Communion or Mass. Whether birth, baptism, confirmation, marriage or death, it is predominantly Paul who is evoked to express meaning and significance.

The fundamental doctrinal tenets of Christianity, namely that Christ is God "born in the flesh," that his sacrificial death atones for the sins of humankind, and that his resurrection from the dead guarantees eternal life to all who believe, can be traced back to Paul -- not to Jesus. Indeed, the spiritual union with Christ through baptism, as well as the "communion" with his body and blood through the sacred meal of bread and wine, also trace back to Paul. This is the Christianity most familiar to us, with the creeds and confessions that separated it from Judaism and put it on the road to becoming a new religion.

Paul never met Jesus. The chronological facts are undisputed. Jesus of Nazareth was crucified during the reign of Pontius Pilate, the Roman governor or prefect of Judea, in April, A.D. 30. As best we can determine it was not until seven years after Jesus' death, around A.D. 37, that Paul reports his initial apparition of "Christ," whom he identifies with Jesus raised from the dead. He asks his followers when challenged for his credentials: "Have I not seen Jesus our Lord?" equating his visionary experience with that of those who had known Jesus face-to-face (1 Corinthians 9:1). Paul's claim to have "seen" Jesus, as well as the teachings he says he received directly from Jesus, came after Jesus' lifetime, and can be categorized as subjective clairvoyant experiences (Galatians 1:12, 18; 2:1; 2 Corinthians 12:1-10). These "revelations" were not a one-time experience of "conversion," but a phenomenon that continued over the course of Paul's life. Paul confesses that he does not comprehend the nature of these ecstatic spiritual experiences, whether they were "in the body, or out of the body" but he believed that the voice he heard, the figure he saw and the messages he received were encounters with the heavenly Christ (2 Corinthians 12:2-3).

It was a full decade after Jesus' death that Paul first met Peter in Jerusalem (whom he calls Cephas, his Aramaic name), and had a brief audience with James, the brother of Jesus, and leader of the Jesus movement (Galatians 1:18-23). Paul subsequently operated independently of the original apostles, preaching and teaching what he calls his "Gospel," in Asia Minor for another 10 years before making a return trip to Jerusalem around A.D. 50. It was only then, 20 years after Jesus' death, that he encountered James and Peter again in Jerusalem and met for the first time the rest of the original apostles of Jesus (Galatians 2:1). This rather extraordinary chronological gap is a surprise to many. It is one of the key factors in understanding Paul and his message.

I have spent my 30-year career as a scholar of Christian Origins investigating the silence between two back-to-back statements of the Apostles' Creed, namely that Jesus was: "Conceived by the Holy Ghost, Born of the Virgin Mary," and that he "Was crucified, dead and buried, and on the third day He rose again from the dead."

Is it not striking that this oldest and most foundational Christian creed jumps from Jesus' birth to his death and resurrection, entirely skipping over his life?

How did it happen that the way Jesus came into the world, and how he left -- Christmas and Easter -- came to define Christianity itself? Here Catholics, mainstream Protestants and evangelicals all agree. To be a Christian is to believe in the virgin birth and resurrection of Christ, and thus to participate in the salvation Christ brought to the world as God-in-the-flesh.

In contrast, the original Christianity before Paul is somewhat difficult to find in the New Testament, since Paul's 13 letters predominate and Paul heavily influences even our four Gospels. Fortunately, in the letter of James, attributed to the brother of Jesus, as well as in a collection of the sayings of Jesus now embedded in the Gospel of Luke (the source scholars call Q), we can still get a glimpse of the original teachings of Jesus.

What we get in the letter of James is the most direct possible link to the Jewish teachings of Jesus himself. James is quite sure that the "Judge" is standing at the door, and that the kingdom of God has drawn very near (James 5:7). He warns the rich and those who oppress the weak that very soon the judgment of God will strike. James seems to be directly echoing and affirming what he had learned and passed on from his brother Jesus. It is important to note that James did not directly quote Jesus or attribute any of these teachings to Jesus by name -- even though they are teaching of Jesus.

For James the Christian message is not the person of Jesus but the message that Jesus proclaimed. James' letter lacks a single teaching that is characteristic of the apostle Paul and it draws nothing at all from the Gospel narratives. What we have preserved in this precious document is a reflection of the original apocalyptic proclamation of Jesus: the "Gospel of the kingdom of God" with its political and social implications.

PHOTO GALLERY
In the Footsteps of Jesus
Download
Calling all HuffPost superfans!
Sign up for membership to become a founding member and help shape HuffPost's next chapter
Join HuffPost

Christianity Before Paul
In the Footsteps of Jesus 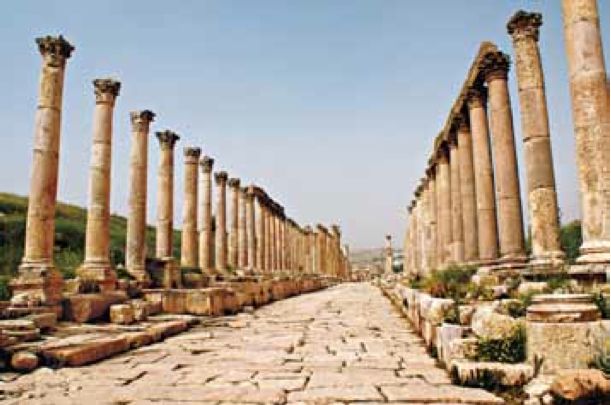 1 / 9
This is the early 2nd century <em>cardo maximus</em> or main boulevard of Gerasa, today’s Jerash in Jordan, which is the best-preserved example of a polis or Greek-style city in Roman Palestine. Since the site is rather remote, some two hours north of Amman, Jerash is relatively unknown to most visitors. But as a model of a city in the Decapolis, it is without parallel. Mark reports that Jesus visited “the country of the Gerasenes” (Mark 5:1), which may suggest that Jesus dwelt in the territory of this city, or of the nearby town of Gadara.
Pantheon Studios, Inc.