The title of this post alone will put some branches of the Christian church immediately on the defense. The fact is, however, I travel all over this country coaching religious leaders and consulting with congregations of every stripe imaginable. And there is one overarching conclusion to which I've come: Christianity is dying. Or, to put it more accurately, the Christian church is dying while the Christian faith, in too few places still, seems to be slowly, but gratefully, morphing into something new.

Admittedly, there are a few churches that are growing in the U.S. Some are evangelical; others are Catholic, although most of their growth is largely the consequence of the influx of Hispanics who are, almost universally, Roman Catholic. To those blinded by illusion, however, the few churches that are growing has made some feel driven to object, particularly if they happen to be part of such a church, by saying, "The church is doing quite well, thank you!" 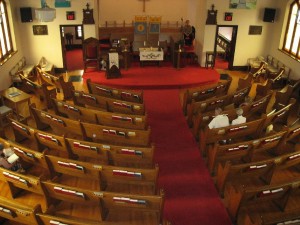 The truth is, it is not. And when church leaders are honest, and many of them are not, they will acknowledge that they are drawing most of their growth from the disaffected, disavowed and disillusioned who have left or leaving other churches. If you were to interview those who are leaving and going to these few growing churches, as I have, you would discover that for many of them, they feel spiritually disconnected and displaced, while still desiring to know and to feel a vital spiritual life. Unable to find it in much of the madness they've chosen to leave behind, they turn to these rapidly growing churches, many of which have become "mega" churches as a result of this phenomenon, in a kind of last ditch effort to find something that resembles spiritual sanity.

Regrettably, however, what many of them soon find even in many of these growing churches is just a polished-up and well-rehearsed, as well as well-performed, version of the same madness they left. Before long, scores of them wind up leaving even these and then join the ranks of those persons known today as "Nones" -- who are, by the way, now one in every five Americans. These "Nones" have all but given up on organized religion and now simply regard themselves as spiritual but not religious. It is to these and for these I regularly write and blog.

So, what do I mean by the statement, "the Christian faith seems to be morphing into something new?"

I do not mean by this a new religion. To the contrary, what I'm seeing is a new and refreshing emergence within the Christian religion itself. Perhaps, as at no other time in Christian history, except perhaps the first few decades following the death of Jesus, the church today is slowly becoming, but in too few places as yet, something that I suspect Jesus himself might actually recognize. There is within this new emergence an affinity for those matters of social and personal justice, compassion, spiritual wholeness and unity within and among all people and faiths. These were the obsessions of Jesus while here on earth.

I regard these few churches as glimmers of hope scattered here and there. So, what does this new emergence within the Christian religion look like?

1. This new, emerging church is made up of people who are desperately seeking ways of understanding, and in many cases, rewriting Christian theology. It needs to be rewritten. For decades now, the church has sought to survive on a doctrine of salvation that depended on the shedding of innocent blood to appease an obsessively angry God so as to rescue humanity from what would otherwise result in their conscious and eternal torment in hell. It's crazy theology. It is not what Jesus taught. And as a consequence, it is more pagan than it is Christian.

2. These new churches have a healthier view of their sacred text known as the Bible. They revere the Bible without making a god of it. Instead worshipping the Bible as a kind of "Constitution," as Brian Mclaren dubs it in "A New Kind of Christianity," they interpret the Bible for what it is: an inspired book, capable of providing inspiration, wisdom and spiritual direction, not a textbook on science or morality or answer-book preachers might use for "Stump the Preacher" talk-shows.

3. These Christians no longer feel the enemy is liberalism, even "secular humanism," as it is commonly labeled in the declining and dying branches within Christianity. Admittedly, they see dangers in any extreme notions, whether in liberal theology or humanistic philosophy, but they have awakened to the realization that the church has met the "real" enemy -- and the real enemy is the church itself. Furthermore, these Christians no longer believe gays will destroy the institution of marriage when heterosexuals have successfully accomplished that all by themselves. Waging war against gays, lesbians and those within the transgender community is like trying to defend slavery. Furthermore, these have given up the church's war with science and psychology, choosing instead to embrace the truths science teaches us, not only about the origins of the universe, but about the complexities of the human mind, human development and sexuality.

4. Further, I see this new evolving Christianity being birthed in the hearts of sincere and devoted Christ-followers who are open to what other religions can teach us about spirituality, too. They would regard, for example, Desmond Tutu's statement "God is not a Christian," as the truth. While affirming that "God was in Christ reconciling the world to himself" (2 Corinthians 5:19), and cherishing that belief within their own faith confessions, these Christians would embrace and, in fact, do embrace the spiritual insights that may come from Hinduism, Buddhism, Taoism and scores of other spiritual traditions. They have exchanged the insanity of the dying church that insists "We're right! You're wrong," for the sane "We're in and you are, too" approach to human and religious solidarity. Together, these Christians seek spiritual awareness -- spiritual enlightenment -- and they seek the good of all people, too, even those who embrace no religion.

5. Finally, but I could go on and on in my observations, this emerging new Christianity no longer interprets Christian "hope" as some "pie-in-the-sky" future paradise that they alone will enjoy, along with those who agree with their theology, their eschatology and their exclusivist beliefs. No, these Christians would view "hope" the way Jesus their leader viewed it; the way the prophets of old viewed it; the way the entire biblical narrative views it: as a vision of the world wherein peace and justice and plenty for everyone exists in the here and now; a world that reflects "God's will on earth just as it is in heaven" (Matthew 6:10); a world where all people are treated equally, cared for, respected, fed and nurtured for the wonderful creations of God that they are; a world where all people regardless of color, sex, race, religion, political party, nationality or sexual orientation have a voice and a place; a world where people and nations, as the Prophet Isaiah put it, "beat their swords into plowshares and their spears into pruning hooks; where nation no longer takes up sword against nation; where war is no longer learned" (Isaiah 2:1-5).

It is this kind of church that will emerge and thrive. The others will die a slow and agonizingly painful death.

For all the reasons above, and a host of others, spirituality is thriving both inside and outside these new and emerging expressions of the Christian faith. For me, and a growing number of other progressive-minded Christians, that is a cause for hope.