Would you bet your life on the truth of Christianity? You'd be rational if you did. At least, that's what philosopher Michael Rota argues in his new book Taking Pascal's Wager. He follows seventeenth-century philosopher Blaise Pascal in the claim that "It is rational to seek a relationship with God and live a deeply Christian life, because there is very much to gain and relatively little to lose" (12). 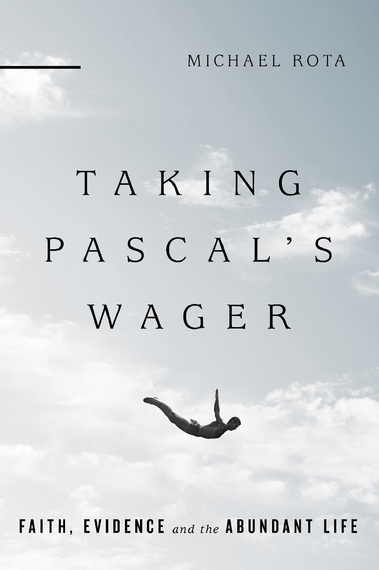 Rota divides his book into three parts. In part one, Rota strengthens and updates a version of Pascal's wager, which claims that if Christianity is at least 50% likely to be true, it's rational to commit to living a Christian life. In the second part, Rota relies on developments in philosophy of religion during the past forty or fifty years to argue that Christianity is in fact very likely true. Finally, in part three, he demonstrates the beauty and desirability of living the Christian life by telling the story of three exemplary Christians: Dietrich Bonhoeffer, Jean Vanier, and Immaculeé Ilibagiza.

Pascal's wager compares two possible states of reality: that the Christian God exists or that there is no God and no life beyond the grave. Given these possible states, a person can either commit to the Christian God or not (where committing involves choosing to pursue a relationship with God). If she commits to God and Christianity is true, she not only maximizes her chance of eternal life with God, but she increases her chance of living a successful life now. That is, based on recent psychological and social data, Rota claims that religious people are healthier, happier, more satisfied with life, have more stable marriages and families, volunteer and give more, and even live longer (!). But if she commits to God and Christianity is false, she faces lost opportunity because of time spent committing to God, a sense of loss of control over her life, and a possible disruption in her personal relationships due to serious religious commitment.

On the other hand, if she does not commit to God and Christianity is true, she maximizes her chance of spending eternity away from God, causes God grief, fails to show God gratitude, is less likely to be aware of God's love, is less likely to help others attain salvation, risks regret over a misspent life, etc. But if she does not commit to God and Christianity is false, she doesn't waste time committing to God, increases her sense of control over her life, and risks no disruption to her relationships because of serious religious commitment. However, she also decreases her chance of happiness and satisfaction in life, of having a stable marriage and family life, and of living longer. The upshot of the wager, given the potential gains and losses of these various outcomes, is that one should commit to God.

But things don't all come up smelling like roses for Pascal and Rota. Many have offered serious objections to the wager over the years. (I'd bet that you have a few.) For example, even if it's more rational to commit to a relationship with the Christian God than to live as an atheist if those are the only two options, we don't find ourselves in that position in our pluralistic society. Rather, we must ask: should I commit to Christianity or Islam or Judaism or Buddhism or Sikhism or . . . ? In other words, we must update the wager in light of all these other religions. And the risk of committing to Christianity and being wrong now includes the possibility of punishment in the afterlife by the god down the street.

Rota considers this objection and gives a compelling response. He recommends sifting through the various religions and making a commitment to the religion that seems the most likely to be true. (As it turns out, we need not fear punishment by the neighboring god if it doesn't exist.) This process is difficult, but important. In fact, I believe that discovering the meaning (or lack thereof) behind it all and living in light of it is one of the most important processes we can go through in this life. And here's where part two of his book comes in. Rota does not simply say, "Have at it!" but offers compelling reasons for God's existence and the truth of Christianity. He concludes that Christianity is not merely 50% likely (or worse when we consider all the other options and assign them an equal likelihood), but, in fact, very likely true.