Both of my Palestinian guides helped me understand that here in the Holy Land, "religion" is a matter of both faith and culture. Muslims, Jews, and Christians who don't practice their family's faith still embrace that tribe or clan as an identity. Even non-practicing Christians wear a cross to indicate their culture (not their faith). And it can be devastating for a young person to marry out of their faith. On the other hand, someone told me, "I'm a Christian. My friends are Muslim. For us, it's cultural more than religious. When we get old and scared of death, then we become more religious."

The whole religion vs. culture thing is interesting to me, as there are so many intersections between my Lutheran/Norwegian heritage and the Catholic/Irish or Catholic/Italian or Catholic/Filipino heritage of my friends and loved ones.

In Palestine, where Christians are an important minority, Christians tell me they don't feel treated like a minority. Among Palestinians, one's Arab-ness trumps their Christian-ness or Muslim-ness when it comes to identity. But in Israel, Arab Israelis report to really feeling treated as if they're a minority.

While Christians make up only 8 percent of the Palestinian population, the constitution of the country requires that the mayors of two leading cities, Ramallah and Bethlehem, be Christian. My guide, Kamal, is a Christian, as is Palestine's Minister of Tourism (the Christian quota for the cabinet is 10 percent -- and, since she's also female, she's a twofer in the diversity game).

The per capita Christian population of Palestine is shrinking. I asked the Minister of Tourism whether, if there were only one Christian left in Bethlehem, that person would be the mayor. She said, "Yes." 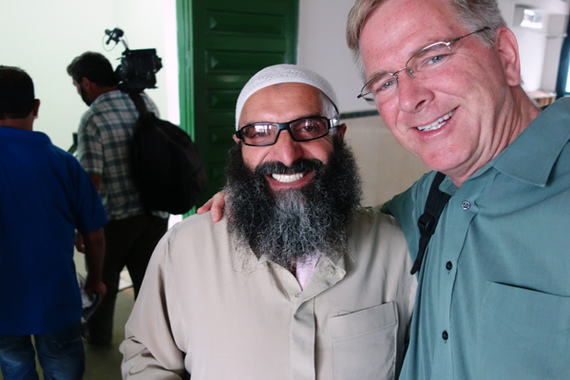 For over a thousand years, a mosque has shared Bethlehem's Nativity (or Manger) Square with a church. Jesus and Mary are both a big deal for Muslims. After filming a prayer service in a mosque, I sat cross-legged on the carpet for a joyous interview with this imam. He explained, "Bethlehem is holy for Muslims as well as Christians. For Muslims, Jesus is the #2 prophet. We also revere Mother Mary, who is very holy to Muslims. In fact, an entire book in the Quran is named for her." I asked him to let me hear how he talks to God, but in English, and his prayer literally brought me to tears. As we hugged, I could feel the pull of Islam.