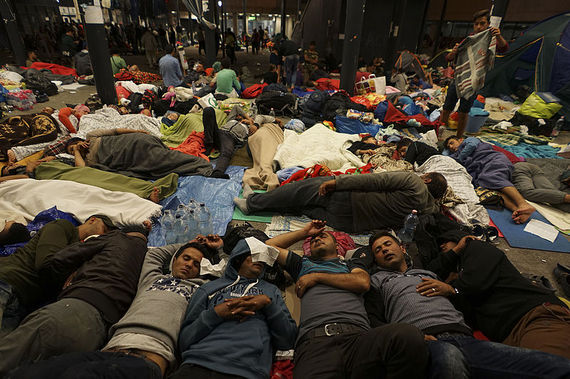 It is a tradition for people in Christian culture to cry foul and commence launching jeremiads whenever some cultural event transpires that fails the test of being "Christian" or comes across as adverse to customary (usually Evangelical) Christian culture.

Recently, Starbucks' move toward exclusively red cups during the months of November and December instead of drink containers emblazoned with reindeer and snowmen caused some in Christian culture to interpret the caffeine vessel adjustment as a "War on Christmas." Some promoted the decision as further evidence that a kind of secular, anti-Christian illuminati is waging combat against Christianity in America.

The Starbucks red cup absurdity is one cultural happening in a long line of instances where those in Christian culture perceive societal occurrences as aggressive toward their faith and values. Anytime a movement in culture ensues that remotely resembles being even slightly opposed to perceived Christian values, a community erupts. From alleged threats of taking the words "under God" out the Pledge of Allegiance to suspected endeavors to remove "In God We Trust" off our money to many involved in Christian culture expressing their displeasure with the media's observed treatment of outspoken Christian and noodle-armed quarterback Tim Tebow, those in Christian culture can often seem like ambulance chasers hovering around cultural shifts, ready to defend and preserve Christian "values" - or attack when necessary.

By this point, I hope you've taken note of my phrasing. I haven't said it is Christians anxiously hopping on Facebook to chime in about the "War on Christmas" or forwarding lengthy opinion columns that rant about religious decline over e-mail. I've referred to these people as "those involved with Christian culture" because it is a semantic and philosophical distinction that must be made. It isn't Christ-like (which is what a Christian is called to be: a follower of the teachings of Jesus Christ) to live frenzied and afraid of tyrannical cultural opposition.

In a September essay published in The New York Review of Books titled "Fear," Marilynne Robinson writes, mainly, about gun ownership and violence in America in an attempt to make a point about fear's incompatibility with Christianity. Robinson makes two main points:

The first is that "contemporary America is full of fear."

The second, she poses, is that "fear is not a habit of the Christian mind."

Citing Scripture that directly comments on the irreconcilability of "fear" with "Christian," Robinson writes:

"As children we learn to say, 'Yea, though I walk through the valley of the shadow of death, I will fear no evil, for Thou art with me.' We learn that, after his resurrection, Jesus told his disciples, 'Lo, I am with you always, to the close of the age.' Christ is a gracious, abiding presence in all reality, and in him history will finally be resolved."

Robinson's assertions about Christianity and fear are perceptive and challenging and ultimately comforting reminders that in Jesus Christ the Christian has life and victory, not death and defeat. Thus, the only response in practical living for the Christian is to exist in a posture of hope and love: a spiritual ecosystem in which distress and trepidation - or fear - cannot survive.

I say this about Christians and culture and recall Robinson's essay on Christians and fear because I think American Christians need to make a distinction and be instilled with a new dedication, especially in our continued "Age of Terror."

Christians in America should not be so worried about being a Christian nation, but instead recommit themselves to being Christians.

On the other hand, if one places value on being a follower of Jesus and tangibly living out the commands of the Gospel, there is no room for fear: and no place for apprehensive sensitivities about the movements of culture. And if your Jesus is made weaker by the color of a cup, you don't know the right God.

The issues that arise out of Christians in America being stricken by fear - a characteristic that is not only not endorsed, but is spoken against by Jesus - ascend somewhat trivial scenarios about red cups and popular culture. There is a debate in the Christian community right now about whether or not America should let Syrian refugees who are fleeing mass destruction and violence in their home country into our nation. Embarrassingly, many who claim Christianity have called for rejecting Syrian refugees and closing our borders to a people deeply in need of security and sustenance.

The only possible reasons a Christian could have for not wanting to allow Syrian refugees to enter America are grounded in and constructed out of fear. Some have speculated that ISIS might be infiltrating America by way of refugees, while others have asserted that an influx of refugees might hurt the US economy. Both of these claims - logical and valid or not - result from fear, which means they are antithetical to Christ.

Any reaction that's anti-refugee in America isn't a Christian response at all. It can't be.

Contemporary Christians in America need to seriously consider their posture of fear. It might be human nature to fear, but fear is not Christ-like, nor does a posture of fear align with anything Jesus taught. Christians in America - Christ followers who take the teachings of Jesus seriously - must reject the impulse to fight trivial culture wars; or, if they cannot give them up, at least make sure that following the teachings of Jesus are the foundation for everything they believe and do, not brash commentary or trepidation about changes in culture.