MABALACAT, Philippines – Hundreds of barefoot Filipinos marched on roads, carrying heavy wooden crosses and whipping their backs until they bled on Thursday in an annual gory religious ritual as the mainly Catholic Philippines observed near the end of the Lenten season.

Many Filipino devotees perform religious penance during the week leading up to Easter Sunday as a form of worship and supplication, a practice discouraged by Catholic bishops, but widely believed by devotees to cleanse sins, cure illness and even grant wishes.

“I do this penance out of my free will because I believe that God will help relieve my sickness,” Corazon Cabigting, a domestic helper and the only woman in a group of about 50 men carrying wooden crosses on their backs.

Like the men, Cabigting wore a maroon robe and covered her face with a veil, held on her head by a crown of stainless wire, dragging a 30-kg (66-lb) wooden cross and stopping every 500 metres (546 yards) in makeshift roadside chapels.

Elderly women chant the passion of Jesus Christ at some of the chapels, while the penitents, with their hands tied to the cross, are beaten by sticks and hemp.

“Priests often tell us that we should not be doing this,” Melvin Pangilinan, an organiser of the annual Lenten ritual who carriede cross in his younger days, told Reuters. “But, it has been our tradition for decades and we have to honour it.”

In nearby Angeles City, bloody gashes from repeated strikes of whips could be seen on the backs of devotees as they walked barefoot along the streets, believing that their sacrifice would somehow grant salvation for their sins.

Devotees, begin the ritual by tying a rope around their arms and legs and inflicting wounds on their backs with a blade marching for about four to five hours under a scorching sun.

Carlito Santos, a pastor at a local Methodist Church, said the practice cannot be easily relinquished as it has already been embedded in the local culture.

“It is easy to change these religious practices by asking these devotees to refrain from practicing it, but, because of culture and tradition, it does not always work,” he said.

Monsignor Pedro Quitorio, spokesman for the Catholic Bishops Conference of the Philippines, said the Church has discouraged the practices, describing them as “inappropriate”.

“What happens here is that we want God to grant us what we wish for,” Quitorio told Reuters, saying it is enough for true Catholics to pray, fast and give alms during the Lenten season.

Over 80% of Filipinos practice the Catholic religion. 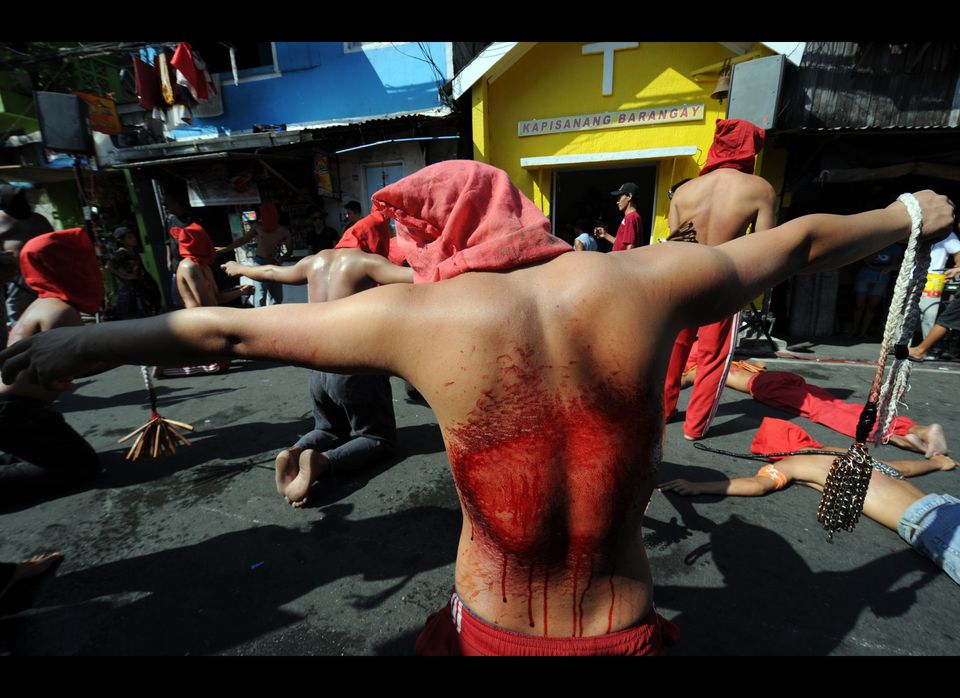 1 / 17
Extreme Acts Of Penitence
Penitents flagellate themselves as part of Lenten observance in Manila on April 5, 2012. The dominant Roman Catholic church frowns on flagellation and other extreme acts of penitence including gory Good Friday reenactments of the crucifixion of Jesus Christ, but devout Catholics say it is a means of atoning for their sins and to implore God to spare them and other members of their families from illness or bad luck. AFP PHOTO/TED ALJIBE (Photo credit should read TED ALJIBE/AFP/Getty Images)
Getty