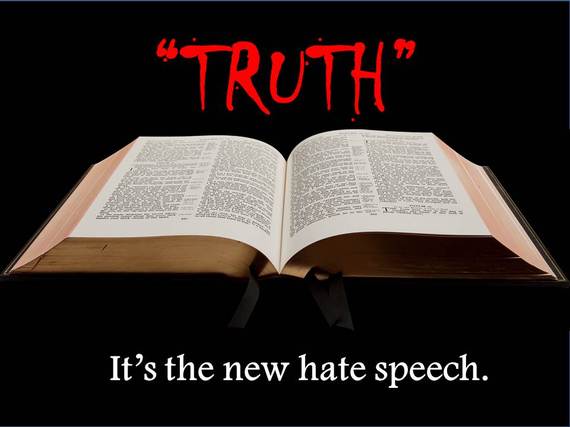 A few weeks ago I wrote a piece called Jesus: the First Transgender Man. It was a satirical look at how fundamentalist Christians point to the creation of Adam and Eve as definitions of what being male and female means, when arguing against the rights of transgender individuals. The backlash to the post was huge. Numerous conservative and Christian news outlets wrote about it, YouTubers with hundreds of thousands of followers lambasted it, and radio talk show hosts discussed it on air. The satire was missed by many, and the outpouring of vitriol was staggering.

I expect people to object when I write provocative pieces, and I'm happy when they do because it opens the door for discussion. Many Christians don't have the opportunity to talk with followers of Christ whose views differ from their own. We tend to remain within our particular Christian ghetto, communicating with people whose views on faith are similar. So I looked forward to people's objections and the discourse that would follow.

What I didn't expect was the degree and volume of absolute hatred that was projectile vomited all over the internet. Vomited by Christians; self-proclaimed followers of He who is love.

I began taking screen shots of the most outrageous posts. When the onslaught grew torrential, I posted some of the ugliness on my personal Facebook page, sharing my shock and disbelief with friends and family. Here's a small sampling, taken from Twitter, Facebook, personal message, and a variety of comment threads.

Some threatened or wished violence against me:

Some of the comments were just ad hominem nastiness: 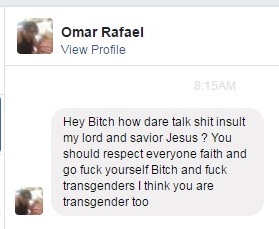 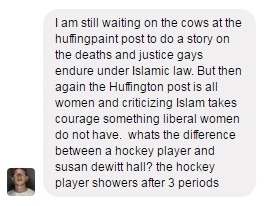 Some were directed toward liberals as a whole:

Still others were anti-women, anti-Jewish, and anti-LGBTQ:

To add to the horror, a transgender woman wrote to thank me for writing the piece, saying:

"We trans see so little positivity these days. It can be very discouraging. My family is very religious, and there are several pastors. My cousin was sentenced to life in prison for molesting kids as a Baptist youth minister. My entire family has since said he is less of an embarrassment and abomination than I am. That is what I hear pretty consistently from evangelicals."

This woman is simply trying to live out her life the way God, who doesn't make mistakes, designed her. And in doing so, she is considered by Christians to be worse than a child predator.

I started writing this post on the feast of the Visitation of the Blessed Virgin Mary. The readings for the day included her Magnificat, in which she proclaims "My soul magnifies the Lord." I love this imagery; of how Mary's embracing of the Holy Spirit's gift within her allows it to multiply and blossom, of how God grows through her and is magnified. In thinking about that wonderful multiplication of Love, I couldn't help but contrast these fundamentalist-leaning Christians. They also magnify something, or someone, but that person clearly isn't Christ.

People who love me suggested that I should stop reading the vile comments, and stop posting them. One friend said that doing so was causing division within the body of Christ. But I didn't stop. The more I read, the more outraged I became. Not at the misguided extremists who sit ranting and raving behind their keyboards, but at moderate Christians. People who would never think of typing such things.
These good-hearted followers of Jesus Christ speak voluminously about the sinfulness of being gay or transgender. Some of them even say LGBTQ individuals can't be Christian. And they love to proclaim:

I'll bet I've heard the phrase, or variants of it, hundreds of times.

Wake up and realize that not all who claim to walk in The Way are gentle. Or kind. Or moderate. Next time you are in conversation with a gay or trans person, don't just proclaim that you are confronting them with the truth of their sin as you understand it. First remember the ugliness which I captured from numerous people in numerous places around the internet. The screenshots above are just a handful of examples. Remember that this is a tiny reflection of a very large world. Then start your conversation by apologizing for the ugliness, violence, and hate that gay and trans people really do receive from the Christian community.

And maybe even consider going after the deafening crowd of rage-filled voices who fling the words of the accuser, and talk to THEM about what it means to be Christian.

My wife and I pray for the hearts and minds of those who spew filth in the name of Jesus Christ. We pray for those who turn away from Christianity because of it. And we pray for moderate Christians to look deeper at their God, and to recognize that He cannot be constrained to a box the size of a book.

Save the link to this post and share it the next time you hear someone say that speaking the truth in love isn't hate.