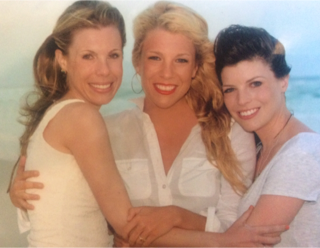 Once at a family reunion, when I was 16, one of my aunts, upon seeing me, loudly announced,

I suppose I must have chunked up a bit since she last laid eyes on me. It was Thanksgiving 1979 and I didn't touch a bite of food the rest of the day. At 16, I had zero knowledge or awareness of the eating disorder epidemic that was about to sweep the country. I just knew I wanted in.

My aunt's comment ignited a resolved determination in me that ran unchecked for many years. I clearly remember thinking, "Over my dead body am I going to be BIG like the rest of you!"

I was in good company because every girl I knew had "body issues" in the 80s. Seems like everyone was a dot somewhere on the spectrum, even if it didn't entirely run their lives. There were anorexics, bulimics and they even coined the term "bulorexic" for the girls that couldn't quite commit.

I'm not exactly sure what I was - I was never "good" at any of it, but I obsessed about it nonetheless. I weighed myself 5 or 10 times a day. The obsession ruled my days and dictated my moods for far too long.

You know how it goes, if I weighed a pound or two over, I was surly and depressed, if I weighed in at my target or lower, I was lighter than air with a joyful personality to match. It was a roller coaster.

I guess I was lucky that it never detrimentally affected my health, as I never fluctuated more than a few pounds throughout my life except the five times I was pregnant. Obviously, I wish I had known then, what I know now. I'd go back and re-live some of those days in a heartbeat.

By and by, my generation started having children of our own. A lot of us had daughters. We vowed we would do anything to protect them from an eating disorder. We didn't want another generation of women to feel like their entire self-worth on any given day was determined by that number on the scale.

I fell all over myself when my girls were little trying to make sure the messages they received were always positive with respect to body issues, standing sentry over my husband and my mother, making sure they always used terms like "healthy" and downplayed the notions of "fat" and "skinny."

Once when my two oldest daughters were little, my mom took them shopping. When they arrived home, they couldn't wait to gush over their new outfits and tell me all about their shopping trip. Later, privately, my mom went on to comment that one of my girls "insisted on squeezing herself into a size 10, when she was clearly a 12" and everything was just "falling off" my other daughter.

My mother and my aunt's generation merely lacked some necessary sensitivity training in this area.

My mom was quickly won over, and of course she was the least of my worries as the years went by. I was like a salmon fighting upstream against a heavy current of media influence.

I even went so far as to hide the evil scales under my bed, in the same fashion as the king on Sleeping Beauty. Upon hearing his daughter's inescapable fate, King Stefan proclaimed, "Burn all the spinning wheels!" But no mother or king can entirely eradicate every threat to their princess's well-being.

Fast forward 10 or 15 years. My daughters are grown. The really hard work is behind me. As women, my girls display a healthy, balanced attitude towards weight and body image. We all talk openly, so I know it crosses their minds, but angst over an unrealistic ideal isn't running the show on the daily. They've all got better things to do with their lovely minds.

Sometimes it seems like our society has come a long way in this area and other times, not so much.

This week Christie Brinkley won the internet with a bikini photo shoot of herself at 63 posing with her daughters. She looks amazing and they're even saying Sports Illustrated might give her the cover. I like the idea that a woman in her 60s can still be considered a sex symbol, so I must admit, half of me is rooting for her...

The other half of me resents feeling like I need to get to the gym - pronto.