The many retoolings of NBC's "Up All Night" have reportedly taken their toll on Christina Applegate.

According to Deadline, the actress is leaving the sophomore NBC comedy, which is produced by Lorne Michaels. “It’s been a great experience working on 'Up All Night,' but the show has taken a different creative direction and I decided it was best for me to move on to other endeavors,” Applegate said in a statement. “Working with Lorne Michaels has been a dream come true and I am grateful he brought me into his TV family. I will miss the cast, producers and crew, and wish them the best always.”

Deadline reports that NBC is looking to proceed with the series and could be looking to "Friends" alumna Lisa Kudrow to replace Applegate.

"Up All Night," which also stars Will Arnett and Maya Rudolph, has gone through many growing pains since its premiere in September 2011. In its second season, "Up All Night" ditched Rudolph's character Ava's talk-show to create "smaller, lower-key home stories." In October 2012, with ratings sagging, NBC announced that it it was rebooting "Up All Night" from a single-camera to a multicamera series and upping its episode order to six.

Applegate appeared on "Jimmy Kimmel Live" a month later and said the show is going through "a metamorphosis ... a big one." Then, she joked, "None of us are actually gonna be on the show."

The comedy switched showrunners in December, as Linda Wallem replaced Tucker Crawley (who had replaced Jon Pollack) and NBC revealed that the show was scheduled to resume production in February in front of a live studio audience after a three-month hiatus.

In January 2013, "Up All Night" creator and executive producer Emily Spivey left.

According to The Hollywood Reporter, "Up All Night" is scheduled to return to NBC in April or May.

NBC told HuffPost TV they had no comment on Applegate's departure at this time.

PHOTO GALLERY
'Up All Night' Season 2
Download
Calling all HuffPost superfans!
Sign up for membership to become a founding member and help shape HuffPost's next chapter
Join HuffPost 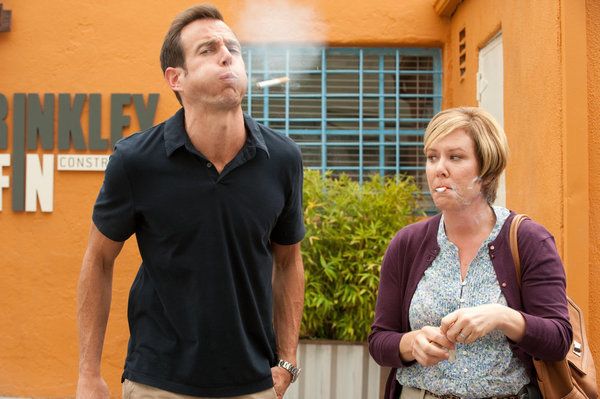