It's just six minutes of random videotape from 13 years ago as the kids decorate a Christmas tree. It's funny what passes for nothing at the time but turns into family legend. 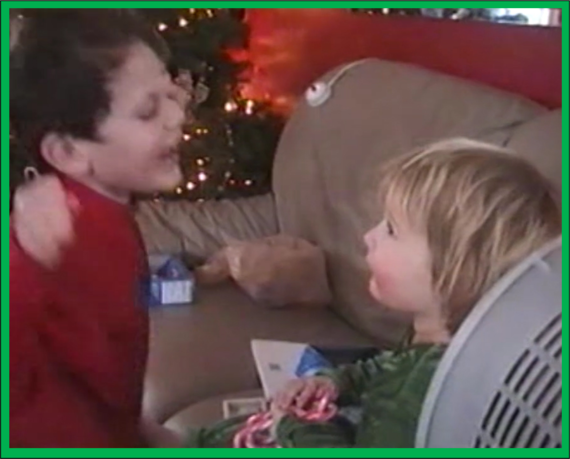 The 2000 model of Abby (3) and Aidan (5) had decided it was time to add the candy canes to the tree. As a kindergartener, it was very clear to my son what the pecking order would be -- and not just for tree-trimming. My daughter, in a calm "no," simply vetoes the maneuver and moves to the front of the line when dad asks for a song.

She continues to ignore her brother, whose attempts to bastardize the classic "Rudolf the Red Nosed Reindeer" seem to be bothering only the director...

So Abby gets center-stage, while she continues to tackle the perplexing candy canes-in-the box puzzle -- glancing up at the LCD screen to be sure she's still framed correctly.

But will older-brother allow this performance to be unblemished? Well, what are older brothers for, if not to illuminate the younger, dumber members of the family of the fine nuances of lyric-accuracy and politically correct methods of addressing St. Nick's weight problem.

Even as a 3-year-old, Abby learned immediately how to handle a bullying coach -- act like you don't hear him, even if he's moving into the shot, tapping you and even screaming your name for the neighbors to hear.

Ever the clever predator, Aidan quickly realizes that the song lyrics may not be the performer's motivation. Her audience is the motivation. The "ah-hah" look in his eye as he carefully blocks her out of frame is countered by Abby's steadfast commitment to ignoring the pest. And, as Effective Parenting Step #1 is no good, Step #2 is needed. (I sometimes wonder if Neanderthals had to threaten their kids with being sent to their caves.)

Now, try dragging the kids out of their rooms and you're in for a battle. So, Dad decides to try another song. Aidan counters with what appears to be a rerun until he once again proves how little control his father really has. Gene Autrey's estate may very well sue over the subtle replacement of the word "reindeer" with "candy cane." If you listen, you'll hear it (all while being given a rendition of the Charleston in MC Hammer's pants).

The song picks up speed when Aidan realizes that he's got a rogue backup singer. (And I probably might have sounded a little more enthusiastic with my monotone cheers.) It was a sad day when my daughter lost her Elmer Fudd-like voice. Unlike, Daffy Duck's nemesis, however, she manages to keep singing and keep her cool while being body-checked.

So now it's time to move from the solos to the duets. What a perfect opportunity for a lesson in teamwork! Two can share the spotlight, certainly, right? (But if your partner fails you, you can certainly provide your own backup.)

In our next song, there is little friction. They are co-existing. Perhaps this has been a wonderful learning lesson. We all CAN get along.

Then, as Abby is pulled back from Rudolph Version 3.0, Aidan visits the dark-side, imagining the desolation of all Christmas trees--all at the whim of a psychotic serial cane.

That same week, I did realize a good moment when I heard it. I burned the audio to a CD along with real Christmas music and gave it to my family that year. But it wasn't until very recently, when I was converting these 8mm videotapes to digital that the kids actually saw what they were doing.

Now a senior and a junior, I stuck my good-natured kids once again in the same spot for a little flashback. And, with a bit of role-reversal, you can see who's hijacking the other's performance.

Our cameras come out so often this time of year. And somewhere along the way, you move from "Rudolph the Red-Nosed Candy Cane" to drivers' licenses and college decisions.