It may not be the star of Bethlehem, but there’s a bright green comet passing Earth by just in time for Christmas.

On a clear night, you might even be able to spot it with the naked eye ― if you know where to look.

Comet 46P/Wirtanen, a.k.a. “The Christmas Comet,” passed within 7.1 million miles of Earth on Sunday, its closest approach. But it should be easily visible for much of the coming week and even beyond.

“This could be one of the brightest comets in years,” Paul Chodas, manager of the Center for Near-Earth Object Studies at NASA’s Jet Propulsion Laboratory, said in a news release.

The approach gives astronomers “an important opportunity to study a comet up close with ground-based telescopes, both optical and radar,” Chodas stated.

According to NASA, the comet will be in the constellation Taurus near the Pleiades. Look for a blur in a Christmas shade of green, which will slowly move across the sky:

If you can’t find the Pleiades cluster, stargazing apps can help you locate it. Of course, darker skies and clearer nights will also help.

The University of Maryland has posted some charts and more tips to help spot the comet, and an observer at the Griffith Observatory in Los Angeles has compiled a chart that will assist West Coast skywatchers:

Here's a chart of comet 46P/Wirtanen, optimized for the west coast. I hope you have clearer weather and darker skies than Los Angeles has right now! The best viewing time is after moonset before full moon (on 22nd) and before moonrise after that. pic.twitter.com/t9tabWgaM3

EarthSky and Sky and Telescope also have some pointers for spotting the comet, which was named for astronomer Carl Wirtanen, who first observed it in 1948 at the Lick Observatory near San Jose, California.

The comet should be visible for between two and eight hours per night over the coming year, NASA said. The best time to see it with the naked eye will be this week. After that, you’ll need binoculars or a telescope.

On social media, people shared their own observations:

How photographer Tommy Eliassen turned a pine into a Christmas tree with the help of the Christmas comet 46P/Wirtanen on December 12, 2018 in Bleikvassli, Norway https://t.co/OgABf2qhh6 pic.twitter.com/uYGRKwv5cA

Super excited to get a photo of Comet 46P with Kona and to share my first images with the @Sigma_Photo 40mm f1.4 ART lens! Check my post for full info on finding the comet and a closer look at the lens! https://t.co/F93ZJwWxW8#sigmaphoto #dellxps #comet46p #sandiego pic.twitter.com/H5brYXd1SD

Just quick shot of Comet @46PWirtanen from the garden before the inevitable clouds rolled in. 46P is visible to the eye and it showed up easily in this 15 second exposure at ISO3200 (18mm lens). #Northumberland #christmascomet pic.twitter.com/4QeWuWjPbF

Christmas comet, 7.1 million miles, we can see it today without telescope #christmas pic.twitter.com/gQiyvTYNlX

Come on comet. Give us a Christmas miracle and destroy Earth. I believe in you comet pic.twitter.com/D1ulVYMWw1 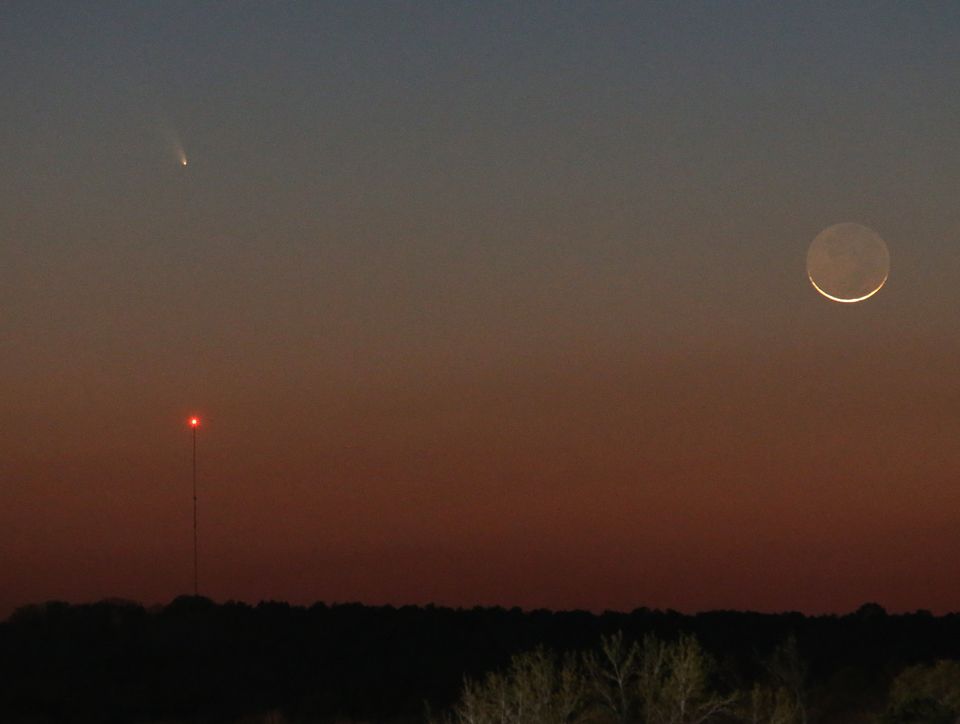 1 / 26
Comet Pan-STARRS Moon
Comet Pan-STARRS is seen over the tower on the left as a 1 day waxing crescent Moon is seen setting in the Western sky on Tuesday, March 12, 2013. The dark side of the Moon is lit by reflected light from the Earth, and is called Earthshine. (AP Photo/Dr. Scott M. Lieberman)
AP