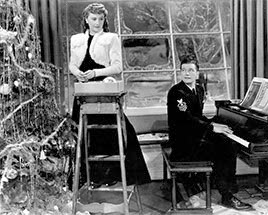 Peter Godfrey 's Christmas in Connecticut (1945) is a winter's version of Midsummer Night's Dream. In the movie which played as part of the Stanwyck festival at Film Forum, Christmas Eve, Stanwyck is Elizabeth Lane, a single journalist who lives a hand-to-mouth existence, but whose doppleganger is a doting wife and mother who cooks delectable meals for her patrician husband in a Connecticut farmhouse. Stanwyck had previously demonstrated an aptitude for playing double-faced characters. In Preston Sturges's The Lady Eve (l941), which was the second part of the double header, she's a grifter who disguises herself as an aristocrat. But fantasy is the lingua franca of Christmas in Connecticut, which begins when the survivor of a torpedoed American vessel, floating in the middle of the ocean, dreams he's being served an elegant French meal. The conceit is carried forward in the hospital where a nurse reads Lane's column in Smart Housekeeping and dreams up the scheme of luring one of her charges into marriage by having him transported to the fantasy Connecticut manse for the holidays. It's interesting to note that the kind of journalistic chicanery that Stanwyck's character practices, which usually has rather severe consequences, is here the substance of romantic comedy. One wonders if the props for the movie are stored somewhere on the Warner Brothers lot, since the setting is an iconic never never land and the ultimate house with the white picket fence. Sleighs are pulled by horses and sleigh bells announce the guests. But when all is said it functions a kind of magic retreat, like Shakespeare's forest in Midsummer Night's Dream, where Jefferson Jones (Dennis Morgan), the recovering seaman, Alexander Yardley (Sydney Greenstreet), the magazine publisher, John Sloane, the ill-fated suitor and Felix Bassenak (S.Z. Sakall),a restaurateur, who is the resident Puck, all converge.The bucolic setting is belied by the potent and even revolutionary effects produced by the imaginative goings on within. This minor masterpiece is not like any Christmas you will ever spend in Connecticut.

This was originally posted to The Screaming Pope, Francis Levy's blog of rants and reactions to contemporary politics, art and culture