My family is separated by roughly 600 miles. When it became time to leave the nest, my sister went west while I came south. During the past two years, we have enjoyed a rekindled relationship as I am sure is common when a family member sails turbulent seas. Tragedy has a way of stripping away the veneer of the inconsequential and revealing that of true worth. Family, friends, love, goodness, joy, fellowship -- those are things of significance.

We quit exchanging Christmas gifts between adults long ago and focus on the children instead. I once came upon a toy so loud and obnoxious that I knew her home was incomplete without it. It was an ambulance that screamed, "In an emergency, dial 911" at an outrageous decibel. I considered it my service to her.

My nephew could barely talk at the time, but after he got the present from Cool Uncle Mark, he certainly knew who to call if mommy took a fall down the stairs. That gift paved the way for cash-only Christmases.

It never seemed like a big deal until this year. I suggested to my lovely wife that instead of sending cash through the mail, we could put money under the tree for our children and they could do the same for theirs. The problem didn't hit me until she said, "We would still have to send them $20."

We used to have four.

Christmas is like a tumbler full of mirth at its finest. When family and friends come home to celebrate the cheer of the season, you drink to your heart's content and are filled by its warming sway.

"Tragedy has a way of stripping away the veneer of the inconsequential and revealing that of true worth."


When you are hurting, the tumbler has a jagged edge. Your attempts to avoid the broken glass often fail and you are forced to drink your cheer from the chipped side of the cup. You can still get the expected, pure taste of joy, but you might cut your lip taking it in.

Other partygoers with intact glasses assume that it is easy to spot the barb before letting it touch your mouth, but often it slips past your sight and the holiday warmth is replaced by the metallic taste of blood.

I knew getting decorations up this year would be hard. I also knew we would run into special items that brought Kylie's sweet face to mind. I was prepared to be sad when the carousel, large plastic Pooh, and her ornaments were unpacked. The Santa hat she wore for years was bound to cause a tear and her stocking makes me pause each time I pass.

But there have been so many holiday surprises -- jagged edges.

For instance, it always took two vehicles to get our Christmas tree. I would have it loaded in my truck which only seats five, while mom hauled the kids in the minivan. This year as I walked to the truck expecting to be alone, I noticed the rest of the family following me. While I was surprised, they had done the math and knew we would all fit.

I hated doing the elf on the shelf thing! I hated it with a passion... yet now I miss it so badly.

I didn't like tiptoeing around the Santa issue either. You have to be bright to keep a secret of that magnitude and I have never been accused of luminosity. Over the years I let slip so many stupid things that nearly gave the whole thing away. We made the decision to let our children be children and believe as long as possible... even if one quite possibly got to high school unsure.

At last check, Kylie believed and thought people who didn't believe were just wrong. Never one to be judgmental, they could be wrong if they wanted to -- it was okay with our little elf. 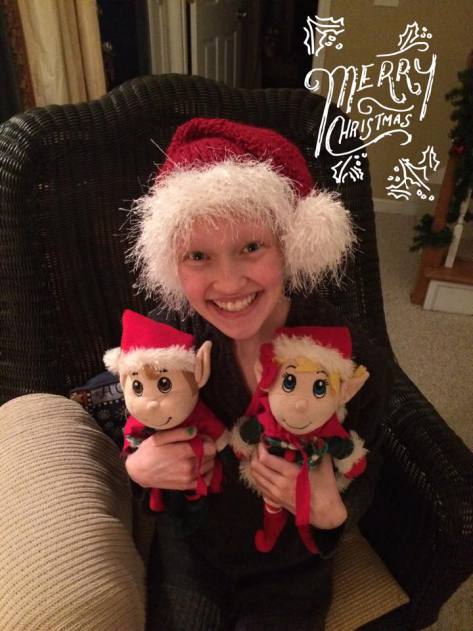 A typical December 23 would find us scrambling for the final presents. We joined Amazon Prime one year because it was the only way to get Christmas delivered on time. The fact that this year we were done shopping on December 8 should be a good thing. Only it isn't. It simply reminds us that was have a quarter less presents to buy.

Christmas cards. Such loving reminders of people who care about us. Our mailbox is full every day. The cards of impressive families were delivered in early December while ours were almost always a kind of New Year's surprise. I do enjoy the cards. But now when I see their smiling faces all I can see is complete families whereas ours is not. Don't stop sending them -- this is a "me" thing, not a "you" thing. Forgive us, though. There will not be a reciprocal card from us this year.

"I want people to have a Merry Christmas. I really do! But being surrounded by joy at a party is nearly suffocating."


Gatherings are nearly impossible. I want people to have a Merry Christmas. I really do! But being surrounded by joy at a party is nearly suffocating. I've never been claustrophobic, but I can now imagine what the overwhelming urge to break out of a confined space feels like.

I know I am not the only one hurting at the holidays.

As I have considered this aching I have for Kylie, I have stumbled upon four truths about Christmas this year that I would like to share with others who are hurting, grieving or lonely.

So let us raise our glasses to the smooth side, drink in every bit of Christmas joy we can scrape together, knowing that the decorations will soon come down and maybe, just maybe, next Christmas will hold a bit more merriment.

More:
healthy livingcancer losing a childChristmasfather-daughter relationships
Newsletter Sign Up
The essential guide to taking care of your mind and body
Subscribe to HuffPost’s wellness email
Successfully Subscribed!
Wellness delivered to your inbox