It's not just your neighbors who can see your Christmas lights. The combined effect of holiday lights in cities and suburbs is so powerful that the difference from normal lighting conditions can be detected from space.

NASA reports that satellite images show certain cities shine between 20 percent and 30 percent brighter during the holiday season. And out in the suburbs, some areas shine as much as 50 percent brighter.

"It's a near ubiquitous signal. Despite being ethnically and religiously diverse, we found that the U.S. experiences a holiday increase that is present across most urban communities," Miguel Roman, a research physical scientist at NASA Goddard and one of the leaders of the study, said in a news release. "These lighting patterns are tracking a national shared tradition."

In this map, the green dots represent areas where lights are up to 50 percent brighter in December: 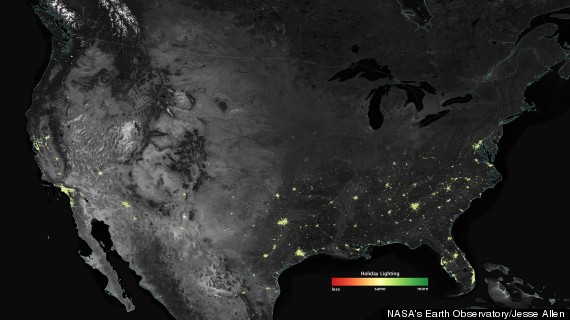 Another NASA map shows the difference between cities and suburbs. While the cities of Washington, Baltimore, Richmond and Virginia Beach are covered with yellow dots representing more modest boosts in light levels, the surrounding suburbs are green, indicating much larger increases: 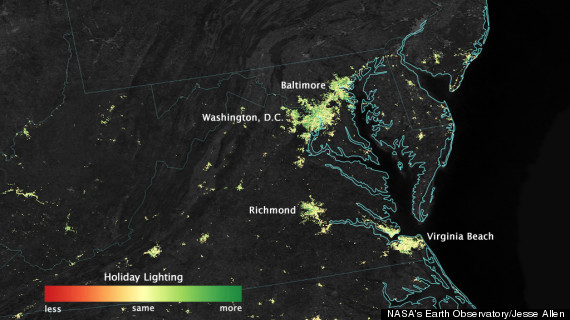 "Overall, we see less light increases in the dense urban centers, compared to the suburbs and small towns where you have more yard space and single-family homes," Eleanor Stokes, a NASA Jenkins Graduate Fellow and co-leader of the study, said in the news release.

The effect isn't limited to the U.S. during Christmas. In fact, the researchers first noticed the difference in light levels in images of Cairo taken during the Muslim holiday of Ramadan.

The researchers say the images show one way people make decisions with energy.

"More than 70 percent of greenhouse gas emissions come from urban areas," Roman was quoted as saying. "If we're going to reduce these emissions, then we'll have to do more than just use energy-efficient cars and appliances. We also need to understand how dominant social phenomena, the changing demographics of urban centers, and socio-cultural settings affect energy-use decisions."

Roman told ABC 7 in San Francisco that a future satellite may be able to tell the difference between traditional lights and more efficient LED lights, and help them track changes over time.

"So that we can also detect the greening of our nation," Roman told the station.