This Christmas, I put up a big tree. It was a five foot tall Fraser Fir -- the first large Christmas tree I had decorated in ten years. My friends encouraged me to go all out. I had survived a massive heart attack and two heart-related surgeries in the space of six months. My friends told me it was time to celebrate. I had lived through my ordeal for important reasons, they said. One special one -- to experience the holidays in all their splendor. And so I have. There's nothing like the smell of a real tree. The pine scent filled the room as I listened to holiday music. One of my friends helped me thread the blue and green twinkling lights. I carefully placed a variety of ornaments on my "arbol de Navidad." There were globes enscribed with the words from the Christmas song "The Twelve Days of Christmas." There were also cherubs with wings, smiling snowmen and angel in swings. My friend gave me an ornament depicting the Empire State Building. I hung delicate glass icicles on the boughs. And under the tree I spread out a bejeweled skirt. It belonged to a close friend's mother who had passed away. It was part of her Christmas tradition, and now it was a part of mine. I arranged some gifts under the tree -- but also a small embroidered red box. It had special meaning. Inside were the ashes of my dog and best pal, Nicky. He passed away in September. My doggie had celebrated 14 Christmases with me. Now Nicky was gone, but I felt he was certainly here with me in spirit. I stepped back and appraised the tree. It wasn't just a nicely decorated tree you might see in a store. It was deeply personal and festooned with ornaments I had collected over the years. Most were blue and silver. And each one brought back a special Christmas memory. 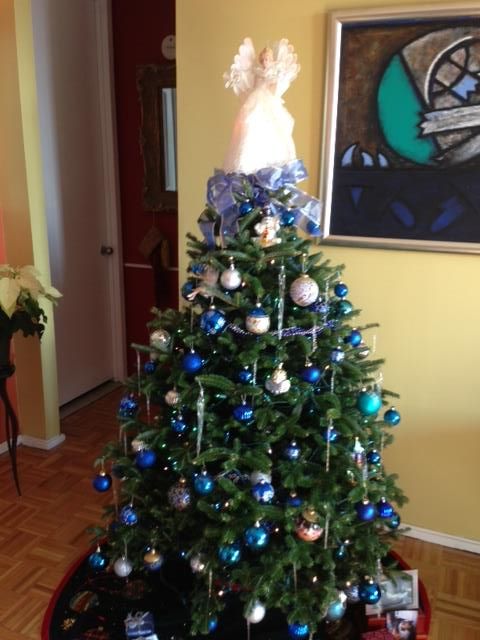 In previous years I had substituted the tree for a Christmas setting on my dining room table. I would prepare an improbable holiday tableau (an angel next to a nutcracker prince and a stuffed animal doggie wearing a Santa hat looking over the Baby Jesus in a manger). And as I placed these symbols of Christmas next to each other, I thought of my father. He taught me that there is no Christmas setting that is incongruous as long as it comes from the heart. And after all, isn't Christmas the time when tacky triumphs (plastic garlands, aluminum-colored icicles, tiny lights set on a timer)? Let me explain further.

Two years ago, at Thanksgiving, I traveled from New York to Hialeah to celebrate the holiday with my parents. My father (who is 85) takes care of my mother, 90, who has Alzheimer's disease. It can be a heartbreaking experience, but my father doesn't believe in self-pity. He believes that if you follow a routine, the act of going through the motions -- however mundane -- offers its own rewards. I recall that every afternoon at precisely the same time, my father fed my mom applesauce in which he had ground all the pills she needs to take for the day. He did this with a bright smile and many times, he told me, my mom rewarded him by singing an indecipherable tune. He may have never heard the song before, but he loved it.

And this brings us to Christmas. Every year for as far back as I can remember, my father has relished the art of preparing for Christmas. That year -- despite the death of some close relatives and the stress of being my mother's constant caregiver -- was no different. And so when I arrived at the home where I had grown up, he was eager to show me how he had decorated the house.

He led me by the hand and walked me outside to the front lawn. He showed me the foldable carboard Santa holding a sign that read "Merry Christmas." Next to that is a snowman who greeted passerby with "Let it Snow." Not far away was another faux Santa who proclaimed "Happy Holidays!" In front of those figures were three-dimensional and brightly lit foldables of an angel, Mary, Joseph, Jesus and the Three Kings. The foldable figures bathed in the glow of hundreds of twinkling lights he had arranged on the house in an intricate pattern. 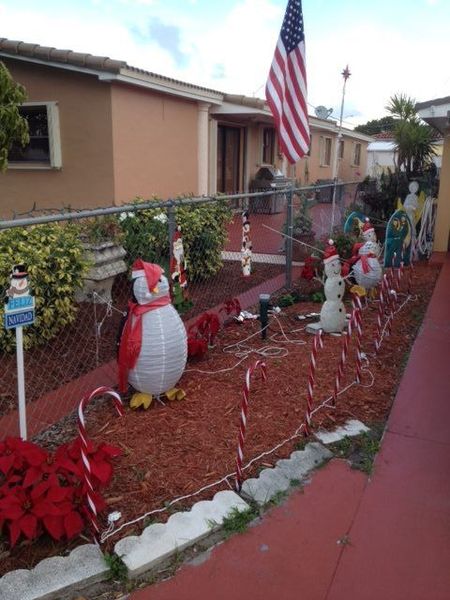 If you stepped futher back (almost into the street) the incongruity hit you harder. On one side of the home he had attached a tile of "The Immaculate Conception" to the wall. On the other side, there was a tile of Cuba's Patron Saint, the "Virgin of Charity."

This Thanksgiving, I went to visit him under very different circumstances. It was the first time I had seen my dad since my heart attack in May. He embraced me tightly and whispered in my ear, "so glad you're with us, son." He led me to my mother's room. She smiled broadly as I walked toward her. I felt myself beginning to cry. She looked so frail and weak. She weighed about 90 pounds. My mom seemed like she was disappearing before me. But then I looked into her eyes. Although she didn't recognize me, her face brightened. It was still my same beautiful mom. Alzheimer's could not change that. I turned to dad. I asked him why he had not put up Christmas decorations. "I'm a little behind this year," he said. "But soon, soon," he added. My mother's illness has worried him. It has slowed him down a bit. But this is a man who has always rallied for Christmas. A few days later, my brother sent me photographs of my dad's Christmas display. There were all the familiar Santas and snowmen and penguins, too. He waited this year but I didn't question why. Dad always knows best.

During these tough times, when many of us are hurting economically, it can be difficult to get into the spirit of Christmas. We are especially saddened as a nation by the tragic and senseless shooting in Newton, Conn. So many innocent lives were lost. And so many families will experience a tragic holiday. But there is still hope. The Christmas spirit cannot be extinguished. It is there in what we give others. It is there in the love we show our children, godchildren, family and friends. It is there in the lessons we teach. We are living examples. The spirit of Christmas may strike you in the sound of a child's laughter as he stands in line to see Santa at the nearest mall. Or the spirit of the holiday might fill your heart as you gaze in wonderment at decorations that may seem ridiculous but are really sublime. I know one thing, My father's face is filled with the spirit of Christmas. So there is no excuse to withdraw from the hub-bub and whirlwind of this special holiday. There can be no Bah Humbug! As cars drive up Hialeah's 62nd Street, they can see my dad's proudly decorated home, even from a distance. It shines bright like a star on top of a Christmas Tree -- as bright as a star over a manger in Bethelem. Tacky, you say. Incongruous? Perhaps. But my father understands the holiday. It lives in his heart. And he's taught me to make it live in mine.

And so that evening, Christmases ago, I arranged my "dad-like" setting of improbable Christmas figures and ornaments atop a round table, and tried to be as careful as my father. In the middle, I placed a large, cobalt blue vase filled with branches of red berries. Next to that, I put an angel dressed in blue with a glittery silver crown and beside her, a nutcracker prince. Laying up against the vase was a large Christmas ornament of Chiquita Banana. And in front of them all, a figurine of the Baby Jesus lying in a manger. Two little stuffed pets -- doggies wearing Santa hats -- stood guard. "Silent Night" played on the stereo. On that night ,it hit me: the Christmas spirit! It was there. It was really there. And it's here this Christmas too -- for all of us -- if we just open our eyes and our hearts. These are precious lessons learned from a Santa-like father at Christmas time. And these are lessons I cherish. 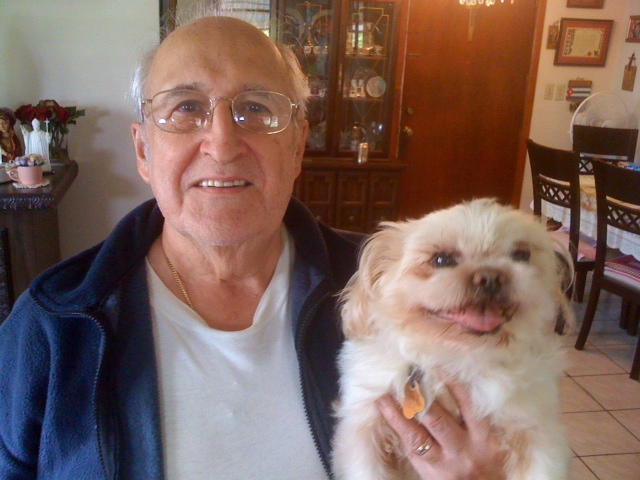