Every year, corporate lobbyists look for must-pass budget bills to attach riders to that help pad their companies' profits with specially designed tax loopholes or subsidies. These insider deals would make any normal ethical person blush, but they are part and parcel of a DC culture which has grown steadily more corrupt over the last 35 decades. However, this little article, which in any other era would have been widely reported and followed up on by other journalists, raises the question: Does this secret lobbyist meeting set a new record in terms of DC cynicism?

Here's what was reported:

In an audio recording of a strategy session obtained by The Intercept, major trade association lobbyists discussed how the refugee crisis has changed the political dynamics in Washington to their advantage.

In the conference call held last week, lobbyists representing a number of high-polluting industries agreed that the battle between Congress and President Obama on refugee policy will give them the cover they need to attach a legislative rider to the omnibus budget bill that rolls back newly expanded clean water regulation.

'I think that probably helps us,' one participant said, referring to the coming confrontation over refugee policy.

The White House has issued veto threats against previous attempts by Congress to block the Waters of the United States (WOTUS) rule, a regulation finalized this year that extends Clean Water Act protections to millions of acres of wetlands and streams. So attaching a rider blocking WOTUS to the omnibus was potentially going to attract a lot of attention. Until now.

Now, lawmakers are expected to attach a provision to the omnibus bill to block Syrian refugee resettlement -- a move that is bound to become the focus of any government shutdown confrontation between Congress and the White House.

'We're suddenly not the big issue,' said one call participant. 'I mean, this is all going to turn on refugees.'

'I think that helps us,' said another call participant. 'I think it helps us with the White House being on defense,' another legislative strategist on the call said.

The remarks were made during a political strategy call hosted last week by energy utility industry lobbyists.

Sadly, an old DC hand like me has to acknowledge that the answer to my question above is almost certainly no. As appalling as this is, conversations like this one happen every day in this town. Just as Wall Street has perfected new forms and levels of vulture capitalism with their "financial Innovation," too many of the big money lobbyists here in DC are this cynical a great deal of the time. They operate in a culture that says we can use any crisis and any tragedy to make a little (or a lot) extra money for our clients.

So beware the DC Christmas Tree. The energy companies are clearly circling. Check out this article by Carter Daugherty : Wall Street is circling, and while a few great people like Elizabeth Warren are determined to fight them off, she doesn't have enough allies. The Koch brothers are circling, trying to insert an amendment to lessen white collar to the bi-partisan and much needed criminal justice reform measure. All manner of other big money insiders are looking for their special Christmas tree deal as 2015 winds to a close.

As Thomas Jefferson put it 200 years ago, the price of liberty is eternal vigilance. Right now is a good time to pay that price. Don't let the ultimate cynics in DC get their way: When leaders like Senator Warren ring the alarm, we all better answer.

In token of the season, just to help you remember, here's this year's American Family Voices version of O Christmas Tree:

Lots of green when campaigns are here,
Also at budget time of year.
Oh, G-O-P, these Christmas trees,
on must-pass bills for spending.

Oh, G-O-P, these Christmas trees,
are gifts you're soon exchanging. 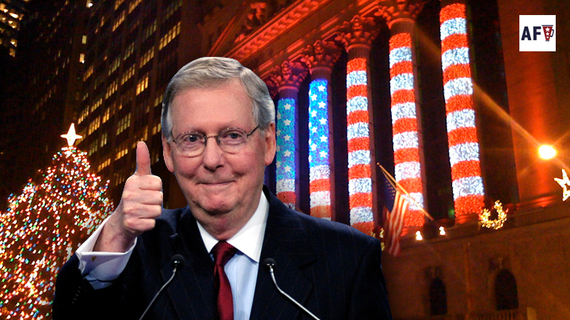