On May 5, the Edelman Arts gallery on Manhattan's Upper East Side opened its sixth exhibition of works by the English-born, Berlin-based artist Christopher Winter. Comprised predominantly of acrylic-on-canvas works from 2012, the show, as its title "Unnatural History" suggests, does much to distort -- both subtly and explicitly -- the set of expectations that we as viewers bring to works of art. Whatever your perception of reality may be, you'd do well to discard it at the door. To enter into the world of Winter's art is to actively accept constant flux, an instability predicated on the artist as conjurer of ritualistic, paranormal phenomena, mischievously experimenting with the laws of nature. 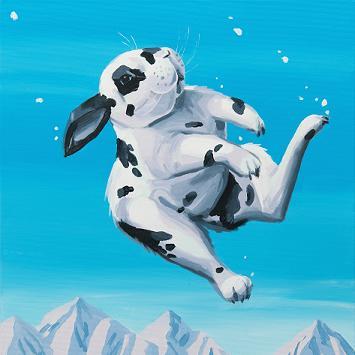 Most notably, "Unnatural History" features a suspension of the law of gravity. Humans fly over landscapes effortlessly. These images, as in The Hours and the Ages (Comfortably Numb II) are stirring yet static -- as if freezing a vivid dream that crystallizes in one's memory. Other works present dogs and rabbits in free-fall, suspended above snow-capped peaks in the wintry air. Unlike their peopled counterparts, however, these animal portraits suffer from both visual and emotional flatness. Lacking both the necessary implication of three dimensions and seriousness of intent, the results feel superficial and contextually vague. That said, some of the same figural themes and playful attitude can be found in the exhibition's more potent works. 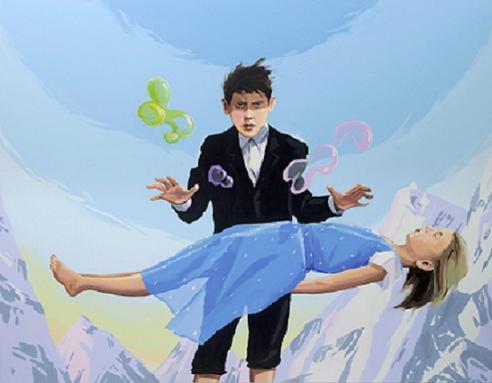 The Illusionist by Christopher Winter, 2009, acrylic on canvas; image courtesy of Edelman Arts.

The The Illusionist is perfectly emblematic of Winter's unsettling, beatific paradigm. Amidst the backdrop of the snow-covered mountains, a blue-eyed boy levitates a girl in a blue dress as he stares transfixed into the distance toward the viewer. Amorphous, vaguely animal bubbles float above the girl in a seeming reference to the floating/falling rabbits from the exhibition's Bunny, Dandy Hare, Fall Out, and Life's Full of Surprises. The sky above is composed of multiple shades of blue in concentric circles. The Paper Illusion (Abstract 1) and The Con Artist, also highlight the unwavering gaze of their respective subjects, and the acknowledgement of an "other," more elusive reality than the one with which we're most familiar. 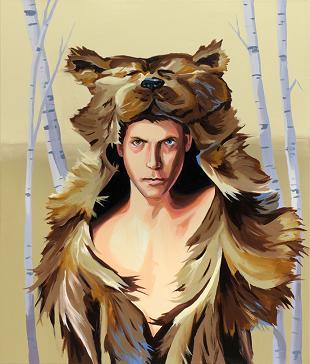 Winter's human forms showcase his authoritative use of shadow. The paintings are imbued with palpable tension, as if the viewer is suddenly witness to a series of mystical rituals -- precariously mixed with both wonder and dread. In the painting Unnatural History -- which focuses the viewer on the ferocious gaze of a young man clothed in a bear skin and headdress-- the artist is playing with motion and the abstracted shapes made by the highly stylized fur. The use of a pinkish red glow, emanating from an unknown source, adds a feral, fearsome aura to the solemn aggression of the subject. This title work of the exhibition comes across as a grim, sharply contrasting epilogue to the narrative told in the artist's playfully subversive series The Wildlife Suite, which was previously exhibited by Edelman Arts at ART MIAMI in December 2010.

The 20 watercolors that comprise The Wildlife Suite are fanciful , encroaching on the transgressive -- they depict a sexual mixer in the woods between people in bear costumes and people who are simply "bare." One of the pieces, WildlifeXII is an irreverent homage/parody of Édouard Manet's Le déjeune sur l'herbe. The landscapes are saturated in surreal colors shades of pink, midnight blue, green , and teal and striped with slender trees that seem to bend under the weight of the sky. The provocative series borders on being antagonistic in its display of brazenly carnal imagery, yet the multilayered sociopolitical commentary at work is undeniable. On the surface is a potential narrative about what happens when "furries" and nudists get together for some frenzied "yiffing." Both groups constitute subcultures that have been minimized by society at large -- perhaps the artist is casting a satirical look at how we sometimes view perceived "outliers" in an exaggerated and stereotypical light. One could also glean a decidedly political message -- a jocular response to the ludicrous suggestion made by some American public figures that legalization of gay marriage could lead to bestiality. While these meanings may not have necessarily been intended, they add intrigue to this thought-stirring series of works. 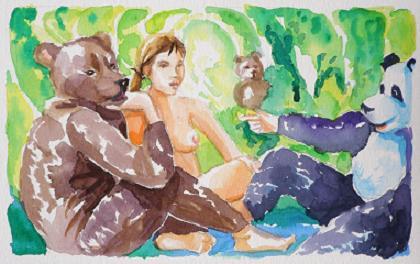 While much of the impact of "Unnatural History" is visceral, there is a more covert magic at work than the one that endows the rabbits in the artist's Hybrid paintings with zebra stripes and giraffe-like color patches. No, the deeper illusion is the way that Christopher Winter obscures the boundaries between the abstract and the representational. The more closely the viewer investigates, the more individual shapes and shadings divorce themselves from the objects they help to represent. Whether it be the unruly bear fur in Unnatural History , the splayed fingers of The Illusionist boy,or the vibrant streaks of light as they strike the bear costumes in Wildlife Suite, these details become in and of themselves miniature abstract paintings within the larger scene of readily identifiable figures.