Although there will be no panel for Adult Swim's "Superjail!" at San Diego's Comic Con 2012, which kicks off tomorrow, series co-creator Christy Karacas will be attending the convention and will likely be dogged with plenty of adoration and questions from hordes of cosplaying attendees.

Fans of the gory, psychedelic cartoon, which pushes all sorts of boundaries -- including, like many Adult Swim shows, those regarding sexuality -- have to wait only a few more torturous months until season three premieres in this fall. This season will continue to explore the Warden and the fantastical world of incarceration he created inside of Superjail, where space and time have proven fluid and there's endless potential for violence.

Season three has also seen the addition of a new writing director, comedic writer Janine DiTullio, who Karacas says has been "so great for the show... she really gets it."

Before heading to San Diego for Comic Con 2012, Karacas and DiTullio spoke with Huffington Post Gay Voices about queer characters in the show, homoerotic fan fiction, the upcoming season and what character they would most want to snuggle up with in a prison cell.

Check out the interview below, and visit our collection of LGBT Adult Swim characters as well as our interview with Venture Bros. creators, Doc Hammer and Jackson Publick, to fill your pre-Comic Con 2012 fix.

Huffpost Gay Voices: Although LGBT characters are becoming more prominent on television, I can't think of any network that has had as many shows featuring queer characters as Adult Swim. Janine, you have worked for NBC, CBS, ABC, MTV -- a bunch of heavy-hitting networks. What do you believe is different about Adult Swim that has made it more receptive to such a wide range of sexualities and gender variance?
Janine DiTullio: Well, Adult Swim is a relatively young network. It attracts creative people who don't pine to work in mainstream TV. Then on top of it, the network lets all these creative weirdos do their thing. We got one note this season. So, I guess the result is a less straight world.

Christy Karacas: I don’t think they’re openly trying to have bunch of gay characters but they definitely... the tone of their shows is not traditional. [It's] out there. I’m surprised other networks aren’t just copying it because they don’t really have any competition. It’s more of a big-picture thing. They trust their creators to make what they want to make.

In an interview from 2011, Christy, you said, “If [Superjail!] gets a third season, I’d love to combine the psychedelic randomness and violence of season one and the character development and storytelling of season two.” Do you think that the third season has achieved this? What can fans expect?
Christy Karacas: Definitely. I can confidently say "yes." To be honest, I don’t know how much I should go into details. The first season, it’s really visual and psychedelic and second season, we were really focusing more on the story and characters and we were doing it so much that we might have lost sight of... I feel like we had to go through season two to learn some things about the show. And Janine's our new writing director. She’s awesome. She’s been so great for the show, I think she really gets it, that we need to take a bit of both.

Janine DiTullio: Christy and Steve [Warbrick] created this amazing raw freaky show. Then in season two, Chris [McCulloch] helped add all this great character development and back story. And when I came in the consensus was, "Let’s make season three a combo of the two.” And I was like, “Good idea, we’ll order a bunch of food and everything will be perfect.” Then I woke up one day and the show was in production and everyone was doing multiple jobs. And I was like, "HOLY CRAP we have to finish this thing!" So, we’ll see. But, I’m excited.

Let’s talk a bit about Alice. Despite not saying much, she has become one of the most layered and most likable characters in "Superjail!" How have you developed her throughout the series, and what’s in store for her in season three?
Christy Karacas: She’s almost a teenage girl. She thinks she’s really beautiful. Deep down she wants to be this feminine woman. On the outside, she’s kind of rough around the edges. But it doesn’t matter. It’s what’s on the inside and that’s how we treat her and play her. I think people like her because she doesn’t give a fuck and she thinks she’s a hot beautiful woman and she’s going to own it.

The Gays, who were pretty minor characters in the first season, really developed in season two: they get married, we see the dynamics of their relationship come out and they almost take-up a parenting role to the other inmates. Will they be featured as prominently in the third season?
Christy Karacas: The Gays are kind of the most well-rounded characters. They’re a couple, they have direct character contact with each other. Paul is the more feminine, intelligent one. He’s more together. And Jean is the bad boy -- doesn’t give a fuck, is more sloppy. Just like any couple, gay or straight, there’s that kind of dynamic. They’re just easy to write for like that. They’re dangerous and they’ll fuck shit up, but they do seem very likable as well.

There’s an episode this season, where one of them is up for parole. It’s a very Jean and Paul-centric episode, where they are dealing with what’s gonna happen if one of them leaves. They’re two of our favorites.

In "Ghosts," gay countercultural icon John Waters made a cameo as "Chet," the 1000-year old Aztec-like priest. How did this cameo come about and what was it like working with Waters?
Christy Karacas: I couldn’t have been more fucking psyched. We found out he was a fan and we asked if he would do a voice, on a whim. He said something out-there like, “I love cartoons and I have a lot of friends that have been in jail.” He was super cool. The sad thing is that because we remote recorded him, we didn’t get to meet him or anything. He’s definitely one of my idols -- I like that blend when something is bad but good and trashy but smart. He’s a guy I was super-psyched that [he] actually knew what the show was.

Are you aware that The Warden and The Twins have inspired a good deal of homoerotic fan art and fan fiction?
Christy Karacas: Very aware!

What are your thoughts? Care to touch on the sexuality of these characters?
Christy Karacas: I fucking love it. It’s crazy! There’s tons of sex art of The Twins with each other and the Warden and the Future Warden doing things to each other. I’ve also seen every single character doing things to each other... it’s this crazy, weird sub-culture. The funny thing is, the people who do this can draw really well. It’s amazing in a way.

And I feel like whatever the Twins do for sex is something weird with food or crystals or some sort of appendage we don’t have. I guess they budded that guy, in "The Budding of the Warbux." But I would think something alien and strange. Maybe that’s an episode we could do, if we got a fourth season, with their sexuality changing.

With the exception of Alice, there aren’t many prominent female characters in the show. However, the second season ended with The Mistress taking control of the Superjail compound. Does this mean we will see much more of her and the UltraPrison crew throughout the third season?
Christy Karacas: Yes. We will definitely pick-up where it left off. They’re back. I wish they were in it more, I love the Ultraprison, but they’re definitely in a few episodes. The premiere is very sexual... people that you wouldn’t expect to get it on are going to get it on. I think the fans will be pretty psyched.

Last question -- if you could sleep with any character in the "Superjail!" universe, besides the Mistress, who would it be and why?
Janine DiTullio: I have a big crush on Ash. But if it went anything like my real life, I’d probably have a 5 year insane relationship with Gary and Bird, then settle down with Cookie.

Christy Karacas: I’d probably have to let Alice fuck me, just because it would be the ultimate... Why go be all pussy about it? Yeah, I’d have to say Alice.

Keep your LGBT Adult Swim fix going with Huffington Post Gay Voice's interview with "The Venture Bros." co-creators Doc Hammer and Jackson Publick, and check out queer characters from "Superjail!" and other Adult Swim shows in the slideshow below. 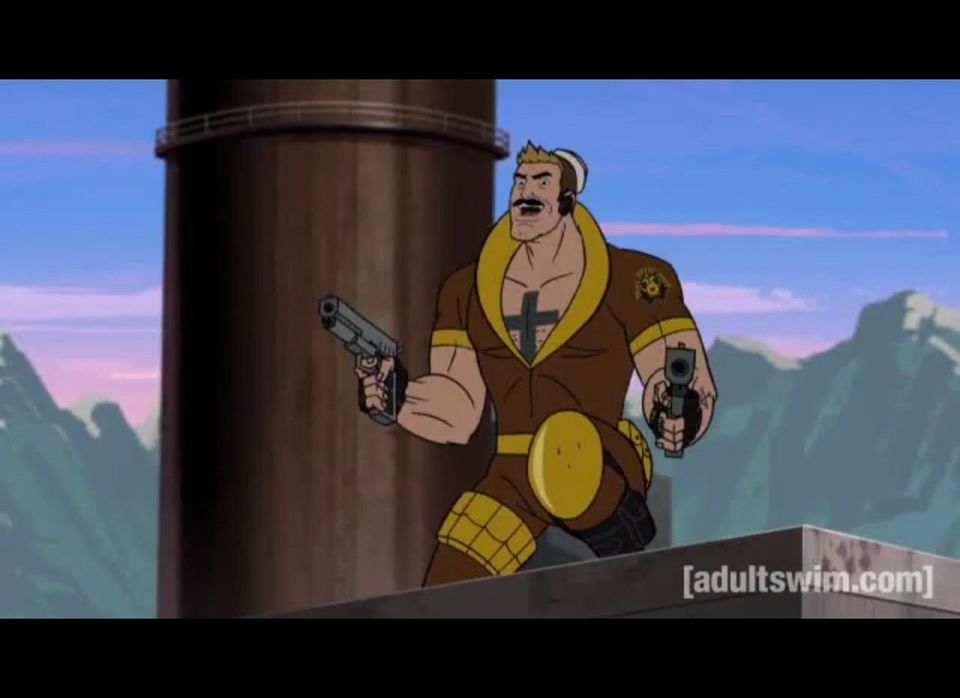