Google has announced a holiday-timed price cut to its line of Chromebooks, the little "Nothing but the Web" personal computers that run an operating system resembling the Google Chrome web browser. Prices on Wi-Fi only Acer and Samsung models will drop from $349 to $299, and the Wi-Fi and 3G Samsung Series-5 will go down from $429 to $349 in an attempt to bolster holiday sales.

The Chromebook interface will also get some minor tweaks, with the user screen getting a face-lift and the New Tab screen changing to reflect the recent changes in the Google Chrome web browser.

Here is what Chromebook users will be greeted with when they start up their machines from now on: 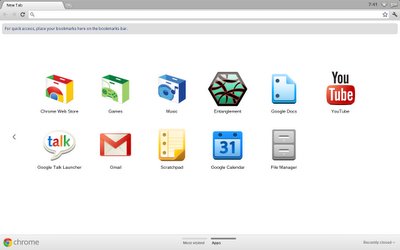 A post on the official Google blog describes some of these changes:

We’ve [...] revamped the New Tab page to make it easier to manage your apps, bookmarks and most visited sites. By popular demand, we’ve added a few handy new shortcuts to the New Tab page: a shortcut to the File Manager on your Chromebook, as well as to music apps and games in the Chrome Web Store.

Chromebooks were first unleashed into the world in June 2011 after a May introduction at the annual Google I/O event. Initial reviews of the Chromebooks were mixed, with many noting that though performance and booting were quick, the utility of these odd new netbooks was questionable in an age of cheap laptops and tablets. (Respected tech columnist Walt Mossberg, for example, wrote that the Chromebook, for better or for worse, "can do almost nothing unless it has an active Internet connection." Like Apple's iPad, Chromebooks come in both Wi-Fi only versions and, for a little more money and a monthly plan, a 3G-capable model as well.

Chromebooks are available through Google retail partners Amazon, Best Buy and Tiger Direct, though those sites have not yet updated pricing on affected Chromebook models as of press time.