I found out recently an old friend of mine, Whitney Dafoe, has a severe disease. He'd posted on his website that he was sick, but when he'd said "chronic fatigue syndrome," I thought that meant normal or mundane tasks overly exhausted him and that was the end of his affliction. I thought he'd get over it, eventually. The last message I'd received from him said, "Can't type," and from that point he sent little red hearts and links to songs by John Prine. That was Thanksgiving of 2014. 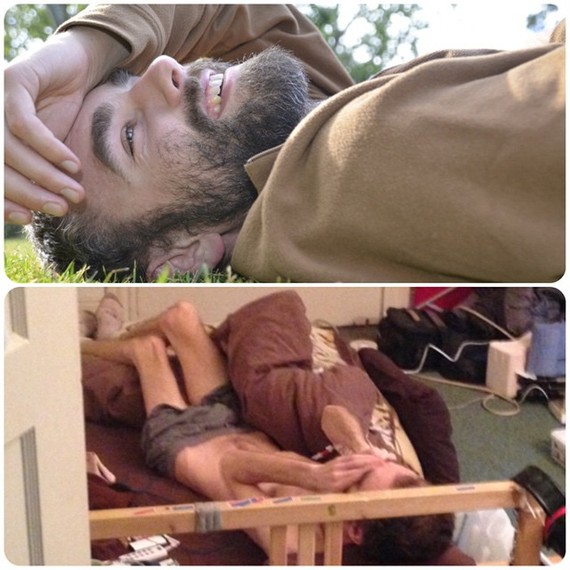 All this time, I hadn't taken his illness seriously, because I thought of it as that: an illness. In reality, it's a disease called myalgic encephalomyelitis that robs people of their lives, often leaving them bed-ridden and unable to care for themselves.

Whitney hasn't been able to speak since January of 2013. He no longer does much more than sit up in bed. He's unable to eat or communicate in any way. Like many of us would feel after running a marathon, and then the burning embarrassment of losing our pants in front of the crowd at the winner's circle, Whitney feels this from simply looking at lettering on a shirt.

His parents care for him full-time in shifts, along with a team of doctors and scientists who work to figure out what is wrong. "It's probably the last major disease that we don't know anything about," said Ron Davis at a recent fundraiser. "Because it's invisible." Davis is also Whitney's father and works full-time on researching the disease through the Open Medicine Foundation. He currently fights for funding to research for treatment for his son and the estimated million others who fight to accomplish normal activities.

For many people afflicted with the disease, who most call ME/CFS, or ME, it starts with a viral cold or flu that doesn't go away, and feeling like their body has turned to lead. Sleep does not make them feel rested, and it can last for months or in most cases several years. When patients go see a doctor, they are often told to see a psychologist. The 2011 PACE study out of Britain was met with great criticism in the patient community because it basically said a bit of a walk and therapy will cure people who meet the broadest definition of CFS: unexplained, extreme fatigue lasting for more than six months.

The danger in this study is not only feeding the common misconception that sufferers can merely "snap out of it" by changing to a more positive attitude and working their activity level back up to normal, it could be lethal to people like Whitney who have severe cases. Many people with ME describe "crashing" if they go over their limits, and oftentimes do not return to their previous levels of lingering health.

What needs to happen is awareness in showing how debilitating ME/CFS is and funds for finding treatment. Currently, the National Institutes of Health spends about $2,500 per person with HIV/AIDS to find a cure. They spend about $5 on ME/CFS.

In addition to being pushed aside by the NIH and discredited by doctors, people with ME find themselves incredibly isolated as friends, one by one, stop calling to check in. They are forgotten. Or, like I had done, friends assume they'll be on the mend soon enough. When people think of chronic fatigue syndrome, they imagine someone simply sleeping a lot or who's always tired. The stigma from that name, and the name itself, desperately needs to change. In reality, sleeping doesn't mean rest at all, and it's never enough.

"It's remarkable how insidious this disease is because the people who have it don't look sick," Davis said at the fundraiser. "So nobody believes them."

In Davis' call for action last year, he stressed the importance of validating sufferers' symptoms and to start at a place of observation. Instead of trying to fix the symptoms, scientists first need to figure out what, in fact, the specific symptoms are.

NIH has yet to announce their budget for the ME/CFS study they spoke of last fall. Before any major funding for NIH to study ME/CFS will occur, a drastic change in mindset needs to happen throughout the general population. We need to say "we believe you" to so many who have been told to simply cure themselves. We need to stand up for them and fight, because they can't.