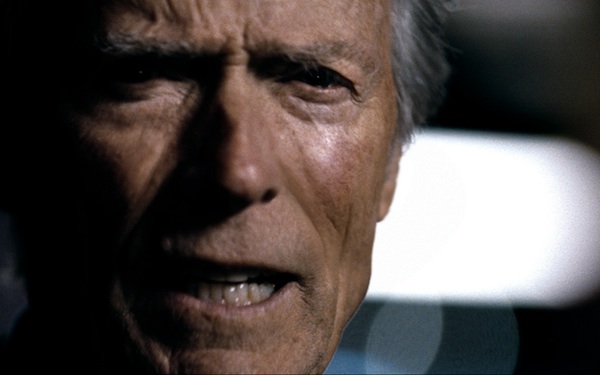 If we want to take visual politics and the integrity of imagery seriously, what Chrysler and its corporate Madison Avenue agency did in its Halftime in America ad can be best (and more easily) understood as anti-union rather than pro-Democratic party or pro-Obama.

Protesters are shown in front of a building that could be the White House or could be any number of state or government buildings across America. The footage is preceded by an apparently ranting news commentator and runs while Eastwood's gravely voice intones "the fog, division, discord, and blame made it hard to see what lies ahead." Ranting and protest equals divisiveness and distraction from the American mission.

Advertisement
Visual deconstruction of the ad shows
just how threatening
protest is to corporate America. Various writers have
discussed
and
analyzed
the alteration of this video from a Wisconsin pro-union, anti-Scott Walker protest rally to make it seem generic, more representative of general American discontent. If others have already called out the edited video, though, I thought it was important to take a slower and closer look not just at the screen shot in question, and particularly, the signs that were "disappeared" in the footage itself.

The screen grab and original image from the Chrysler ad comes from a viral video shot by photographer/videographer Matt Wisniewski. The scenes in the video were shot over three days of protest, from February 14 - 17th, at the Capitol Building in Madison challenging Gov. Walker's bill to limit collective bargaining by public workers and increase state employee pension contributions. During that time, citizens, students and union members also staged sit-ins at the Capitol Building and briefly took over the Senate Chamber. Teachers were prominent participants in these "Kill the Bill" protests which grew from 30,000 people to 70,000 by the 19th.

(If there's been an inclination to label this fleeting video as an Occupy Wall Street protest, by the way, it's important to note that this populist protests in Wisconsin pre-dated Occupy, which didn't get started until mid-September 2011, another seven months later.)

With the Chrysler ad in mind, there are a couple features to notice here, particularly the sign in the center with the hearts which reads: "Care about educators like they care for your child"; the sign far right which reads: "No to the bill. Yes to children"; the sign far right which reads: "MTI. Madison Teachers, Inc." in the center, circled by "We teach the children. Collectively we decide. United we act," with the word "Solidarity!" below; and also the abundance of orange signs that read: "Stop the attack on public education. Vote no!!"

What happened after Chrysler's ad agency doctored the footage for the Chrysler spot?

The children's poster now says: "Say no thanks. It's time [inside a clock.] We Don't need another." The poster far right now says "Think of our children" with the word "Los La" below it that looks strikingly like the logo of the LA Times. The teachers union sign and logo, far left, has been replaced with a generic circle with line through it over a face. All the orange "Stop the attack on public education" signs have been eliminated.

Also, as John Nichols at the Nation points out, the description on the statue was removed. As Nichols writes:

The Chrysler ad also disappears the identification on a statue of Colonel Hans Christian Heg, the Wisconsin Civil War hero who rallied a Scandanavian unit to fight for the union with the cry: "Norsemen...the government of our adopted country is in danger. It is our duty as brave and intelligent citizens to extend our hands in defense of the cause of our Country..."

Heg became a reference point for the hundreds of thousands of protesters who rallied at the Wisconsin Capitol in February and March of 2011, and who linked their activism to a tradition of answering the call to defend basic rights and ideals. Many of the largest rallies at the Capitol were held on the grounds where Heg's statue stands, including the rally featured in the Chrysler ad.

In the name of visual truth, here are scenes that offer clear looks at the imagery that was was eradicated. This is a screen shot from Wisniewski's sign.

And this is a photo by Marc Tasman, and featured on Wikipedia, with the caption: Firefighters led the protest into the Wisconsin State Capitol on February 16, 2011. Far right, you can see the MTI sign and the orange "public education" sign.

Sometimes when I'm lecturing about news and political imagery, visual persuasion and our mission at BagNews, a student will ask about our objectivity in reading photos "if the site is "pro-left." My reply is that the site, admittedly progressive, is not pro-left, but rather, "pro-image." Given that our agenda, most accurately stated, is to speak truth to visual power (1, 2), it's fair to say that we end up on the progressive end of things more often than not because visual persuasion and bias is typically the device and luxury of those in and with power, whatever branch of government, media entity, industrial corporation, or, yes, political party, we happen to be talking about.

With these goals in mind, it may be safer to say that Chrysler's
Halftime in America
ad is more accurately seen through the lens of doctored video footage to be a pro-corporate, anti-union advertisement than any other kind of political statement.