"I've written a couple thousand comic scripts and a dozen or so short stories in prose," Chuck Dixon says, but he never attempted a novel -- until he was given a deadline of only a month to do it in. The result was SEAL Team Six, which, over the past two years, has spawned four follow-ups (and counting).

Of course, Dixon was a well-known name in various fanboy circles long before his foray into prose. He started a love affair with comics almost exactly 30 years ago, working on well over 100 titles(!) and handling some of the most famous brands, from The Punisher to The Simpsons and, even, The Hobbit. He's written more pages of Batman than nearly any other person on the planet and is even responsible for creating a certain villain who has a penchant for breaking Bruce Wayne's back (and was recently featured in the latest Bat-flick, The Dark Knight Rises).

Now, however, Dixon is looking to strike out into new territory once again: self-publishing, with Bad Times: Cannibal Gold being his first experiment. And he's hoping that he's found some gold himself with his newly acquired creative independence. 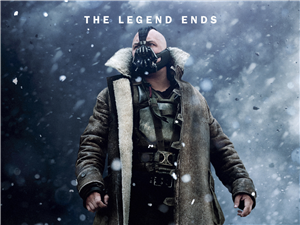 Why self-publish? I see this is, like, your tenth release in the format.

My other ebooks were published by Dynamite Entertainment. They wanted to hop on the killing of Bin Laden while it was still current and challenged me to write a novel about the Navy SEALs in 30 days so they'd a have a book for Christmas release. I've written a couple thousand comic scripts and a dozen or so short stories in prose, but I knew the only way I'd ever write a novel was if I was given a drop-dead deadline with no time for excuses.

The first book was well received, so DE asked for more. I've written five total, and we're talking about a sixth.

I thought I'd start a new series on my own. No publisher. No safety net. No one telling me what I couldn't do or giving me suggestions on how to make it more commercial (read: tedious).

I notice that you have an editor listed for Cannibal Gold. Isn't this rather unusual?

Jaye Manus makes it happen. She proofed the book, formatted it for Kindle, Nook, iTunes, paper and whatever other format is available. I wanted to include her in the solicits. It helps promote her service and her own work as an author.

What's the appeal in doing military stories? Is it the characters, the type of stories that can be told, the general setting?

I'm not into all that "hero's journey" stuff. I wanted an action story where being total badasses was the lead characters' status quo. Then throw them into an unusual situation that no amount of training or their own combat experience could prepare them for. 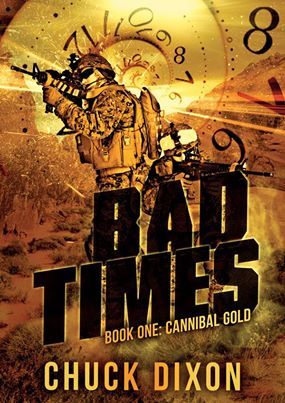 What was the initial impetus for the Bad Times series? Was it the premise itself, the idea for a particular scene, a certain theme?

It's a time travel story. A privately-funded experiment results in technology that can rip a temporary hole in time. The first team to go through travels to Nevada 100,000 years in the past, where they run into trouble and cannot return. A team of ex-Army Rangers is hired to go back and rescue them. What they find is a world dominated by really vicious proto-humans. It's the fight of these guys' lives, and the action builds from there.

Your writing is comprised of very fast, short sentences that barrage the reader in rapid fire. Is this more a deliberate stylistic choice or just your natural instincts as a writer?

How much of your prose is informed from your comic writing days?

Pacing, characterization, blocking out action, basic story structure are all the same. But I've always been intimidated by prose. Comics, I knew I could do. That's my mutant ability. But when you write even pulp prose, there's so much more to deal with. I've had editors encourage me toward prose. They told me it's the same thing without the pictures, right? But, in a way, it's still about the pictures. Now, instead of an artist interpreting my panel descriptions, I'm putting pictures into the reader's head directly. That may seem obvious to someone else, but to me, it was a revelation. I'm kind of hardwired for comics. The shift took time.

Why do this particular story as a novella as opposed to a comic? Or a screenplay, for that matter?

So I could get it done!

Comics used to be easy. You pitched something and if one publisher didn't buy it, another would. Margins are tight now, and few comics are profitable. So it's more like the Hollywood model of pitches and notes and so and so on while years crawl by. The same reasons I never wanted to write a screenplay are now present in comics.
The ebooks let me just write the damned thing, and it's out for public consumption within weeks. 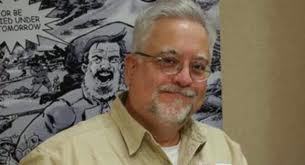 Do you have a set number of installments in mind for Bad Times?

It's open-ended. I'm maybe thirty days from completing the second novel and have the third and fourth outlined in my head.

How thoroughly do you outline before you write the first page of the book? Of the entire series?

I recently read a biography of P.G. Wodehouse. It included a letter from him in which he says that, after writing, like, 40 novels and hundreds of short stories, song lyrics, and stage shows, he began fully outlining his stories. He was, like, 60. So there's hope for me to start being a grown-up and start writing outlines instead of just diving in with a vague premise and a few scenes in mind.

When Dynamite threw down the gauntlet on the first SEALs novel, I just started writing. They called after a few weeks and asked where the outline was. I was already close to a hundred pages into the first draft. I told them they could have an outline in 30 days or the whole novel in 30 days. I delivered the whole thing in 28 days.

Can you walk us through the selection process you had for the title? I know some writers, like Joe Michael Straczynski, won't write a word until the title's been firmly chosen.

Writers are a crazy bunch, huh?

Bad Times seemed so simple, it's almost elegant. These guys travel back in time and things always go bad. They also visit eras where basically life is brutal and short. The blanket title just clicked after I got used to thinking about it. The subtitle, Cannibal Gold, took longer to grow on me, until I realized that I would read a novel with that title. It's so sleazy. Who can resist?