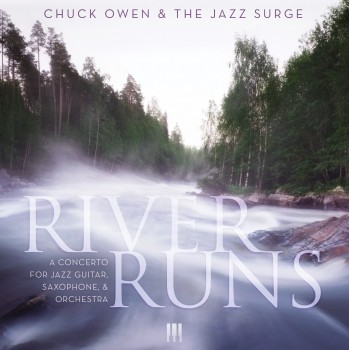 I have never had the opportunity to listen to Chuck Owen's music so as is my usual practice I placed the CD on my changer and plopped myself down on my couch clutching the liner notes that I usually read as I listen. As I started to read Mr. Owen composer's notes , where he will go on to describe the genesis of his creation for those who wish to have a more enhanced understanding of his creative process, I quickly come across his "spoiler's alert" shrouded appropriately in white water rafter's language "For those who prefer a single-person kayak to a guided raft or who simply want the experience of their first trip to be as pristine as possible...I understand, Meet you at the take out point." Translation: forget where it comes from or how you got there just enjoy the ride! I immediately put the notes down and settled a little more comfortably into my well-worn couch and immersed myself in Owen's fantastic river journeys. 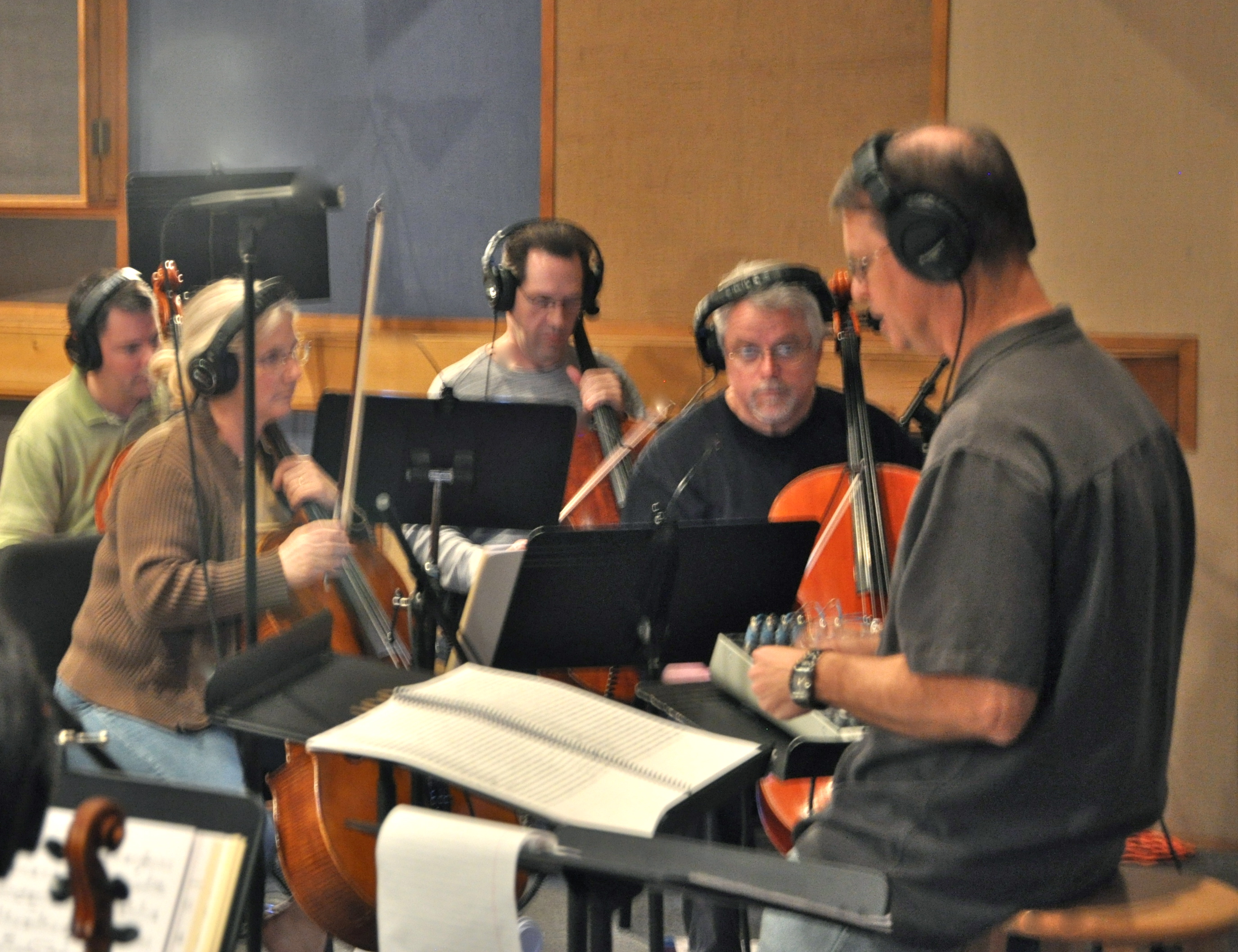 A little background on Mr. Owen, he is currently a distinguished professor of Jazz Studies at the University of Southern Florida, Director of the USF Center for Jazz Composition and Director of the USF Jazz Ensemble for the last twenty-two years. He has over fifty published compositions and has composed for orchestras as diverse as the Netherlands Metropole Orchestra to the Tonight Show Orchestra to Dave Liebman's Big Band.

Apparently Mr. Owen has also done his share of white water kayaking and rafting and his experiences on various trips and down several rivers are the grist from which he has made this delicious work of art. The five-piece movement is a Concerto for jazz guitar, saxophone and orchestra and Mr. Owen has created a masterpiece of aural sounds; a dazzling array of prismatic colors and textures that envelop the listener in a splendidly evocative way.

The prologue starts your aquatic journey and is titled "Dawn at River's Edge", a reference to the early morning breaking camp ritual of most white water expeditions. As the yawning bowed bass of Mark Neuenschwander stirs this pre-dawn scene, Owen brings in the rest of his strings, what sounds like a celeste, some willowy reeds, a harp and a tingling triangle. The orchestra is awakening just like the rafters are awakening to the day's journey ahead.

The First movement is entitled "Bound Away" and is a reference to a one time journey down the Greenbriar and New Rivers of West Virginia. The title is a reference to a line from the American folk song " Shenandoah" which the composer says is a source for some of the melody in the piece.With a crash of drummer Danny Gotlieb's cymbals , dancing chimes, piccolo's , flutes and some violin accents, composer Owen's introduces the dual lead voices of tenor saxophonist Jack Wilkins and guitarist LaRue Nickelson. The melody takes on a distinctive Americana feel with the addition of some tasteful fiddle-style violin accenting of Rob Thomas. The orchestra charges forward like a boundless river in a determined path down from its source to its mouth, never to be thwarted only to be marveled at and given over to. This orchestra is amazingly tight and yet marvelous supple to Owen's demands. Wilkins has a hard-driving sound that darts up, down and around in flurries of eddy-like currents, typical of any river route that only shows you it's hidden mysteries when you dare to release yourself to it. About ten minutes into the piece guitarist Nickelson, with his Metheny-like sound, creates a sense of wonderment with his probing and melodic runs. His mellow tone is like a brief calm a midst the rush. A deceptive calm appears, just like when a river widens for a stretch, giving you a sense of peace that lulls you for a bit before it reveals its next series of trickery. Nickelson switches to a more searing guitar sound and trades licks with Wilkins. Mayhem occurs as the travelers go down a particularly rough spot. The piece builds with an escalating sense of urgency, brilliantly paced by Gotlieb's driving drums and the tightly controlled orchestra.

The Second Movement is titled " Dark Waters, Slow Waters," inspired by the Hillsborough River in Florida. He describes it as a spring-fed waterway that lazily snakes through swamps covered with Spanish moss and drooping Cypress. The delicate guitar of Nickelson and the poignant violin of Rob Thomas pierce the shadowy scenery created by Owen's hauntingly eerie orchestration. This is journey that is decided more languishing, but filled with an apprehension and mystery that abounds around every bend in the river. The movement eventually takes on a Latinized beat which allows Nickelson and Wilkins to trade ideas over the resplendently lush orchestration. Owen's masterfully creates his cinematic music in such a way as to seamlessly meld modern jazz improvisation with more traditional orchestrations and the result is a marvelous amalgam of the two.

The Third Movement "Chutes and Wave Trains" is a reference to terms well-known by white water rafters. In this case Owen is referring to his experience on the Chattanooga River in Georgia and South Carolina. Chutes are rock formed narrows that funnel the water from a large body of water to a more narrow body of water creating an increase in flow and rapid acceleration through the chute. Waves trains are a series of bumps or waves that occur at the end of a rapid and give the rider a pleasant roller coaster-type ride. Owen starts the piece with a series of pizzicato strings and Gotlieb's crisp snare. The excitement of the upcoming cascade through the chute is built up by a series of string and bass created ostinato lines over which Rob Thomas plays an urgent and compelling violin solo. Funky guitar accents by Nickelson add to the delight of the sound. Saxophonist Wilkins trades lines with both electric bass and electric guitar, building the tension to the musical pinnacle of the piece. Rob Thomas's poignant violin is deftly inserted to release tension before the pizzicato violins create a series of waves in sync with Gotlieb's snare drum. Brass and reeds slowly enter building the tension once again as bass and cellos create a dark, foreboding background over which Wilkins and Nickelson create modernistic counterpoint. The interjection of such seemingly disparate sound elements work to great effect in the most dramatic piece on the cd.

The Fourth Movement "Side Hikes-A Ridge Away" is a beautifully conceived representation of the composer's experience of floating down the Colorado and Green Rivers in Colorado, Utah and Arizona. He finds himself in hereto for unreachable places, climbing to the top of a ridge along the way and experiencing the magic of unknown vistas and natural beauty. The piece is played with emotional power by Jack Wilkins whose tenor soars atop Owen's lush orchestral arrangement. For anyone who has exerted the effort to climb a peak so they can experience the unparalleled feeling of mystery, excitement and accomplishment one has in reaching the top, Owen's music will surely ring true.

The final movement in this suite is titled "Perhaps the Better Claim," a reference to a line from one of my favorite poems, Robert Frost's " The Road Not Taken," a copy of which is printed in the liner notes. The poem ponders on the choices we make in life and how they ultimately affect our outcomes. This is perhaps the most dazzlingly orchestrated piece in the concerto. The orchestra is remarkably precise as it navigates the quick changes in tempo and color that is demanded of them by Owen's marvelously powerful score. These talented musicians weave in and out of their parts never muddying each other's roles, working like a precision time piece and producing as beautiful a piece of music as Mr. Owen's fertile memory has composed. To anyone who believes that great orchestras don't exist beyond the big city markets, this talented group dispels any such notion.

For anyone who has experienced the beauty and awe of white water rafting, kayaking or even just climbing a peak, Mr. Owen's concerto is the next best thing to being transported there. With River Runs Mr. Owen has proven himself to be a compositional force to be reckoned with.