I really have to object with the way Chuck Todd is characterizing the underlying public pressure that's being brought to bear on President Obama and the White House to investigate and potentially prosecute the authors and the agents of the previous administration's torture regime.

The whole thing is knit up in political process tropes and infused with the pointless melodrama of the day, when a serious and substantive look at this issue is called for.

MITCHELL: They clearly are responding to the letter from Diane Feinstein...and the whole question of whether - in the liberal blogosphere whether they have been too quick to shut down any prosecutions.

TODD: There does seem to be a little bit of a reaction to how this was received on the left. And the president, when he went on in those comments, Andrea, to suggest that he'd be open to some sort of special commission that was bipartisan, you know, he said, on one hand said he's worried about the process getting politicized, and frankly this feels like a political food fight now. Vice President Cheney on one side, President Obama on the other. The hard left, the hard right, fighting over this in the blogosphere. When he talks about - he fears the politicization - that may be too late, so the compromise might be, and the president basically comes out and endorses it in that photo op, questioning that he got there, which is a special commission to look into this but it opens up all sorts of doors on when legal opinions matter and all that. That is just -- this is some touchy situation, issues having to do with legal opinions, the constitution, it's a real tightrope. And the political pressure on both sides is intense.

In the first place, Todd and his fellows need to move off of this Dick Cheney versus Barack Obama storyline. The two men are not, as Todd depicts, on opposite "sides." One is the duly elected President of the United States. The other is a retired man who holds no political power and who plays no role in policy making. The two men are not equals, any more than they were a year ago this time when Cheney was Vice President and Obama was the junior Senator from Illinois.

But more to the point, to suggest that public support for torture prosecutions is a struggle the "hard left" or the blogosphere is to miss the point entirely. There is strong, active, mainstream support for prosecutions. Period. 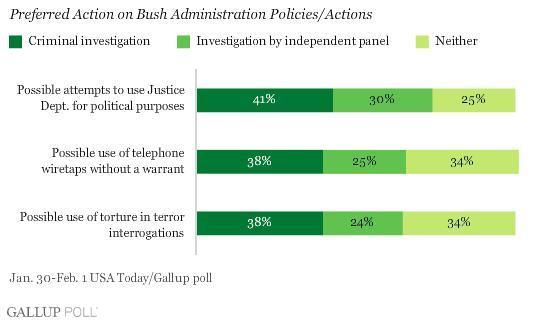 As you can see, the last time Gallup polled this issue, a plurality of respondents specifically favor a criminal investigation into the possible use of torture in terror investigations. A substantial majority want an investigation of some kind. Of course, Gallup concludes, "No Mandate for Criminal Probes of Bush Administration," but I'd point out that this poll was taken prior to the release of the torture memos. Regardless, to call the desire to investigate the use of torture an obsession of the "hard left" is just not true.

Viewing these responses by party affiliation bears this out, as well. That two-in-ten Republicans favor a criminal probe is nothing at which to scoff. I'd daresay it's significant that only 54% of Republicans want to simply walk away from the issue is significant as well. That's no slam dunk support for letting sleeping dogs lie.

I gather that the invocation of the "blogosphere" here is meant as a further means of belittling this issue, but Todd should check himself. Those poll numbers indicate that the blogosphere is but a small part of the broad support for investigations. Furthermore, those bloggers are doing the work on the issue that the traditional press can't seem to be bothered to do. Check out this New York Times article, published over the weekend, that documents the waterboarding of Khalid Sheikh Mohammed and Abu Zubaydah. All of the enterprise reporting for the article was done by blogger Marcy Wheeler, of Emptywheel. Good thing, too! It's not like the Times, in possession of the same memos, noticed the story.

You know what is, chiefly, an obsession unique to bloggers? The campaign to install Chuck Todd as the host of Meet The Press! This can easily be corrected.