Marrying art and science, and creating more real world interdisciplinary curricula is on most educators minds these days if they can just shuffle off the "No Child Left Behind" legislative mandates, and tackle the new "Common Core" in earnest.

In the process, more educators and others are recognizing the power of the arts as vital ingredients that give our young folks the thinking skills so in demand by the creative economy rapidly unfolding. Yes, a lot seems to be happening to put the arts back into the schools where they must be for us to reinvent education.

Just some of the exciting things to mention:

The President's Committee on the Arts and Humanities launched the 'Turnaround' program with art integrated curricula to help low performing schools and published an 18 month review of best practices on education emphasizing the critical role of the arts, California completed a 2 year study and set up a new organization called CREATE CA, (a statewide coalition including the Superintendents, the California Alliance for Arts Education, the California Department of Education, the California Arts Council, the California State PTA and other organizations and individuals.) which drafted a 'Blueprint for Creative Schools' in the belief that 'the arts embody creativity and, as such, are taking a central role in many national studies.'

But few school districts have made the commitment that California's Chula Vista Unified has to the arts, and the importance of arts integration-teaching everything through the arts-in all disciplines in their schools representing over 30,000 students. 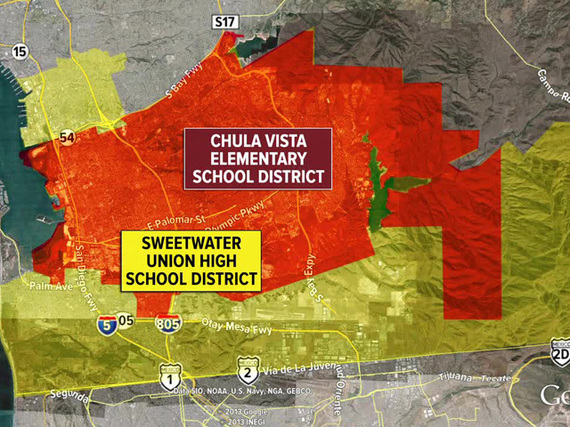 Recently the district announced $15 million for the arts over three years, at $5 million a year. After that, according to a KPBS.TV report, "district officials hope to implement a long-term plan that will permanently restore arts instruction in the schools," and collaboration with all teachers in the schools.

Clearly, the District was thinking about the importance of art and music 5 years ago when they entered into a program with the San Diego Youth Symphony to start an after-school program in 2010. VHI and the La Jolla Playhouse became partners and the conversations in the district about a more permanent place for arts education intensified. Dalouge Smith, the youth symphony's CEO, described the "rapid increase in arts as a cold turkey change."

Superintendent Francisco Escobedo, Ed.D, is on record fully and proudly supporting the changes and has said:

The Program has attracted the attention of arts enthusiasts nationally as a model for restoration of the arts in public schools... As part of our initiative to infuse 21st Century skills into our learning outcomes, the arts are a perfect medium to enhance collaboration, creativity and critical-thinking skills throughout our system.