A few months ago I wrote about the legendary chupacabra, a cryptozooligical creature who was first discovered in Puerto Rico before moving north and allegedly crossing into the United States in Arizona. Sightings in the southwest have been popular, although most turn out to be mangy coyotes. Now the media has been covering chupacabra sightings in Minnesota and Texas, and just this week, employees at a hospital center in a suburb of Washington D.C. believe they caught one.

"It's a kangaroo, dog, rat mixed," X-ray technician Joe Livermore told NBC Washington. "It's got a rat tail and a head like a deer. I don't know what it is." Employees at the Prince George's Hospital Center, in a Washington D.C. suburb, had apparently spotted the animal while out on smoke breaks. Unable to determine what the animal was, they nicknamed it Prince Chupa, and decided to capture it and take photos. They lured it into a cage using leftover Chinese food, got their pictures and released the animal. The NBC story stated that after sending their pictures out on the Internet there still had not been a confirmation as to what type of animal it was, although yesterday Discovery News stated that Prince Chupa has been "tentatively identified as a fox with mange."

The witnesses say Prince Chupa is shy and not aggressive, unlike the chupacabra's reputation as being a cold-hearted livestock killer that sucks the blood of its victim, leaving the carcass in plain sight, frightening skittish ranchers and children. In fact, early sighting reports of the blood sucker were of a winged two legged creature. Eventually the legend morphed into a four legged animal with spikes on its back. However, here in America, the creatures that have been found, believed to be chupacabra, are hairless four legged dog looking animals, not too unlike Prince Chupa.

This later description is similar to an animal that was run over by a car in Minnesota recently. It too was labeled a chupacabra, but turned out to be a badger. In July another alleged chupacabra incident took place in Texas when an eager teenager shot a strange looking animal, hoping to bag a mythical creature. The DNA tests on that animal have not been announced yet, but to me it looks like it may be a mangy coyote.

A few months back I took a picture of a mangy coyote outside of Phoenix, Arizona. It looks an awful lot like the chupacabras being run over, shot at, and otherwise harassed in the U.S. as of late. I have created a slideshow with my coyote picture and videos regarding the chupacabra incidents I have referred to in this story so you can compare them and decide for yourself.

The question is why are there so many chupacabra incidents lately? Are there more mangy coyotes around than usual and they are being labeled chupacabra? It may be just that it is a fun legend that has finally gotten popular enough to become part of our common vernacular. So now when we find a dead little four legged animal that we can't identify we just kinda scratch our heads and assume it must be one of them chupacabra. 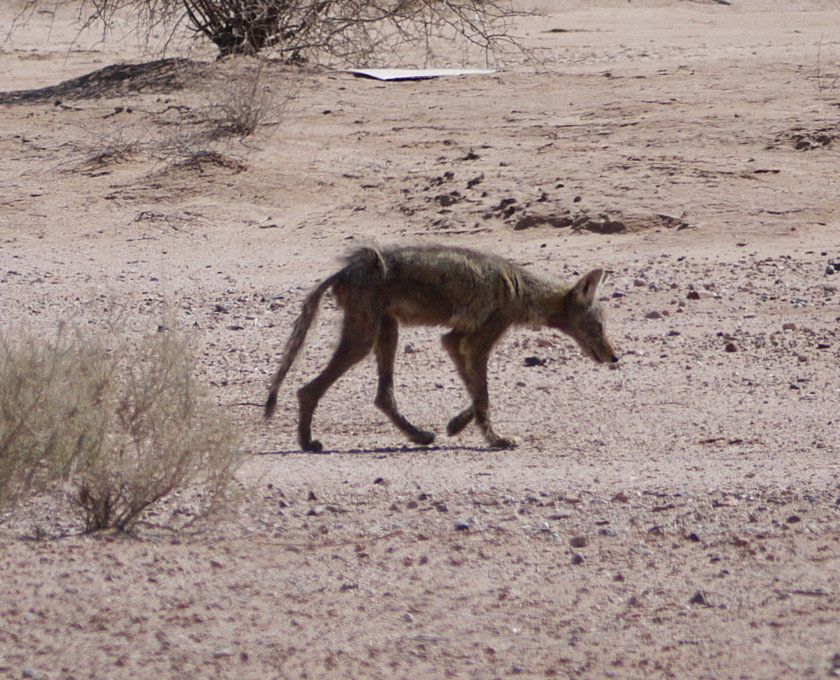 1 / 4
Mangy Coyote in Arizona
A mangy coyote seen in the Arizona desert outside of Phoenix. Credit: Alejandro Rojas