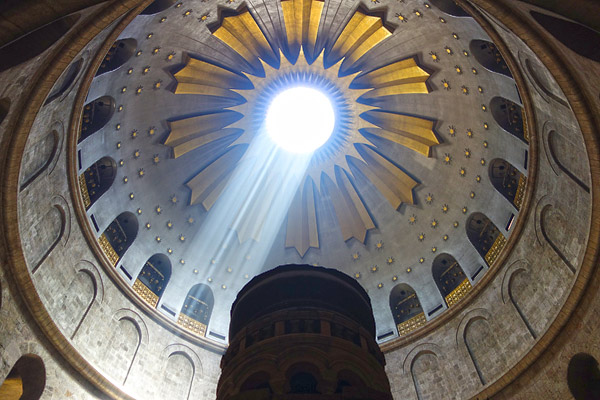 The religious scene in Jerusalem is complicated even for tourists. Before planning our day, my guide asked me my religion. Local guides know that, among Christians interested in seeing Jesus' tomb, most Protestants prefer the tomb in the Garden Tomb while Catholics like the tomb in the Church of the Holy Sepulcher. While I'm Lutheran, this is one case where I definitely go with the Catholics. 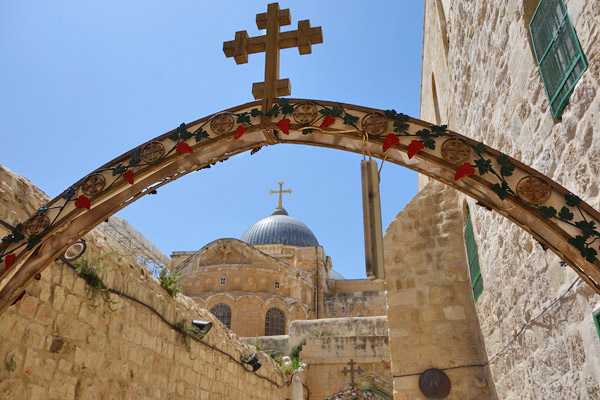 For many Christians, the Church of the Holy Sepulcher, built upon on the place where Jesus was crucified and resurrected, is the holiest of churches and the highlight of their pilgrimage to Jerusalem.

The Church of the Holy Sepulcher is built upon the summit of Golgotha, where Jesus was crucified. Because it's holy for all kinds of Christians, who see things differently and don't communicate very well, it's a cluttered religious hodgepodge of various zones -- each controlled by a different sect. There are chapels for Greek Orthodox, Franciscans, Coptic Christians, Armenians and so on -- each run by a different community or sect. To make any decision about the church in general, they need to agree unanimously. That's why nothing much gets done here in the holiest church in Christendom...and it feels that way. 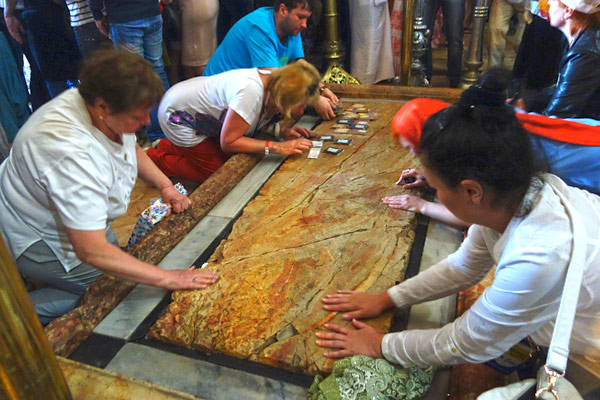 The slab believed to mark the spot where the dead body of the crucified Christ was given to Mary is busy with devout pilgrims.

Of the Stations of the Cross, most lie along the Via Dolorosa. But the last five are actually in the Church of the Holy Sepulcher. Number 10 is where Jesus was undressed, and Number 11 marks where he was nailed to the cross. Number 12 is where he was crucified. Number 13 is where his body was given to Mary. And finally, number 14 marks his tomb. Each is busy with pilgrims.

Christians from around the world come to Jerusalem to follow the Via Dolorosa ("Way of Grief"), and to follow the route Jesus walked when he carried his cross to Golgotha to be crucified. Today most of the Via Dolorosa feels like a touristy shopping mall through Muslim and Christian quarters of the old city, but the presence of devout pilgrims like this Eastern European congregation gives it a sacred feeling nevertheless.