REPRINTED WITH PERMISSION THE NATIONAL INTEREST 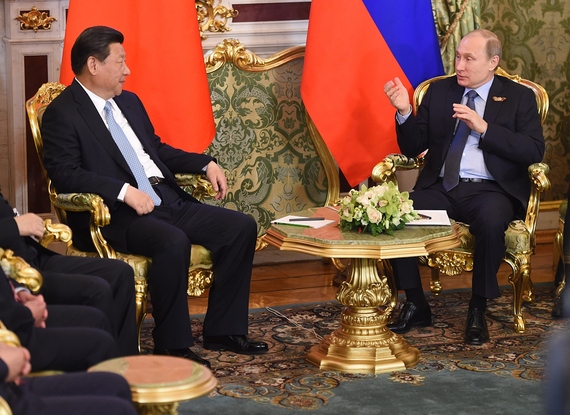 What happens when you marry the world's largest land mass, richest resource base, and best air defense systems with the world's most populous country, de facto factory floor, and largest military force? The world may be about to find out the hardest of ways as China and Russia move ever closer to an axis of revanchist authoritarianism.

To assess the probability of such a Chussian wedding, consider this second question: Which characterization best captures China's view of Russian President Vladimir Putin?

In fact, the hero worship of "Putin the Great" on the streets of Beijing is fully consistent with a Chinese narrative in which the West, led by an imperialist America, has systematically carved up the world at the expense of victim nations like Russia and China. In this narrative, Russia lost territory that once comprised the Soviet Union only because Mikhail Gorbachev was "tricked" by Ronald Reagan. Now, it is only right and just that Putin use Russia's growing military might to reclaim its lost territories.

Of course, the revanchist beauty of this narrative is that it gives China permission to engage in precisely the same kind of coercive expansionism as Russia. The clear analogy: Because China was carved up during its own Century of Humiliation (including and ironically by Czarist Russia), it is also just that, as China grows its military might, it now exercise its historical right to recover the lands that were unfairly taken from it.

Unfortunately for its neighbors, China's revanchist list is as long Putin's inventory of former Soviet Socialist Republics that have strayed from the Russian fold. At the top of this list is the island democracy of Taiwan - along with Japan's Senkaku Islands in the East China Sea.

There is also Beijing's "nine dash line" grab for more than 80% of the South China Sea - including all of the Paracel and Spratly Islands. China even lays historical claim to the Indian state of Arunachal Pradesh, which Beijing refers to on maps as "Southern Tibet."

WATCH THIS VIDEO FOR MORE DETAILS!

Is Geography Destiny?
In thinking about the far-ranging implications of a new Chussian military axis, it is well worth remembering this: While Mother Russia has been stripped of former Socialist Republics in the Baltics, the Caucasus, Central Asia, and the Western Republics and no longer holds sway over client states like Czechoslovakia, East Germany, Hungary, and Poland, Russia nonetheless remains by far the largest country on the planet. In fact, the Russia landmass is almost double that of either China or the United States. 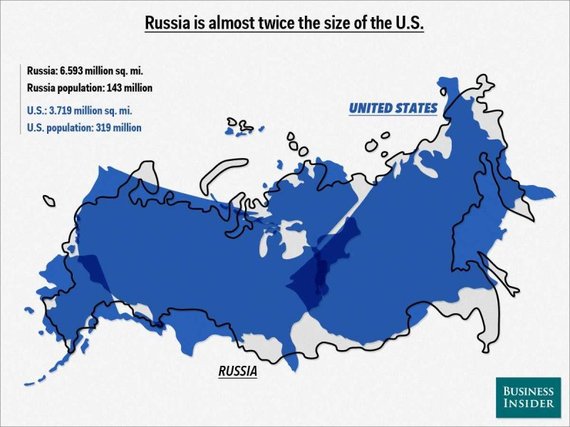 Within its ample borders, Russia is also blessed with the world's largest oil reserves, the second largest coal reserves, 40% of the world's natural gas, one fifth of its timber, and an abundance of other minerals and metals such as aluminum, copper, lead, platinum, and tin. On this resource basis alone, it would seem to make sense for the "energy superpower" Russia to throw its lot in with the world's undisputed factory floor of China.

Such a convenient marriage of resources and manufacturing capacity is, however, hardly the only reason for a possible China-Russia alliance. On the political front, Russia shares with China a common communist past as well as a current authoritarian form of government.

On the military front, Russia is also China's leading supplier of highly advanced weapons systems; and scoff all you want about how Russia can't make a decent loaf of bread. It still makes damn good weapons.

These include, for example, a new "Project 636.3" Kilo classhttp://russia-insider.com/en/vietnam-war-critical-role-russian-weapons/6357 conventional diesel-electric sub Russia claims is the "quietest in the world" and NATO has dubbed the "black hole." China is buying Russian subs by the boatload to defend against (or attack!) everything from US carriers and Japanese destroyers to Vietnamese subs.

Russia's weapons prowess also encompasses its world-class air defense systems. Remember: It was a Soviet SA-2 surface-to-air missile that shot down the "unshootable" American U-2 spy plane in 1960 while Soviet SAMs also helped take down over 2000 American planes from the skies of North Vietnam - with Chinese "technicians" often pulling the triggers.

Remember, too, that it was a Soviet SA-3 surface-to-air missile that shot down a Lockheed F-117A stealth fighter from the Serbian skies in 1999. Chinese agents recovered the wreckage, and it was then used to develop China's own Chengdu J-20 stealth fighter.

Of course, the most chilling dimension of what looks to be an impending Chussian wedding is one that sharply escalates Josef Stalin's adage that "quantity has a quality of its own." To wit: any long term marriage between Russian weapons and China's world's largest army offers the prospect of an authoritarian alliance that may have both "quantity" and "quality" on its dark side. It's a "war by algebra" advantage that Clausewitz could only dream of - while giving a budget-sequestered Pentagon a surfeit of nightmares.

_________________
Peter Navarro is a professor at the University of California-Irvine. He is the author of Crouching Tiger: What China's Militarism Means for the World (Prometheus Books) and director of the companion Crouching Tiger documentary film series. For more information and a free copy of the film, visit www.crouchingtiger.net.