An important aspect of Venezuelan President Hugo Chávez's political survival over these past ten years has been a carefully managed ignorance amongst the international community. While there may be some awareness of attacks on journalists, blacklists, political prisoners, and the occasional wielding of the authoritarian sledgehammer, Chávez and co. are counting on the majority of us to be just lazy enough not to look beyond the myths of democracy, social justice, and the general idea we prefer to hold of Venezuela as a socialist utopia.

I don't doubt that despite the unprecedented steps toward authoritarianism taken by the Chávez regime in recent months (including the shutting down of 32 radio stations, an indoctrinating education bill, and removal of political powers from democratically elected opponents), that I will continue to hear happy stories about Venezuela's peaceful and prosperous social democracy from Washington to Brasilia to Paris. It's all too often cited as an excuse why no one should act. After all, Caracas spends hundreds of millions on campaigns to make sure this happens.

One person who was decidedly not too lazy to take a closer look at the political ambiguities of Venezuela is Brian A. Nelson, a professor at Johns Hopkins University whose recent book The Silence and the Scorpion is a must read for anyone seeking to get an unbiased and comprehensive account of the two most controversial days of the Chávez presidency.Nelson's book provides an hour-by-hour breakdown of the events beginning April 11th, 2002 told through many different voices of witnesses and participants from both the pro-Chávez and opposition camps, as the two massive marches clashed violently on the avenues leading up to the presidential palace.

The resulting deaths from the violent clashes, captured in prolific footage played on a repeating loop by the private media, led to public outrage and the temporary ouster of Chávez from the presidency by an improvised, ad-hoc coalition of military officers and a few opposition members. Completely unprepared for their sudden seizure of power, a few individuals went about committing a series of hasty and terrible mistakes which resulted in the restoration of Chávez by the very same officers which had ousted him. 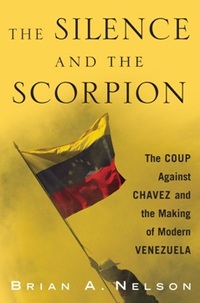 From here the myth making of the coup began, bringing us years of contradictory and confusing accounts, court cases, documentary films, and propagandistic campaign drives. Nelson patiently wades through all the contradictions to get the most reliable accounts from those who have the least to gain from falsehood, bringing us a rare picture of what led to that terrible afternoon on Baralt Avenue.

But why should an event that happened seven years ago continue to be so important today? As Nelson explained to me in an extensive interview via email (the full transcript of which is posted here on my blog), how we understand the 2002 coup is seen as the ultimate proof or disproof of the regime's credibility.

Nelson's status as an outsider is exceptionally important in telling this story, as is his willingness to give voice to both sides (very few journalists in Venezuela are able to avoid being polarized into one camp or the other, putting a sharp end to any diverse sources). As he explains in his prologue, he arrived in Venezuela to begin work on this book as a devout Chavista in 2002. His conclusions, however, led to some significant disagreements with the government's portrayal of the events.

His research did not show an equal level of violence among the opposition and Chavista marchers, finding that most of the gunshot victims arriving to the hospital first came from the opposition. The chaos on April 11th literally came down to the hours, beginning at 2:30 p.m. with the pro-Chávez gunmen shooting southward at unarmed opposition marchers, followed by the Metropolitan Police moving up the street to form a barrier between the two marches, with the gunfight culminating around 4:30 p.m. as the police returned fire on the pro-Chávez gunmen.

One of the main conclusions of The Silence and the Scorpion contradicts the government's long standing claim that it was the victim of a well planned conspiracy fomented and encouraged by U.S. backing: "...The evidence suggests that it was a complex and confusing event that was influenced by dozens of self-serving actors. This was not a coup in the classic sense."

This is not to say that Nelson's treatment of the opposition was compromising. The behavior of the media, who maintained a news blackout on the 12th, and then participated in actual meetings of the interim government, is laid bare in critical light by observers inside Miraflores. The draconian measures taken so hastily by the misguided Fedecamaras President Pedro Carmona -- which included the dissolution of the National Assembly, Supreme Court, and Constitution all in one fell swoop -- is harshly appraised: "[Carmona] couldn't help but show a very inappropriate smirk."

Nelson treats the April 11th events with hard-earned restraint, fairness, and an absence of the kind of confrontation and anger that has come to characterize the political debate in Venezuela. We are reminded that the bullets on the Puente Llaguno did not care whether or not you were Chavista or an opponent, and certainly less if you are rich or poor. We hear the story of Mohamad "Mike" Merhi, and the loss of his son on the opposition side. We see the shooting begin through the eyes of Douglas Romero, a grade school teacher, marathon athlete and Chávez supporter, who would never run again after taking a bullet through the thigh. Behind all the politics, too often the human cost is forgotten.

Of particular note is how many protagonists in Nelson's book would later become political prisoners of Chávez, including several key officers who rescued and reinstated him. There is General Raúl Baduel, one of the President's oldest allies, who would lead the rescue mission to bring him back, and who is now a prisoner in Ramo Verde on invented charges. There was General Francisco Uson, Chávez's finance minister, who fed him vital information about the disorganization of his ousters, who would later serve a jail term for giving a simple TV interview. There was Otto Gebauer, a mid-ranking helicopter pilot who is still in jail today and known as one of the few people who witnessed Chávez crying.

Lastly, there was the union leader Carlos Ortega, one of the key protagonists of the opposition march, but who quickly broke ranks and rejected the Carmona government, which he felt was a betrayal of the opposition's objectives to build a new Venezuela. Now living in exile in Peru after escaping prison, Ortega served years on invented charges. Many of Ortega's key supporters have also been jailed on trumped up charges, such as my client Eligio Cedeño, for having financially supported an enemy of the state.

All of these people have served jail time stemming in some sense from the April 11th events, yet no investigation has been made into the pro-government gunmen who actually committed murder, while all evidence from the scene was collected and destroyed. As the government has become so dependent on reinforcing this false myth of the April 11th events, the justice system has been transformed in order to carry out show trials of the alleged aggressors, while the real victims remain deprived of justice.

In my interview with Nelson, I asked him if his research on the event had caused him to switch sides, to change from a Chávez supporter to a Chávez critic. His answer was careful and measured. While he agreed with the social aims of the Bolivarian Revolution and the need to provide for the impoverished of Venezuela, he couldn't justify the rationale of the ends justifying the means -- especially in light of the Venezuelan government's use of violence (and the threat of violence) as a political tool.

"In conclusion, I would still be sympathetic to Hugo Chávez if he wereindeed the Social Democrat he initially said he was," Nelson replied in the interview, "but he is not."

This weekend, as I watched the news of Coronel Antonio Benevides Torres violently breaking up the peaceful protest marches over the education bill with truncheons and tear gas, I could only wish that more outside observers could make the difficult decision to believe that ends do not justify such means. Pretty soon, it is not going to matter what any of us think of a president willing to treat his people like this.