WASHINGTON -- For several months before the Senate Intelligence Committee released a summary of its controversial report on the CIA's torture program on Tuesday, Senate Democrats were locked in a well-publicized battle with the executive branch over whether to redact the aliases used for CIA officials used in the document.

But even as the White House and the CIA engaged in this dispute with the Senate, a separate, and potentially more serious, set of revelations was at stake.

According to several U.S. officials involved with the negotiations, the intelligence community has long been concerned that the Senate document would enable readers to identify the many countries that aided the CIA's controversial torture program between 2002 and roughly 2006. These countries made the CIA program possible in two ways: by enabling rendition, which involved transferring U.S. detainees abroad without due legal process, and by providing facilities far beyond the reach of U.S. law where those detainees were subjected to torture.

The officials all told The Huffington Post in recent weeks that they were nervous the names of those countries might be included in the declassified summary of the Senate report.

The names of the countries ultimately did not appear in the summary. This represents a last-minute victory for the White House and the CIA, since Senate staff was pushing to redact as little as possible from its document.

The various sites in foreign countries are now only identified in the report by a color code, with each detention facility corresponding to a color, such as "Detention Site Black." 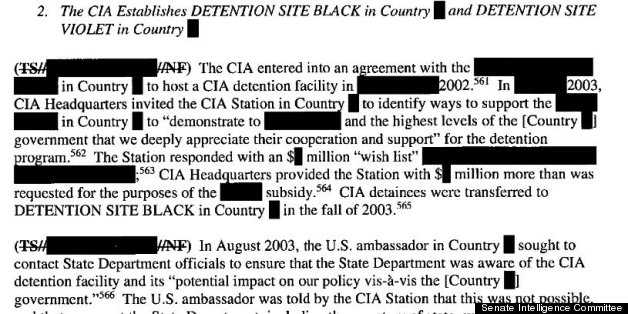 But immediately after the document was released, journalists began to crack the code by cross-referencing details in the Senate study with previous reports about the CIA's activities in different countries.

Readers of the report can also learn how the agency managed its relationship with foreign governments, offering monetary payments for their silence and undermining more public U.S. diplomatic efforts by explicitly telling their foreign contacts not to talk to U.S. ambassadors about the torture program. 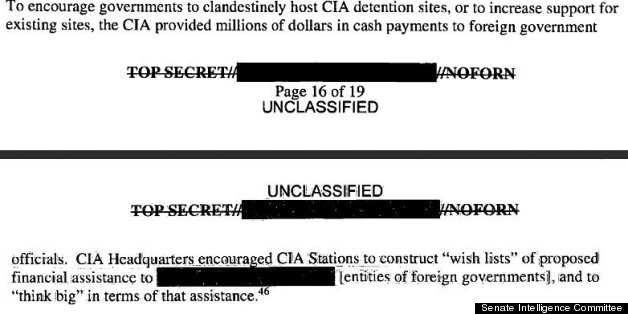 The officials interviewed by HuffPost believe the Senate report takes a major risk by enabling the identification of these countries. They pointed out that the countries participated with the understanding that their involvement would remain secret. And while many of the countries have already been identified publicly by investigations in Europe, reports from outside analysts and stories in the press, the U.S. government's tacit exposure of their involvement is still likely to have a dramatic impact abroad.

There's precedent for this: Defenders of the executive branch's position can point to the fact that even though much of the information exposed by Wikileaks about Middle East regimes' collusion with the U.S. was not a surprise, seeing the evidence in official U.S. cables helped spark outrage throughout the region and fuel the Arab Spring protests. In that sense, the intelligence community, by managing to obscure the names of the countries even though they are easily identifiable, scored a significant victory in its dispute with the Senate.

Secretary of State John Kerry indicated before the Senate document was released that he is worried about the global outrage that could follow the report. For Kerry and other diplomats, the evidence revealed in the Senate document could prove critically embarrassing for friendly governments, vindicate the narrative that the U.S.'s human rights record is no better than those of its foes, and show that the U.S. is willing to throw partner nations under the bus.

On Friday, Kerry called Sen. Dianne Feinstein (D-Calif.), the Senate Intelligence Committee chair, to request that she delay the release of the report in light of its potential global ramifications. Feinstein did not honor the request, likely out of concern that, were the report's release to be delayed any further, the Senate's new Republican majority would bury the investigation once they took control of the intelligence panel.

Transparency advocates who defend the report believe that the administration's critiques are flawed. If the report makes countries less willing to cooperate on such projects in the future, they argue, that's a benefit, not a cost, because the program was illegal and immoral. The report may actually boost the pressure on foreign governments to make amends, even as the prospects for accountability seem low in the U.S. Four countries -- Canada, Sweden, Australia and the United Kingdom -- have previously given compensation to victims of the program, and Canada has also issued an apology to a victim.

Here are the countries involved. 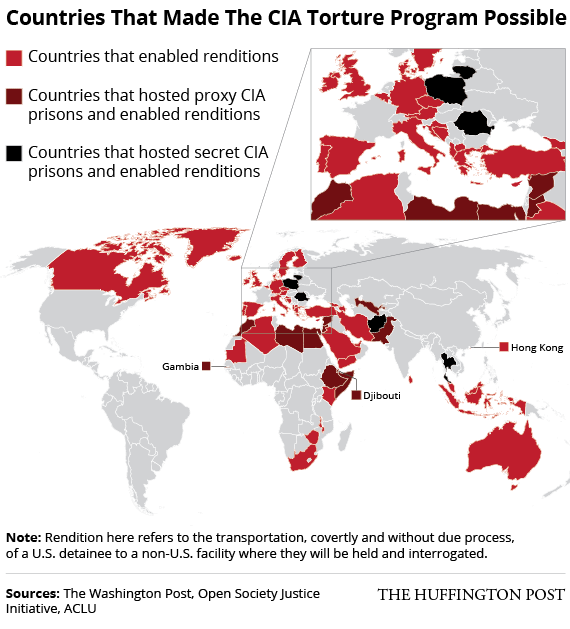 The Washington Post decoded the report to reveal countries that were home to secret CIA-controlled prisons.

Note: According to a 2013 report by the Open Society Justice Initiative, U.S. facilities in Bosnia-Herzegovina were used to "process" detainees, but it is unclear whether the U.S. agency running that operation was the CIA or the Department of Defense.

A number of other foreign partners (including two governments that the U.S. has since disavowed, those of Libya and Syria) permitted the CIA to conduct enhanced interrogation in their own facilities, through what are called proxy CIA prisons. Here's a list, drawn from reports by the ACLU and the Open Society Justice Initiative:

This list features countries that proved amenable to at least some CIA measures that were only questionably legal. It is a curious mix of prominent Western nations and nations with which the U.S. has long has difficulties. The governments' assistance ranged from passing along information about suspects, including those countries' own citizens, to serving as a transit point for flights to countries where enhanced interrogation was taking place.