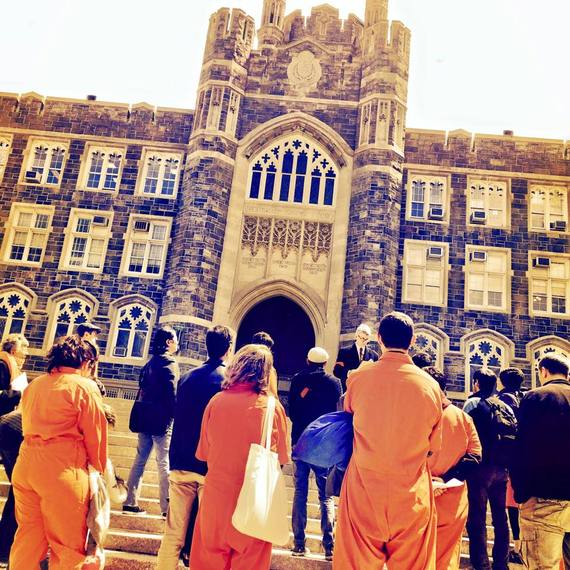 In May, just before students and faculty left school for the summer -- we are back now -- Fordham University President Joseph M. McShane, S.J., announced his much anticipated response to the school's human rights advocates: the Board of Trustees had voted not to revoke CIA Director John Brennan's honorary degree. According to Bob Howe, McShane's press secretary, the vote was unanimous.

After the release of the Senate Intelligence Committee's report on CIA torture in December 2014, seven Fordham professors formed Fordham Against Torture (FAT), an ad-hoc committee that petitioned McShane with over 730 signatures to revoke Brennan's honorary degree. It was awarded to Brennan in 2012 when he delivered Fordham's commencement address, despite protests and a petition by students and faculty.

In his email to FAT, McShane wrote, "While the Board and I condemn torture and extrajudicial imprisonment in the strongest possible terms, as a public servant, Mr. Brennan does not set the policies that have led us to this place, but rather is responsible to the elected officials, including the President, who have. The President, his predecessor, and Congress are legally responsible for the creation of the policies you -- indeed all of us -- find so shocking."

McShane's response embodied classic institutional cover-up for wrongdoing (one often employed by the Obama administration): condemn the bad thing (We oppose torture) and offer a lukewarm excuse for not correcting it (Mr. Brennan isn't responsible). It's an easy way out, feeding the establishment media sound bites to make the administration seem morally righteous and free itself from responsibility.

Claiming that Brennan isn't responsible for the reprehensible counterterrorism policies of the Bush and Obama administrations is like claiming that the FBI didn't spy on civil rights activists. Brennan is widely known for developing "kill lists" of people targeted for assassination by the U.S. government and the controversial practice of "signature strikes," drone strikes on unidentified people targeted for their behavioral patterns or for carrying a cell phone SIM card associated with an alleged "terrorist." In a letter to the Ram, one of Fordham's undergraduate newspapers, ex-CIA officer Ray McGovern -- like Brennan, a Fordham graduate -- wrote, "Brennan is now the administration's strongest advocate of extrajudicial killing of U.S. citizens by drones." That apparently doesn't give McShane pause about honoring Brennan.

But even if McShane's basis for not revoking Brennan's honorary degree -- that Brennan is not responsible for the creation of "shocking" policies -- were true, his degree should still be revoked on the grounds that he didn't, in protest of war crimes, refuse to carry out his superior's orders. David Myers, history professor at Fordham, offered another reason for revocation on the basis that Brennan simply followed orders: "If you simply look at the last 40 years of this country's history, subordinates or officers in the presidential administration have been held criminally responsible even though the president was directing them, even though they were just following orders."

After citing the 1989 massacre of six Jesuits in El Salvador in which the CIA was complicit, McShane wrote, "Do not for a minute believe that honoring John Brennan is the same as honoring the institution for which he works, nor its checkered history." The phrase "the institution for which he works" makes Brennan sound like some low-level CIA officer, furthering the narrative that Mr. Brennan isn't responsible. The obvious truth is that John Brennan, arguably the architect of the modern-day CIA, runs the CIA and has directly contributed to its "checkered history." So while honoring him in 2012 doesn't honor a massacre in 1989 in which he probably played no role, it certainly does honor the human rights violations committed by the CIA since he began to hold high-level positions (in 1999, when Brennan was appointed chief of staff for then-head of CIA George Tenet). It is thus telling that McShane didn't condemn any recent specific examples of human rights violations by the CIA, such as the more than 400 civilians killed by its drone program in Pakistan, because then he would have to admit to honoring a war criminal.

My initial reaction to McShane's response was one of frustration and embarrassment for attending a university that honors a war criminal. Upon further reflection, I've realized that I have no reason to be embarrassed. What the Board of Trustees decides does not define Fordham. We, the students and faculty, define Fordham. And I couldn't be any more proud to work with a community so dedicated to human rights and social justice.

Also, while you're at it, get rid of Bill Cosby's honorary degree, too.