Cigarettes used to be everywhere in American society. Fifty years ago, 42.4 percent of U.S. adults smoked. Since then, that figure has declined by more than half, reaching a record low 17.8 percent in 2014. What’s more, the rate is still dropping.

How did we reach the point where clouds of smoke a la "Mad Men" look so anachronistic? Several factors combined to yield one of the most successful and perhaps under-appreciated public health victories of our lifetimes. Here are five reasons for the dramatic decline of smoking in American life.

The Surgeon General's Office estimates that almost nine out of 10 smokers began smoking before age 18, while virtually every smoker -- a full 99 percent -- started by age 26. Accordingly, a lot of effort has been directed at discouraging young people from picking up that first cigarette.

The primary focus has been the public schools. Results from Drug Abuse Resistance Education, the widely used program typically aimed at fifth- or sixth-graders, show that DARE graduates are up to five times less likely to begin smoking compared to their non-DARE counterparts. The program has been implemented in 75 percent of the country's school districts since its 1983 inception. 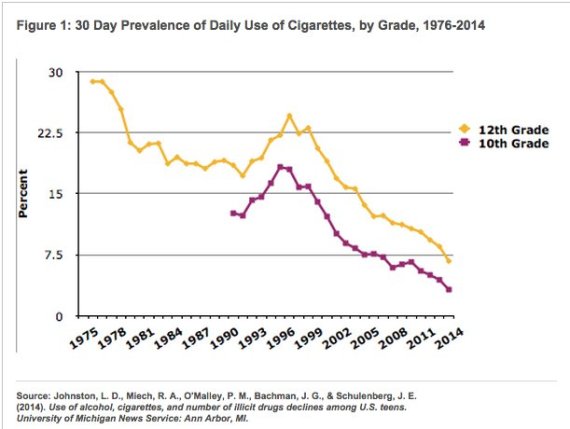 Forty-six states went to court and forced the major tobacco companies to largely cease advertising and marketing aimed at children under the Tobacco Master Settlement Agreement of the late 1990s. The best known example of youth marketing had been Joe Camel. After R.J. Reynolds introduced the cartoon mascot into the U.S. in 1988, Camel's share of illegal sales to underage buyers increased from less than 1 percent to nearly 33 percent, until the company was pressured to stop its campaign in 1997. Under the Tobacco Control Act of 2009, the Food and Drug Administration banned cigarettes that tasted like candy or fruit, flavors added primarily to appeal to children and teenagers.

Most states have set a minimum age of 18 for buying cigarettes. But last year, the minimum age in New York City was raised to 21 -- a first-in-the-country move -- and this month, a report from the independent advisory Institute of Medicine essentially said a similar hike nationwide would be good policy. Other municipalities have already followed NYC's lead, and several states including Colorado and Utah are considering similar legislation.

2. Anti-smoking laws passed at all levels.

The Pro-Children Act of 1994 banned smoking in public schools across the country. While some individual schools had already acted on their own, this law helped end the practice of setting aside areas for high school students to smoke, which was fairly common before and virtually unheard of today.

Minnesota became the first state to pass an indoor clean air act restricting smoking in public places in 1975, and 27 other states have since followed. Many places where smoking was once common, from restaurants and sporting arenas to offices and airplanes (that's right, airplanes), now disallow the practice. The American Nonsmokers' Rights Foundation calculated that 4,232 states, commonwealths, territories and municipalities limit where people can smoke. These restrictions have clearly discouraged smoking -- for example, one study found a 30 percent drop in smoking among people whose workplaces were made smoke-free. 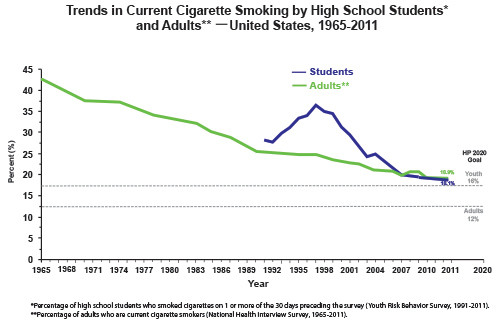 The FDA, empowered by the Tobacco Control Act the previous year, introduced a number of new anti-smoking rules in 2010. In addition to banning flavored cigarettes, these regulations required stricter warning labels and directed tobacco companies to test for and report on harmful components in their products. The proposed rule that received the most attention, requiring cigarette boxes to carry graphic visual depictions such as diseased lungs, has been stayed by a court order due to concerns that it would violate tobacco companies' First Amendment speech rights.

But the federal government still hasn't done nearly enough, according to Dr. Stanton Glantz, director of the Center for Tobacco Control Research and Education at the University of California-San Francisco. He noted that federal efforts have usually been a lot weaker than those of states and municipalities on this issue and pointed to the FDA's report last year, which included the "lost pleasure" of smoking as a "cost" in a cost-benefit analysis of the proposed graphic warning labels.

"That kind of calculation makes it harder to pass," Glantz told The Huffington Post. "Decreased smoking is a benefit, not a cost!" 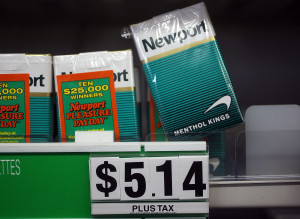 Smoking used to be an inexpensive habit, nowadays not so much. Including taxes, the average cost for a cigarette pack was $0.38 in 1970; by 2011, it had risen to $5.90. This increase was partially a result of higher production costs and inflation, but also due to factors such as the federal cigarette tax, which now stands at $1.01 per pack, up from just $0.39 as recently as 2008. (In 2013, President Barack Obama proposed hiking it further to $1.95, but the plan died in Congress.)

States have raised their taxes too, with more than 100 state tax increases since 2000 alone. Generally these efforts have received bipartisan support. Both Democrat-led and Republican-led states are trying to hike taxes again this year, including Alabama, Pennsylvania, California, Ohio, Kansas and Oklahoma.

“The increase in tobacco taxes has had an effect at the state and local level, going up over a dollar in the last decade or so. It's the one area where we’ve had the most recent success," Thomas Carr, director of national policy for the American Lung Association, told HuffPost. "That's even in states with Republican governors. Most taxes don’t poll well, obviously, but cigarette taxes start with at least 60 percent support in any state."

While results are mixed on whether raising prices diminishes smoking rates among those already addicted, the data indicate that high prices serve as a disincentive for those who might otherwise start.

Over decades the tobacco industry spent tens of millions of dollars funding pseudo-scientific research that downplayed cigarettes' harmful health consequences, as Naomi Oreskes and Erik M. Conway documented in their book Merchants of Doubt. For a long time, that "research" served to drown out the many studies proving the opposite.

"Millions of pages released during tobacco litigation [in the late 1990s] demonstrate these links," Oreskes and Conway wrote. "They show the crucial role that scientists played in sowing doubt about the links between smoking and health risks."

In 1998, the Master Settlement Agreement forced the dissolution of the Tobacco Institute, the trade group through which the industry had funded and promoted its pseudo-scientific viewpoints.

"Nowadays even the people who smoke almost always know that it's bad for them or say they want to quit," Glantz said. "That wasn't always the case. You go back a few decades, and smokers were often claiming it was good for them."

5. Movies and TV stopped making it seem so glamorous. 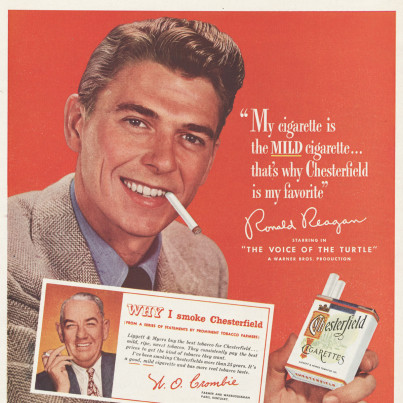 Media and popular culture can have a powerful influence on people's behavior, especially that of the young. A study led by Patrick E. Jamieson of the Annenberg Public Policy Center at the University of Pennsylvania suggested that smoking on TV had influenced real-life smoking levels. Among the 30 most-viewed primetime programs, there were nearly five instances of tobacco use per hour in 1961. By 2011, that number had plummeted to 0.29 instances per hour.

Commercials, which can take up more than one-third of screen time, were also once sales tools for the tobacco companies. TV and radio ads for cigarettes were banned in the U.S. in 1971. Such ads are still allowed in print and online media.

PG-13 films account for more than half of all movies released and are the primary MPAA rating category watched by adolescents. Cigarette use was featured in 80 percent of PG-13 films in 2002, but that figure had dropped to only 38 percent by 2013. Just this month, Disney announced that it would prohibit smoking in all its future films, a policy it clearly did not follow in the past:

Of course, culture isn't just what we watch but what we do and think. Simply put, cigarette smoking isn't considered quite as cool as it was in the days of the Fonz. A survey of tens of thousands of high school students last year found that fewer than one-third thought smoking cigarettes made someone "look cool."

Among the less obvious causes of the decline in smoking may be the generational effect. The fall for cigarettes really started in earnest during the 1970s, which means the teens who chose not to start smoking then are parents today. Children of smokers are statistically more likely to become smokers themselves, so fewer parents smoking means fewer children doing so as well.

Social norms do change. "The positions people like me were taking in 1980 are weaker than the positions taken by Philip Morris today!" said Glantz of the Center for Tobacco Control Research and Education.

"I mean, I remember the era when there was still smoking in rooms around people with oxygen tanks," said Carr of the American Lung Association.

While the smoking rate has declined, the problem still exists. Although the numbers have dropped dramatically over the last 50 years, some 273.6 billion cigarettes were sold in the U.S. in 2011, according to the Federal Trade Commission.

Smoking still causes around 443,000 deaths per year according to the National Institutes of Health, and smokers die on average 14 years earlier than nonsmokers.

If you or someone you know wants to quit, the American Heart Association provides a list of resources that can help.

CORRECTION: A previous version of this story stated incorrectly that past studies demonstrating the dangers of cigarette smoking were "smaller" in scope than the tobacco industry's contrary research. They were not.