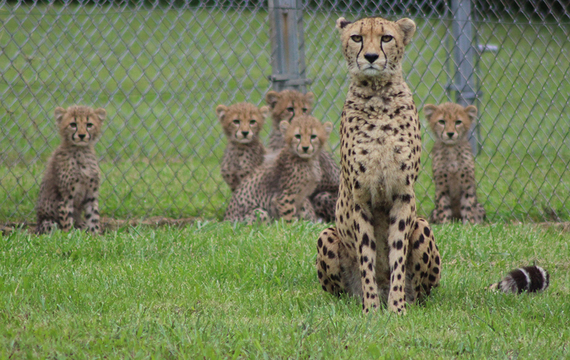 Six-year-old cheetah, Kathleen, has adopted the most genetically-valuable cheetah cub in the North American zoo population, born at Wildlife Safari in Oregon on May 15, and is raising her alongside the four cubs she gave birth to on May 10 at the Cincinnati Zoo & Botanical Garden's off-site cheetah breeding facility.

When the only litter mate of the cub born at Wildlife Safari died shortly after birth, staff at the Oregon breeding facility, knowing that cheetah moms do not raise single cubs, had to make a quick decision. The lone cub would have to be raised by hand or cross-fostered (a term used to describe the transfer of an animal from one dam to another). Because of the animal's unique genetic value, cross-fostering was the best option. 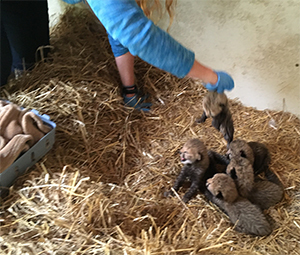 It was important to try to keep this cub in the breeding population" said Christina Gorsuch, Curator of Mammals at the Cincinnati Zoo. "Cheetahs raised by humans generally become ambassadors for their species, an important contribution, but do not breed. The best chance for future breeding success was to put the cub with another mom and litter mates."

Between the nine facilities in the cheetah Breeding Center Coalition (BCC), due dates frequently coincide. So, if there are single births, or litter mates die, there is usually a good chance that another facility will already have a litter or be expecting one. Cross-fostering should occur within two weeks of birth, so Kathleen was the perfect surrogate mom candidate for Sara Roy, the name given to the cub from Oregon.

The situation was ideal, but there was no guarantee that Kathleen would accept the cub. "Several things can go wrong when trying to introduce a cub to a litter. Cheetah moms can be very nervous," said Tom Tenhundfeld, head keeper at the breeding facility. "She might ignore the cub or remove it from the litter. She could move the whole litter. She could injure or kill the cub or not allow it to nurse."

Fortunately, none of those things happened to Sara Roy. The ten-day-old cub arrived at Cincinnati Zoo's breeding facility on May 20 and was placed with the other cubs while Tenhundfeld distracted Kathleen with food. "Before leaving her in the nest box, Christina rubbed bedding and the original cubs on her to transfer the scent. I let mom back outside as if nothing had just occurred. She patrolled around the nest enclosure for several minutes then went in to shelter, looked and sniffed around and lay down to allow the cubs to nurse. The cub went right towards belly and did some nursing as if she'd been there all along, mom didn't mind and didn't seem to notice she had an extra mouth to feed! It was awesome," said Tenhundfeld.

Physical exams earlier this week confirmed that all five cubs are in good health. They are boisterous, energetic and starting to eat meat. "You can't tell them apart by looking at them at this point, but each has had a transponder chip, about the size of a grain of rice, implanted for ID purposes," said Gorsuch. 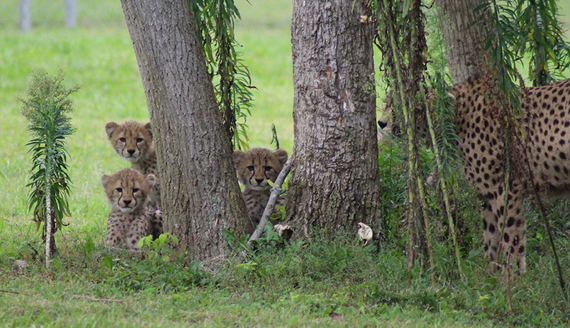 Earlier this year, a male cub from Wildlife Safari came to the Cincinnati Zoo under similar circumstances. At that time there were no nursing moms at the Zoo's breeding facility, but there was a litter of cubs being hand raised in the Zoo's nursery. The BCC determined that this was the best place for Donni, the name his Cincinnati keepers gave him, and he is now thriving as a Cat Ambassador Program rookie. 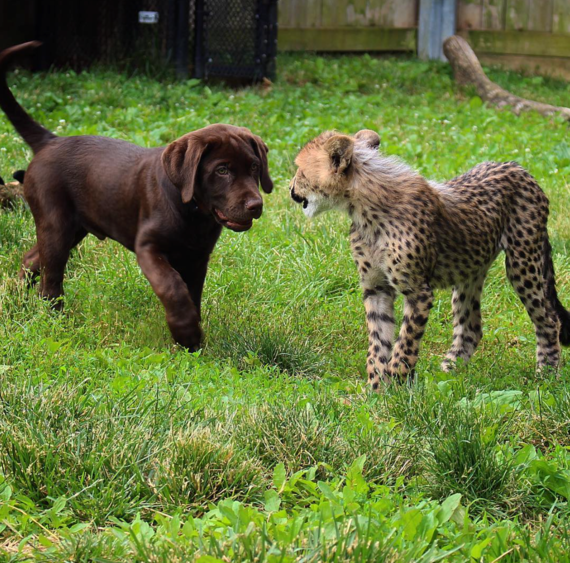 Donni with puppy companion Moose at the Cincinnati Zoo.

Since 1990 the Cincinnati Zoo's Angel Fund, named after our first cheetah ambassador, "Angel," has directly supported cheetah conservation in Africa. From South Africa and Namibia in the south, up through Kenya and Tanzania in East Africa, The Angel Fund has contributed more than $1 million in support for cheetahs in the wild.

The Cincinnati Zoo is one of nine institutions accredited by the Association of Zoos and Aquariums (AZA) that participate in the BCC. Working closely with the AZA's Cheetah Species Survival Plan (SSP), the BCC's goal is to create a sustainable cheetah population that will prevent extinction of the world's fastest land animal.