While not the official Mexican Independence Day, which falls on September 16, Cinco de Mayo might just be the quintessential celebration of freedom for Mexicans the world over.

After the 1846 war with the United States, Mexico went through a difficult economic period, which was further weighed down by a civil war that lasted from 1858 to 1861. To supplement a deflated economy, Mexico borrowed vast sums of money from England, Spain and France.

But before they could get to the capital, they were stopped at the state of Puebla. This is where, on May 5 of 1862, the comparatively small, outnumbered and out-armed Mexican army defeated the then super power that was France.

Mexico City subsequently fell to French rule less than a year later, but this hasn't spoiled the fun or the significance of that victory. The Mexican men who fought at Puebla defied the odds, and Cinco de Mayo celebrates their bravery and determination.

Usually the festivities include Mexican food; think quesadilla and Mole Poblano, Mexican music like mariachi, parades, piñatas and firework. And, of course, plenty of margaritas and cerveza.

Here are five fun ways to join in on the festivities.

In places like Puebla and Mexico City, people re-enact the battle. Men dress as French and Mexican soldiers and generals, and women wear the clothing of the soldaderas, who not only cooked for and looked after the soldiers in wartime but also fought alongside them.

Mexican soldiers carry machetes and old gun-powder rifles while the French soldiers carry bags with wine bottles sticking out. (Because that is what you really need on a battlefield.)

Rumor has it that in some of these staged battles, actual casualties do occur, but more commonly, fruit is used as ammunition, so beware of flying food. 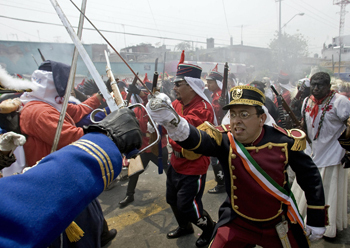 - A group of actors reenact the Battle of Puebla to commemorate their defeat over the French Army, in Mexico City on May 5, 2008. - AFP/Getty Images

Mexicans take great pride in their well-catered shindigs. Go beyond the fast-food tacos and burritos that most folks are familiar with and make yourself a Mole.

Legend has it that two non-cooking nuns from Puebla were surprised by a visitor. They used a molcajete (mortar and pestle) to grind every ingredient they could find -- including tomato, chocolate and chillies -- then simmered the concoction until it thickened to a sauce. Mole Poblano is a staple dish in Mexican cuisine, and traditionally served in Puebla on Cinco de Mayo.

If cooking is not your thing, break out the booze and start a jam session. The Mexican community on the Cayman Islands holds an annual Cinco de Mayo air-guitar competition. Evidently, aside from the date, the only thing related to Mexico and Mexican culture at the air-guitar competition is that Corona is on special. 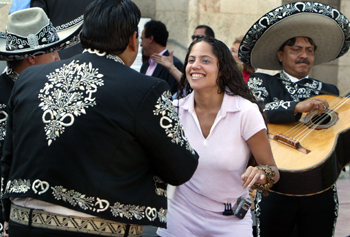 4) Make your way to a festival.

One of the largest Cinco de Mayo festivals is in Portland, Oregon. Founded in the 1980s through a partnership with Portland's sister city of Guadalajara, Mexico, the festival is held over a long weekend. People actually travel from Guadalajara to Portland, bringing authentic Mexican mariachi music and folkloric dancing to the American local, attracting more than 300,000 people each year.

But the celebrations that take place in Denver, Colorado, at Civic Park are by far the most extensive. The festival attracts more than 350 vendors and features three stages of live entertainment and a green chilli cook-off. So do as Mexican's do and find a fiesta in your barrio.

What better way to celebrate freedom then to jump from a plane and plunge back to earth at death-defying speed.