I had never been particularly curious about Cinco de Mayo or what it stood for. Being mexican myself (born in Monterrey, Nuevo Leon), it wasn't a holiday I, or anyone that I knew, celebrated. To me, it figured to be the celebration of a small battle, won in the small town of Puebla, southeast of Mexico City. I deemed it a hyped up holiday, especially by Americans, endorsed by alcohol companies to boost up their sales. That was until I came to Puebla, to celebrate the 150th anniversary of the Cinco de Mayo. I realized how wrong I was. And I'm here to tell you what Cinco de Mayo realy looks like, celebrated in the town most affected by the Battle.

Puebla celebrates Cinco de Mayo in a big way. Under the leadership of the Gobernor of Puebla, Rafael Moreno Valle, from coalition led by the PAN, the city has been modernized. Many even joked that he actually made the Popocatepetl, one of the two most famous volcanoes visble from Puebla, erupt in the city just for the ocassion, since he is rumored to be want to run for President in 2018. This year, the Cinco de Mayo celebration is a month long and it's a celebrity-studded, firework-loaded, military-protected extravaganza. The activities to choose from were many, so I set out to be strategic.

Cinco de Mayo, 2012. 10am- we make our way to the Cinco de Mayo parade. This is the event where everyone goes- families, politicians, the military, vendors, tourists, even horses. It is chaotic, smelly and incredibly fun. Everywhere you look, there are delicious treats to be eaten and fun games to be. People arrive early, to get a good seat wether that be on top of a truck, a roof or a tree, and the parade starts. Beautiful parades of the mexican military, students from the military schools and people representing the french government, people cheer their exhibitors and beam with pride at the quality of the parade and the synchronization of the dances.

We leave in a taxi to find the city crowded, strees closed and people walking everywhere and I realize that celebrating Cinco de Mayo in puebla is comparable to celebrating New Year's Eve in New York City or Mexican Independence Day in San Miguel- it's incredibly fun, but you have to be knowledgable enough to be strategic.

We head to lunch at La Conjura and bump into Joaquin Lopez Doriga, the most famous mexican journalist of all time, and I feel like I'm in the right company. While there, I aim to strategize. Enter my aunt, Eugenia de Silva, who was lived in Puebla for 20 years and knows her way around. She informs me there will be an amazing closing event tonight, but you need passes. She happens to have an extra and I'm in.

The event is, again, incredibly crowded in spite of the nonstop rain and for a second, it looks like the festivities will be cancelled. As I make my way out, dissapointed, I see an exhibition of military armament and ask to get inside to take some pictures. After some namethrowing (thanks, HuffPo ;) I'm able to be let in. And I get a private tour of the military. The exhibition is put in place as "propaganda for the military, a way to show what we do," informs Captain Montañer. And the beam with pride as they instruct me where everything is made. They even let me go into one of the planes, take pictures and head out.

After an hour and a half, I realize the show was not cancelled and is now started. I run towards the sound of the fireworks and get there just in time to hear the President's speech. As I stand there, soaking wet, surrounded by thousands of people who did not go home, in spite of the rain, I am reminded that mexicans are above all, resilient. And, just like everyone else there, I start beaming with pride. I find myself in the company of other pueblans who assure me they always celebrate Cinco de Mayo, but "Nothing as amazing as this year," assures me Lilia Patricaia Garcia Hermoso, another Pueblan woman, who says between smiles that she loves the new Governor Moreno Valle and is so proud to be from puebla.

The closing ceremony is filled with colors, a representation of the battle, folkloric dances and typical mexican costumes. With concerts from Chayanne and Marc Anthony, people's excitement grows. The hostess of the show is Miss Universe 2010, Jimena Navarette, another aspect of pride for Mexicans.

Finally, the show ends with a call to peace, with about 500 dancers dressed as angels carrying candlelight forming various words like "Cinco de Mayo", "Puebla" and the shape of the state of Puebla. "The state of Puebla kind of looks like a dog," turns Lidia, smiling. And I see that everyone in Puebla feels a part of this celebration. Right before I leave, Lidia turns to me once more and thanks me for coming to Puebla, "Bienvenida a Puebla" she beams. "Gracias" I say. She asks me if I'll be coming back and recommends places to go while I'm here.

Coming to Puebla thought me more about Cinco de Mayo, my country and this holiday than I thought it would. Some people say this entire celebration has been hyped up to bring more tourists into Puebla, and it certainly worked with me. Why is that wrong when coming to Puebla is such a delightful experience? This was my first time in Puebla, but it certainly won't be the last.

Check Out Photos Of The Celebration: 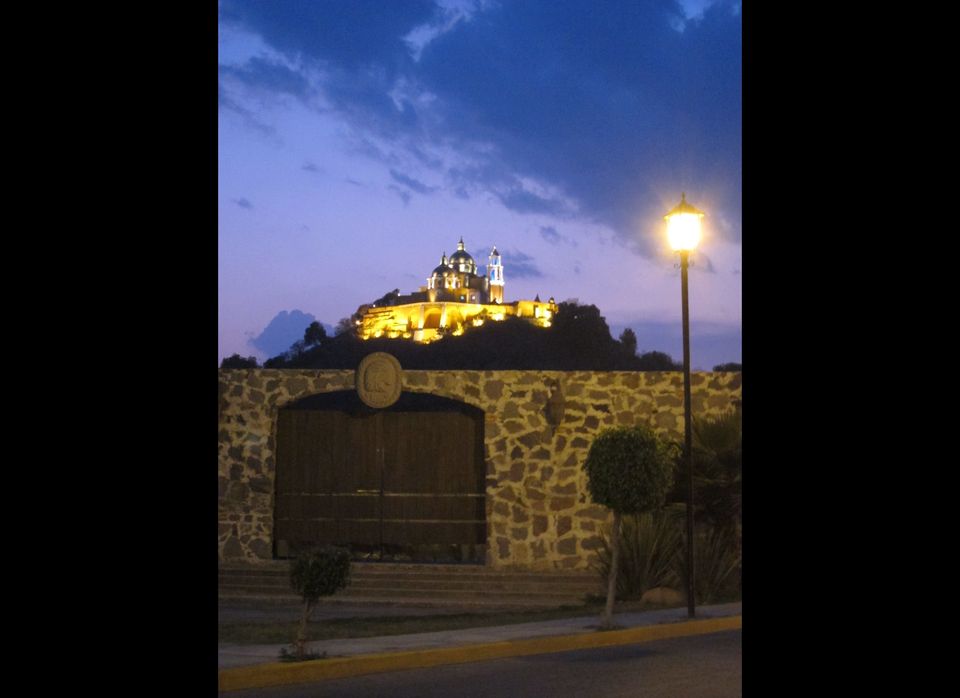