Cindy Crawford has been keeping busy these days and she's apparently bagged another gig -- a Propel Zero campaign. But she took a few moments to reminisce about her early, somewhat traumatic days in the biz, when her first-ever ad for Cross Your Heart bras ended up all over her school hallways:

My very first job was in a Chicago. I'm from a small town 60 miles west of Chicago called DeKalb, Illinois. I started modeling with an agency there and the first job they got me was for bras for Marshall Fields, which is a department store in Chicago. And of course it was one hour booking. It was for the newspaper ad. When you do lingerie, it's kind of a big deal to decide to do that. I think I was 16 or 17 at time. It wasn't a Victoria Secret sexy bra; it was a Cross Your Heart bra. It ended up plastered all over my high school, which was somewhat humiliating. But when you do lingerie you make time and a half. So I was like, "Do you know how much I made? I made $150 to make that picture." So that kind of shut everyone up.

We wonder how they felt when just a few years later, Crawford and her supermodel buddies wouldn't wake up for less than $10,000 a day. 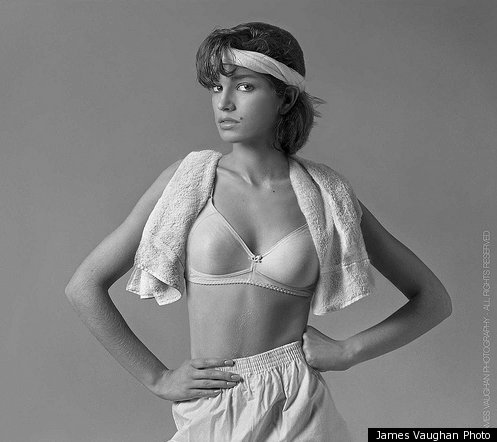