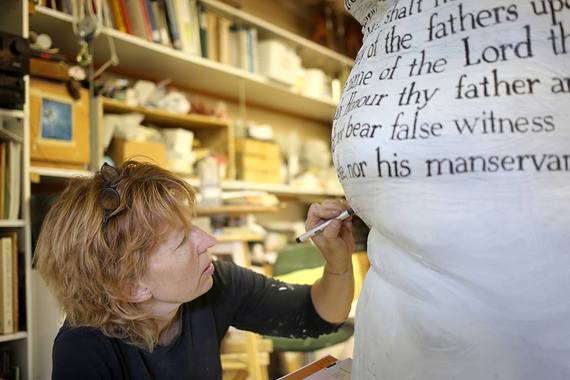 In this world everything is assigned meaning -- natural phenomena, choreographed ablutions, invented signifiers, obscure scripture, works of art. Our hyperbolic media-driven meta-condition of superficiality, simultaneity and speed has diluted the magic of even once-potent words, symbols, and rituals. This is a condition sculptor Cindy Jackson aims to counter with (Not Quite) Salvation, an ambitious collection of two interrelated large-scale sculptural installations -- an interpretation of the Seven Deadly Sins, and a multifaceted "church service" which includes a gauntlet of towering figures in prayer, a pair of hanging figures, and a dramatic altar-style denouement. By turns deftly framing the problem through satire and alleviating the pressure through humor and craftsmanship, Jackson's work speaks to our yearning for salvation partly through irony and partly through love. 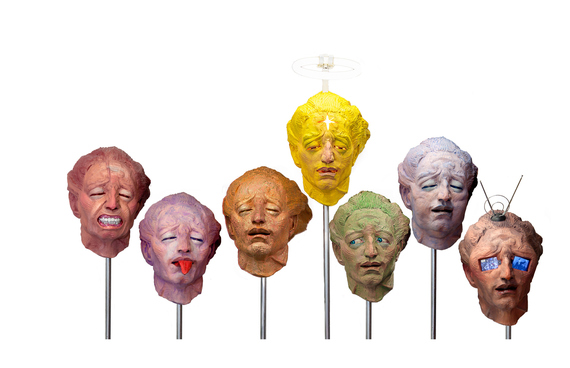 A parade of heads on spikes depict the "Seven Deadly Sins" as interpreted by Jackson's view of what the problem is. Though all based on the same original head/bust form to signify the ubiquity of these flaws, Lust's tongue, Envy's bulging eyes, Wrath's clenched teeth and vein, Covetousness's fashion-consciousness, Sloth's TV on the brain, Gluttony's piggish nose, and Pride's fluorescent halo illustrate our common sins with her characteristically wry wit. 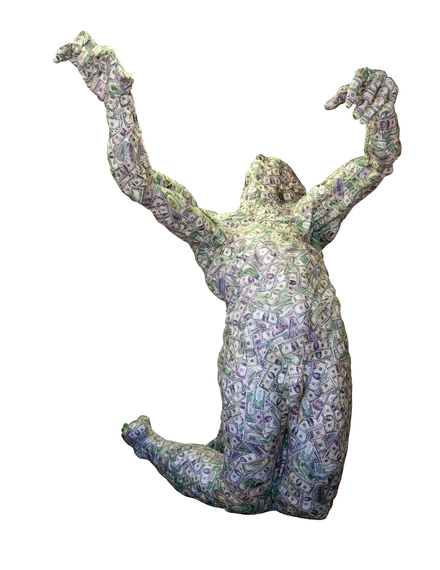 The "Salvation Men" are eight-foot urethane casts filled with concrete, these giants are all made in the same mold and share an impressive classicist musculature, a low center of gravity and a posture of prayer and supplication. Yet though they all strike the same pose, radically different skins cover their naked bodies. The collective narrative of the group explores some of the archetypal and the pop-cultural ways in which people seek salvation and comfort. "TattooMan" has a little fun with the hipster-ubiquity of what were once rituals of protection and power. "SexMan" wears a suitably XL condom, so at least his pursuits in pleasures of the flesh will be clean. "CamoMan" lies prone, off by himself writhing on the ground in an apparent death throe, and speaks to the toxicity of not only individual, but also institutional and national aggression. The fantasy, pop, and magical thinking behind "SuperMan," "MoneyMan," and "BeerMan" are self-explanatory and succeed with a rapier wit. Perhaps the king of them all -- or the spiritual leader? -- is "DogmaMan." Festooned in hand-written quotes from the Koran, Rumi, Leonard Cohen, Patti Smith, Bob Dylan, the libretto of Mozart's Requiem, and the lyrics of Imagine Dragons, this calligraphic scroll of skin expresses how we take these influences and blend them together into something resembling ourselves. 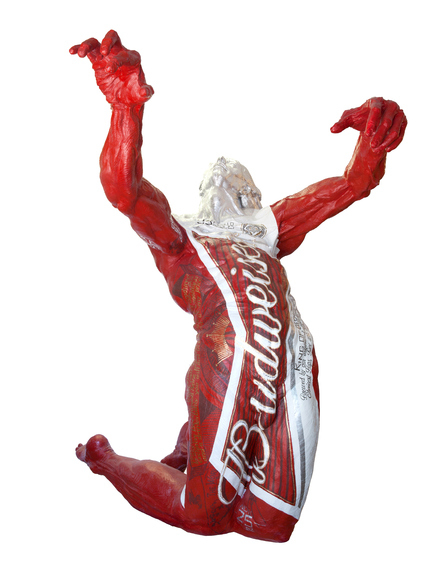 Rumi: the wound is the place where the light enters you. This bit of poetic philosophy is written on the insides of all seven of Jackson's towering "Men" sculptures. But it also applies to a pair of hanging works, "Falling"; 2 swag lights in which the light bleeds through stigmatized hands and chest. Referencing Jesus, the work is tempting to read simply as a gesture against the extremism she sees in organized religion; but its irreverent humor and ethereal beauty also argue in favor of personal spiritual liberty. 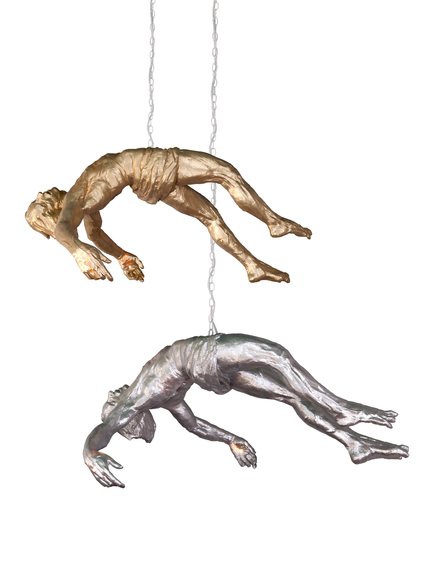 The culmination of these represented struggles is "Always Wanting/Never Enough" -- a pair of large interacting floor sculptures installed in a semi-enclosed sacred, sacrificial space at the back of the "church." The figures, a man and a woman covered in Gucci and Vuitton logos, appear to be wrestling or perhaps writhing in angst-addled physical or psychic pain. Unlike the mindlessness of the worshipful tactics of the Men, these figures experience a more acute sense of torment, loss, and unfulfilled, misplaced desire -- for the superficial, retail-brand things that people so often seek instead of inner peace. 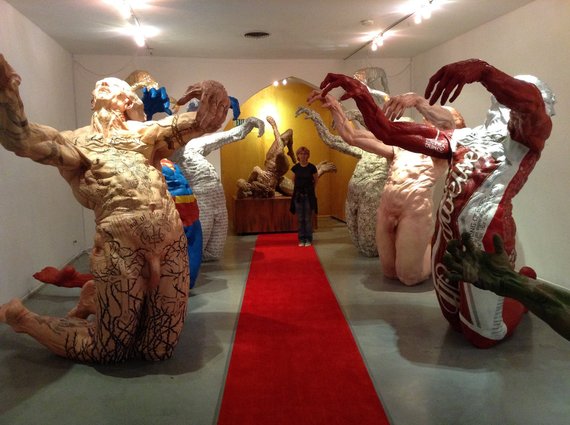