The news Wednesday that Cindy McCain, wife of Arizona senator and Republican presidential candidate John McCain, is endorsing NoH8, the California-based equal marriage organization that was active in its opposition to the California's anti-gay marriage Proposition 8, was welcomed by many in the equal marriage movement.

A message appeared on the NoH8 website praising Mrs. McCain, who joins the ranks of celebrities to be photographed for the NoH8 campaign by Adam Bouska, the photographer whose iconic portraits of celebrities with the signature strip of silver duct tape across their mouths, signaling solidarity with the equal marriage, have become symbols of the post-Prop 8 struggle:

The McCains are one of the most well-known Republican families in recent history, and for Mrs. McCain to have reached out to us to offer her support truly means a lot. Although we had worked with Meghan McCain before and were aware of her own position, we'd never really thought the cause might be something her mother would get behind. We have a huge amount of respect for both of these women for being brave enough to make it known they support equal marriage rights for all Americans.

Aligning yourself with the platform of gay marriage as a Republican still tends to be very stigmatic, but Cindy McCain wanted to participate in the campaign to show people that party doesn't matter---marriage equality isn't a Republican issue any more than it is a Democratic issue. It's about human rights, and everybody being treated equally in the eyes of the law that runs and protects this country.

Senator McCain's office was swift to distance himself from his wife and daughter's position on equal marriage (his daughter Meghan has been an articulate and outspoken advocate for LGBT rights, including equal marriage.) McCain's office issued a terse statement reaffirming his opposition to gay marriage, a platform upon which he campaigned during the 2008 presidential election:

I respect the views of my family, but remain opposed to gay marriage and believe the sanctity of marriage is only defined as between one man and one woman.

On Thursday evening, McCain reiterated his position to Wolf Blitzer on CNN.

While there is much to praise in Mrs. McCain's admittedly late arrival to the equal marriage struggle, the 700-pound silver elephant in the room is the fact that it is just that---her very late arrival.

Cindy has, in the past, expressed her thrill at hanging out with gay Republicans. Unfortunately she didn't speak up about her husband's support of Proposition 8 when it could have made more of a difference.

For many involved with the equal marriage battle, it will be difficult to square this glamorous, newly-liberated vision in the NoH8 ad campaign with the elegant, enameled 2009-edition Cindy McCain, cheering and clapping at Sarah Palin's rallies and speeches.

If Mrs. McCain's feelings about equal marriage were then as she says they are now, it must have been galling for her to watch Mrs. Palin and Senator McCain run a campaign that pandered to the bigotry and paranoia of the Republican base. More galling still for her to have had to stand there, clapping and smiling as though the McCain/Palin ticket was the one thing standing between America and moral annihilation, while gay and lesbian families lost their very right to exist, and to be recognized as existing.

In the wake of the recent equal marriage defeats in New York and New Jersey, not to mention the ongoing assault on the very notion of equal rights for LGBT people nationwide, an observer could be forgiven for wondering who exactly is the target of Mrs. McCain's NoH8 campaign? With her husband vehemently opposed to equal marriage, and his party unified around this one point as no other, whose mind is she planning to change?

How is Mrs. McCain and her glamorous NoH8 portrait anything more than a harbinger of the day when silver duct-tape replaces the ubiquitous red AIDS ribbon worn by celebrities at awards ceremonies?

Of course it would have been more useful for Mrs. McCain to take this public position during the election. That goes without saying. The fact that she wasn't able to bespeaks not only the power of the homophobia around her, but also business of politics itself.

If the Democratic Party has been this disinclined to address something as plainly obscene as Don't Ask, Don't Tell when they had a filibuster-proof Senate, it seems more than a little churlish to rag on Cindy McCain for coming late to the equal marriage party.

Too, as a senator up for re-election in his home state this year, it's also too simplistic to say John McCain "let" his wife pose for the no NoH8 campaign. He's seasoned enough to know that the ad will draw fire from some of his conservative constituents, many of who are snapping and drooling for the taste of raw meat in the wake of the Massachusetts loss. The coming days will doubtless reveal some diarrheic gurgling of discontent from evangelical teabaggers about Mrs. McCain's treason. That alone seems worth the price of the duct tape.

Should Mrs. McCain, as a Republican wife and mother of a certain age and background, succeed in getting other Republican wives talking about the issue of LGBT equality, then she will have already carried more weight with her ad than any number of the interchangeable Hollywood waifs preaching to the already-converted. If she can get these women to get through to their pudding-headed husbands, there really is a God.

If Mrs. McCain has always held pro-gay rights positions in private, constrained by her husband's political career, it might be useful to think of this in terms of a "coming out" process. Each person in their coming out process has their own time. It may not be the time we'd wish for them, but it's theirs. In that, fair-minded people can only wish her well. I certainly do.

I don't know Cindy McCain's character, but I do know that actions are an excellent indication of character, and that good people come around. They always come around. They eventually see beyond a once-held myopic position. Ideally she'll even bring her husband around to a more fair and morally equitable position.

Or, failing that, at least keep some extra silver duct tape in her purse. Just in case. 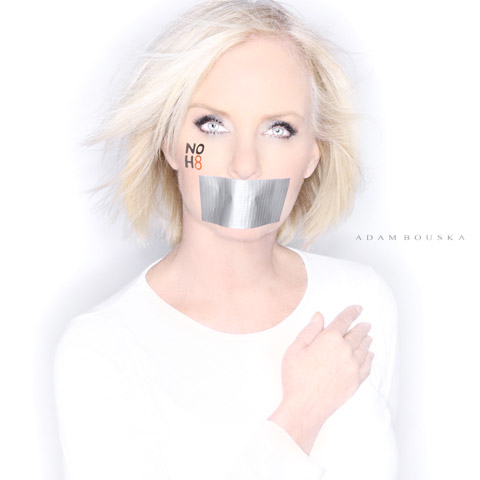