An Alabama high school teacher's Facebook rant against some student pranksters has her in hot water.

Cindy Stephens is a teacher and band director at Sylvania High School in Sylvania. Police said four recently graduated students used a spreader to coat the roads around the school with a mixture made from chicken excrement on Tuesday.

Stephens took to Facebook to vent her frustration at having to clean part of the mess up, and wrote that she hoped the boys will be sexually assaulted in jail for their prank. Community members were "appalled" and "disgusted" by the teacher's remarks, according to WAFF. 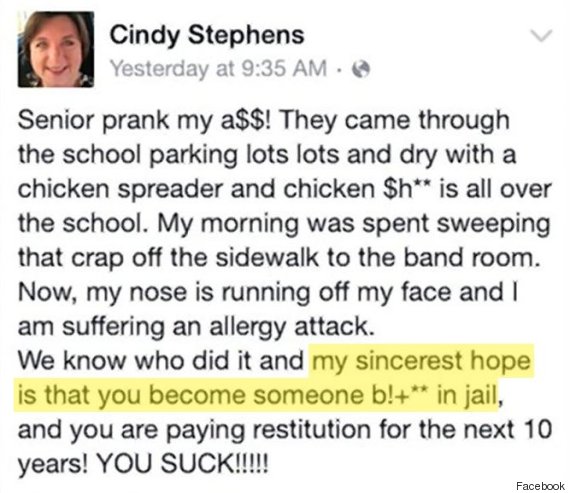 Senior prank my a$$![...] My morning was spent sweeping that crap off the sidewalk to the band room. Now my nose is running off my face and I am suffering an allergy attack. We know who did it and my sincerest hope is that you become someone [sic] b!+** in jail, and you are paying restitution for the next 10 years! YOU SUCK!!!!!

Administrators caught wind of the public post after community members complained. They've suspended Stephens with pay while they investigate. They say what Stephens wrote wasn't appropriate, and that teachers need to be more careful about what they write on social media.

"The best thing to do is to go to a quiet place, maybe talk with your family," DeKalb County school board member Matt Sharp said, according to NBC affiliate WAFF. "Don't put it on Facebook."

The students behind the prank were caught and ordered to perform 120 hours of community service. Sylvania Police Chief Ross Greenwood told the Associated Press that the students are extremely remorseful, and have agreed to pay for the cleanup, which cost Sylvania and DeKalb County thousands of dollars.

"We don't want to mark the kids' record for the rest of their lives for a stupid mistake, but they're going to have to be punished for what they did, too," Greenwood told WAFF.

If any of the students fail to complete their punishments, all four will face charges, police said.