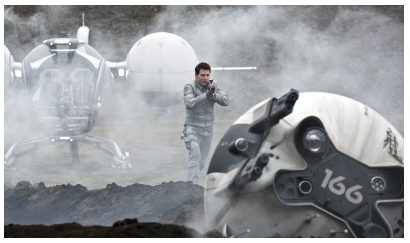 Oblivion is a fun, state-of-the-art, big-studio science fiction adventurer, action-packed and, under the direction of Joseph Kosinski, quite beautiful. That, in its telling the tale of post-apocalyptic caretaker Tom Cruise discovering his alien-war-ravaged Earth suffered its wounds for reasons other than he was told (with Morgan Freeman doing for the Morpheus role what he previously did for penguins), the film isn't much more than an assemblage of well-established science fiction tropes shouldn't be an impediment to enjoyment -- at a time when studio films seem to have a problem getting a basic story across, coming across a corking-good adventure is not something to sneeze at. Come join Cinefantastique Online's Steve Biodrowski, Lawrence French, and I as we debate the pluses and minuses of the film, and once again pledge our troth to Stanley Kubrick.

Also: Steve and I discuss Rob Zombie's moody, new horror film, The Lords of Salem. Plus: Nothing coming to theaters next week.