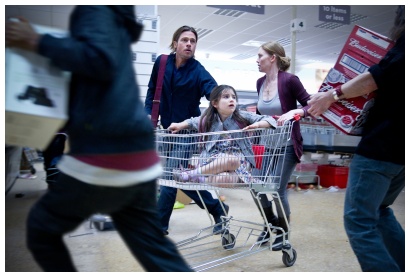 In perhaps a revelation more dramatic than anything in the film itself, World War Z has triggered a shockingly wide spectrum of reactions from us here on the Spotlight. Is the Brad Pitt-starring zombie thriller a top-notch popcorn movie with well-staged action, gripping suspense, and an amazing global scope? Is it an unfortunate misfire, with good ambitions and notable high-points, undone by a tortured production history? Is it an unqualified flop, simplistic to the point of silliness in its scripting, and inept in its attempt to portray a zombie apocalypse on a worldwide scale? Come join our special guest, beabetterbooktalker.com's Andrea Lipinski, as she weighs in on this surprisingly controversial entry in the 2013 summer sweepstakes, with Spotlight regulars Steve Biodrowski, Lawrence French, and Dan Persons.

Then, Andrea, Steve, and Larry give their opinions of the latest Pixar film, Monsters University. Plus: What's coming to theaters next week.