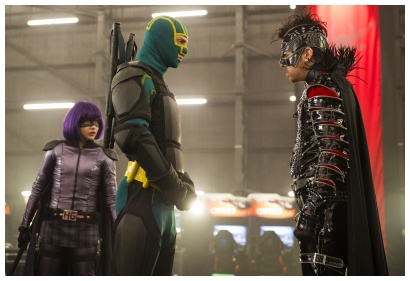 It's official: We have definitively hit our late-summer low-point with the release of Kick-Ass 2. The sequel nobody asked for to a film that wasn't anyone's notion of cinematic excellence to begin with, KA2 takes us back to a New York where a lowly high-schooler (Aaron Taylor-Johnson) strives for something better in life by becoming a self-appointed super hero. This go-around he's aided by an entire crime-fighting underground headed by Jim Carrey (acquitting himself nicely despite his subsequent disavowals), and is saddled with an arch-nemesis in the form of the former Red Mist (Christopher Mintz-Plasse), now calling himself... wait for it... the Motherfucker. Hit Girl (Chloe Grace Moretz), meanwhile, hangs up her cape and finds herself in the midst of a Heathers subplot, none too convincingly. It's two hours in which inept comedy butts up against explicit violence, and no one, not heroes, villains, nor the audience, emerges unscathed.

Cinefantastique Online's Steve Biodrowski, Lawrence French, and I get together to tend to our wounds, and engage in a cathartic discussion of the myriad ways this uninspired follow-up fails in even its most modest ambitions. Let the healing begin. And the Kick-Ass franchise stop... please. PLUS: What's coming to theaters next week.