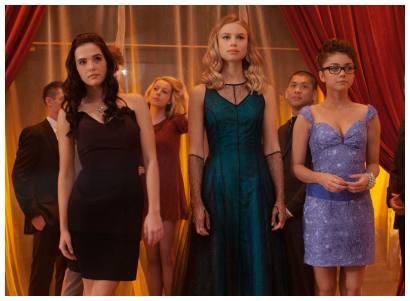 "They suck at school," the posters for Vampire Academy proudly proclaim, and let it now be said that they aren't any better at movies, either. A lackluster production whose only reason for existing is to try to snag the Twilight Saga demo with as minimal effort as possible (to paraphrase W.C. Fields: "We want to capture your box office bucks in the worst way," "Ah, yes, the worst way"), this tale of a school where human/vampire hybrid Dhampirs protect beautiful aristocratic vampire Miroi against violent, bloodthirsty vampire Strigoi in the midst of typical high-school politics, inter-family power struggles, and something something something, Vampire Academy's major takeaway is that you can't just indiscriminately rip off elements of Twilight Saga, Harry Potter, The Hunger Games, and, so help us, Avatar: The Last Airbender, and hope the resulting product will satisfy anyone's standard for entertainment.

Beabetterbooktalker.com's Andrea Lipinski joins Cinefantastique Online's Steve Biodrowsky and me to bear witness to the film that somehow manages to instill new appreciation for the lackluster releases of January. Then, Steve gives his take on satirical, toy-based comedy The Lego Movie, and Dan discusses the conjectural, post-apocalyptic brain-game movie, After the Dark. Plus, what's coming to theaters next week.