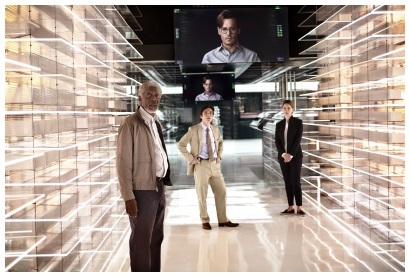 It's some kind of irony that the experience of watching a film called Transcendence is far from transcendent. Not that director Wally Pfister doesn't try: The story of a scientist working in A.I. research (Johnny Depp) who has his own consciousness transferred to the Web is lushly mounted (as befits a big-studio production from the man who previously served as Christopher Nolan's director of photography), reliant on an atypically grounded mise en scene that emphasizes the love story between Depp's scientist and his colleague wife (Rebecca Hall), and chock full of actors who can deliver skilled performances (joining Depp and Hall are Morgan Freeman, Cillian Murphy, Kate Mara and Paul Bettany). Unfortunately, it's that restraint, along with poor plotting (Really? We're supposed to empathize with anti-technology terrorists whom we've previously seen murdering a roomful of innocent people with poisoned cake? Really?), that leaves the film as a promise unfulfilled.

The Cinefantastique Online team of Steve Biodrowski, Lawrence French, and Dan Persons get together to weigh what went right and what wrong with this ambitious attempt at dramatic science fiction. Click on the player to hear the show, or right-click the title to download.