Circ X is a South Florida based troupe that is unbelievably amazing.

Circ X is all that and then some.

I fell head over heels in love with this 20 person troupe.

From the pre-show interactions and vibes of members mingling with the crowd, to the last song and dance extravaganza over REM's "It's The End of the World" -- it was non-stop engagement.

Octavio Campos, who is no doubt one of Miami's most talented performers, was the Master of Ceremonies. He lead us through a 75-minute show featuring about twelve unique acts ranging from classic cabaret, modern burlesque, drag queen opera, crowd sourcing interactive comedy, European clowning, modern juggling and huge song and dance numbers featuring the whole troupe.

The show also featured Juleisy and Karla, two Chonga drag queen performance artists who represent the group Hialeah's Finest -- they crash the party with classic Miami lines like "are you the manager" and "I'm on the list" and "I told you I'd get us in" -- they're always great and belonged in this troupe.

The show also featured an angry condom whose role was to hype the crowd.

She was so funny and cute.

She was like a cross between a minion and Thing # 69.

All the dancers were incredibly sexy and talented in their movement and contortions.

There was an amazing dance scene over Marlyn Manson's "The Dope Show" with a mix of raunchy heroin chic reminiscent of the bathroom scene in Trainspotting.

There was a wonderful ballad about Lolita the sea whale being set free from the Miami Aquarium with hysterical lyrics like: "whatever Lolita wants, Lolita gets."

Honestly, every act and scene was amazing.

Cabernet and burlesque has always been political and this show was well plotted with specific messages aimed at timely social science issues. I'm a big fan of Octavio Campos but as I watched the show and understood and deconstructed the mechanics, politics, and choreography -- it all pointed to all that which is ultimately Circ X: Diana Lozano, its founder, director and producer.

Ms. Lozano is a mastermind.

You could fall in love with her brain and I told her so in an e-mail.

She explained to me the concept of the show at the Fillmore.

"I wanted to create a cabaret that was much more than the typical frivolous T + A that you see at South Beach night clubs. I want a space where Miami's best fringe artists can really take risks and explore. At the same time I did not just want to preach to the choir....I wanted to expose live theater to an audience that may not usually go to it... blurring the lines between low and high brow entertainment."

My only criticism of CircX is that there were too many empty seats.

If you didn't believe in our Magic City; if you didn't think Miami's arguably the best city in America, you might think this troupe is too good for Miami. But, on the contrary, they are Miami: classy, racy, raunchy, sexy, controversial and on fire.

Probably not on the beach because South Beach is too touristy. They are not properly appreciated on the beach. This troupe could thrive with a residency in Wynwood, perhaps at the Miami Light Project, maybe in the side area of Mana, like two shows during every Art Walk -- they would kill it. Real talk.

Someone needs to give this troupe a permanent home because right now they're not gigging anywhere near enough and that's a shame for all of us in Miami. 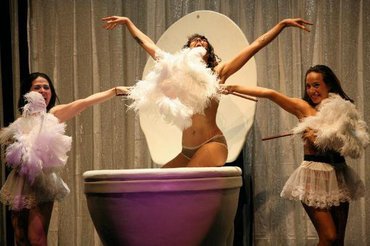