Often, when I get overwhelmed by circumstances in my life, I imagine circling around the Kaaba, the cube-shaped emblem of Islam that stands in the centre court of the Great Mosque, Masjid Al Haram, in Mecca. Performing the short pilgrimage, known as umrah, involves as a first step walking seven times around the Kaaba, literally meaning "cube" to describe the approximate shape of the structure whose corners are positioned toward the four points of a compass.

I first visited the Kaaba during Ramadan three years ago. For my entire life, the stone edifice draped in an elaborate black silk- and gold-embroidered cloth, or Kiswah, had seemed accessible only through images in books or the woven depictions of it on velvet prayer rugs. Muslims pray in the direction of the Kaaba regardless of where they are in the world. Always conscious of its importance, I couldn't envisage seeing it before me and praying at its side. 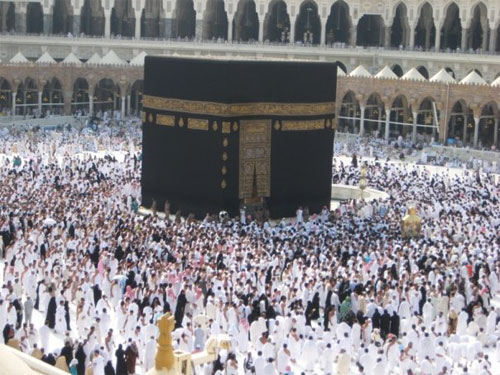 The Kaaba during my first visit to Mecca in 2008

Standing in the hall of the Great Mosque, the Kaaba in immediate view for the first time, moved me to tears instantly. I arrived just after sunrise with my cousin and her son in earnest hopes we could get near enough to the Kaaba for me to lay my hands on this sanctuary that God had first instructed Prophet Abraham and his son Ishmael, peace and blessings upon them, to erect in His honour. Muslims are drawn by the millions to Mecca in Ramadan to perform umrah, which carries the same excellence as the hajj pilgrammage if performed in the course of the month of fasting, according to Prophetic teachings.

The early-morning crowd was enormous and I worried it would be impossible to get near to the Kaaba. Yet we joined the mass trekking around it with relative ease, uttering phrases of appreciation to God, sending good wishes to Prophet Muhammad, peace and blessings upon him, and asking God to answer some of our most-pressing prayers. During my first loop around the Kaaba I found myself standing close enough to touch it, and I placed my head on the surface in an awe-inspiring few moments, thankful God had ordained for me to be there.

But walking around the Kaaba wasn't always easy. Every so often our focus would be disrupted as we got caught in an indiscriminate crowd of people of all ages, nationalities and income levels. I was reminded then more than any point in my life that every human, regardless of social condition or gender, is equal before God. Each of us on the same journey, we are simply given different trials to test of our faith.

This congestion would generally form shortly before turning the eastern corner of the Kaaba where the sacred Black Stone is positioned. Participants tend to slow down to swarm around the celestial stone in hopes of touching or kissing it. The Prophet, peace be upon him, said the stone "descended from Paradise whiter than milk but the sins of the sons of Adam (human beings) made it black." Even if you aren't waiting in the haphazard line-ups to touch the stone, it becomes difficult to move or catch a breath attempting to pass that corner. 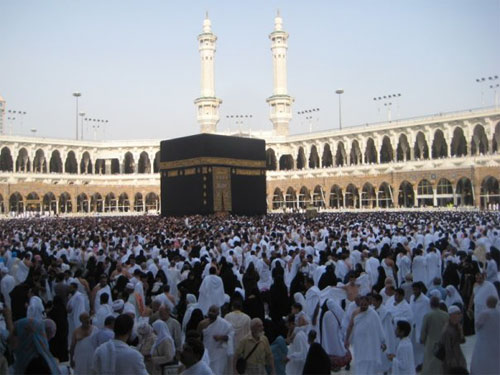 It can be a tense experience both physically and mentally, giving us no choice other than to patiently focus entirely on our prayers and let the tightened crowd push us forward at its own pace. The obstruction would last for several minutes until all at once, as we passed the corner, the crowd would disperse and we would walk without difficulty again, eyes focused on the Kaaba's immaculate walls and the Quranic inscriptions embroidered in gold on the curtain enveloping it.

Over the course of going the rounds of the Kaaba, the same scenario -- moving with ease and then getting caught in an inevitable jam -- repeated itself several times with apparent exactitude. It struck me before I had finished the seven rounds that walking around the Kaaba was a lot like my journey through life up to that point.

There had always been periods when things were easy followed by times when tensions mounted and I was inundated by pressures exerted by work, family, relationships, illness and grief. These hardships always ended up being temporary stops along the journey and, once I had moved past them their significance proved to be less considerable than I initially perceived. Yet in the heat of the challenge, I became consumed by it because I lost the perspective that relief was around the corner.

Walking around the Kaaba, I was at a vantage point to know that the jams I would get caught in were temporary -- they would end, literally, around the corner. This helped me be patient even when the pressure was greatest. Carrying this understanding through life is more difficult, but my experience at the Kaaba has changed my perception of the sticky situations I get caught in.

It reminds me that whatever may be weighing me down will push me toward some form of resolution or relief. I remember that struggles are part of the journey, and enduring them will make the relief that comes from turning a rough corner more satisfying. I become thankful for times of comfort and, aware that a new struggle is likely to present itself soon, I am more patient when it arises, certain that my journey through life would not be complete without these fluctuations.

Most of us will visit the Kaaba only rarely, if at all, during our lives. Yet if we become conscious of God at each turn -- which is how I define living as a Muslim -- we realise that intervals of struggle and resistance are intrinsically connected to periods of pleasure and ease. Each phase contributes to the understanding and appreciation of the other, and our condition throughout is guided by how well we are able to see God in every step.