Cirque de la Symphonie returned to Verizon Hall in front of and often flying over the musicians of thePhiladelphia Orchestra with their troupe of aerialists, acrobats, jugglers, clowns and contortionists. Christian Marcelaru, Phil. Orch. dynamic associate conductor, dug into a wildly diverse play list of familiar repertory and excerpted works by composers as diverse as Poulenc, Delibes, Falla, Dvorak and Gimenez. 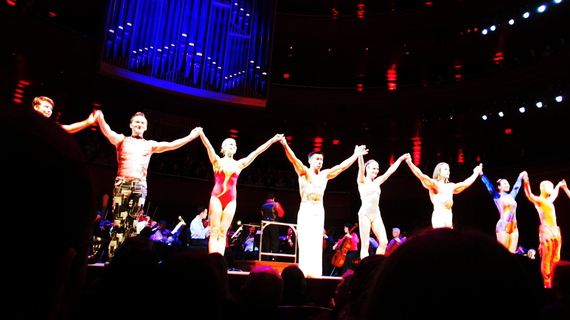 The selections featuring swooping, vertiginous, vaulting, dervisher and muscled orchestrals that engage the daredevil feats of the Cirque's unique performers, exemplars of new circus arts. The troupe is performing with many symphony orchestras and for classical purists it might seem gimmicky, but this show is musically compelling, on top of being a lot of fun.

Marcelaru opened with the careening and rowdy fanfares of Ibert's Bachanale, in its first Philadelphia Orchestra performance. Then flying with John Williams' Superman movie theme, acrobat aerialist Shem Biggie, tangles and untangles himself on a 40 ft suspension rope. Next, uber-buff gymnast Vitalii Buza spins and juggles an humongous metallic cube in a series of floor maneuvers. Buza is just warming up, his later aerial feats on two straps, executing moves that you would see Olympic rings, but with much more control and lyricism in his body. Meanwhile, the iron crosses, forward rolls and static layouts on straps approx. 25 ft. up just flow with a degree of difficulty is off the charts.

Andrey Moraru, in a tight satin tails and a gothy plume mounts two posts for precarious contortions but makes it more than a balancing act, it was a routine with extreme yogic positions, one-harm stands with askew body positions, full leg extensions and cabaret witty choreography.

Marcelaru articulated a most rousing rendition of Leonard Bernstein's Overture to Candide, which is already cirque de la Lenny. Meanwhile, dancer-juggler Vladimir Tsarkov slinks on like a invertebrate cartoon (in a head to toe orange unitard and loin cloth) and conjures kinetic sculptures juggling and bouncing balls. His top of a head masque from traditional Asian theater, morphs him into otherworldly creature.

Aleena Sergeeva turns a dozen hoops into a dazzling slinky moving over her body. Meanwhile, she works them in arabesque poses, keeps them in motion as she glides into a handstand with the hoop twirling on her toes. Riding over, under, sideways or down, Oleksiy Snarskyy demonstrates the extreme sport fun of the German wheel.

A medley of Rimsky-Korsakov's Gypsy Song from Capriccio espagnol with harpist Elizabeth Hainen gorgeous harp cascades ushering in aerialists Christine Van Loo and Shana Lord during the Fandango section. The duo flies over the stage via a suspended hoop, their precarious dangles and torso interlocks hypnotize. Later, Van Loo and Russian gymnast Alexander Fedortchev do their famed red sash duet to Tchaikovsky's Waltz from Swan Lake. They sail out over the audience and there are even a few moments when it might spell curtains for them were it not for the music to escort a soft landing.