On an island deep in the ocean mists, the moon rises over a mythic world where women rule the winds and tides. Cirque du Soleil's Amaluna, now playing at Washington D.C's National Harbor, captures the strength of the female spirit and the power of women's voice in its new show from Tony Award-winner Diane Paulus.

A re-imagining of Shakespeare's The Tempest, Amaluna is a coming-of-age tale about the passage of feminine wisdom between a queen and her daughter. Along the way, young Miranda is guided by the ancient knowledge of a host of goddesses, a tribe of Amazons and her mother Prospera, the benevolent ruler of the island.

With a cast that is 70% women and anchored by an all-female band, Amaluna showcases some serious girl power. Its storyline taps into something even deeper.

In the collective imagination, we retain an undeniable fascination with the archetype of the warrior princess, the empress, the oracle, the dragon mother.

For what do we long?

Perhaps the goddess narrative speaks to us of some long forgotten magic and power that we can call upon in our times of need. Cirque du Soleil unveils this lost world where women reign in a performance that is at once magical and moving.

Musician and vocalist Julie McInnes, who stars as Prospera, is a force of nature on stage. "This show is a phenomenal celebration of what it means to be a woman," says McInnes. "Amaluna celebrates female strength, from grace to technical ability. The cast feels that energy. The women are beautiful, strong, athletic and sexy."

The Act of Transformation

Much like Disney Pixar's Brave, Amaluna puts the mother-daughter relationship at the center of the story. "It represents that time when a mother is doing her best to make sure her daughter has the best start in life," says McInnes. "I think about my own mother dropping me off at boarding school, the process of letting go. When Prospera brings on a storm, for her daughter it opens up the possibility of love."

As Miranda makes the transformation from a girl into a woman, she learns to embrace and control her feminine power for love, strength and defiance, from a cast of characters that exude beauty and defy gravity. In a brilliant piece of casting, Miranda is portrayed by a contortionist who balances on the edge of an illuminated water bowl before taking the plunge and coming into her own.

The act of finding one's self hit home with Andréanne Nadeau, the talented aerialist who plays the Moon Goddess. "I had been a dancer my whole life, but I didn't know I would end up here," Nadeau says, as she balances herself in a training hoop backstage. "Still, there was something inside me that pushed me forward, little by little. I just followed my passions and they led me here."

Cirque du Soleil is famous for its fanciful reimagining of what humanity could be. Imagination is a precursor for social change, for it brings the impossible to life. The circus arts have been used for education around the world, including through Cirque du Monde, the company's social good initiative to empower at-risk youth.

Creative expression, whether through dance and movement or poetry and song, has long been recognized as a transcendent experience that helps us engage the world in a new way. Stories told through artistic outlets are the mirrors in which we discover and find ourselves. "I don't hide from my emotions when I perform," says Nadeau. "Instead, I let them fuel my expression. If I am upset, frustrated, confused, happy, whatever it is I am feeling, I release it through my movement."

The arts can help us tap into our own internal sources of strength and playfulness, darkness and whimsy. When we dream, when we perform, we act out our innermost desires, recreating ourselves and bringing our stories out into the light.

In the circus of the imagination, anything is possible.

Amaluna is playing in Washington D.C. through September 21, 2014. It will host a special benefit on September 19 to support social circus programs for youth. 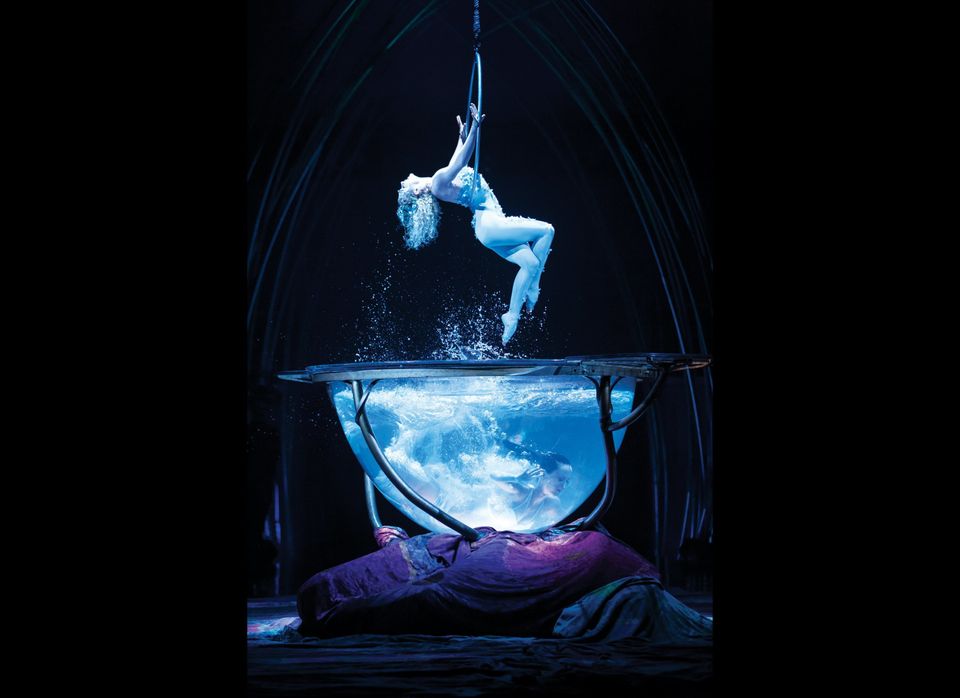