It is no secret that mobile phones are conquering the world. With more than 6.8 billion mobile subscriptions worldwide, the current and future impact of mobile phones is staggering.

And although mobiles are linking voices from the farthest corners of our planet, only a fraction of those devices have Internet connections. Research shows that mobile broadband has the strongest potential to increase economic growth and create more inclusive societies. So how can we help more people connect to the mobile Internet? The answer partially lies in providing the right conditions for mobile phone users to become mobile broadband subscribers.

Take, for example, a security guard named David, whom I met last month in Nairobi. Belonging to the Maasai ethnic group, David is from the drylands region south of Nairobi, about a four-hour bus drive from the city. David has been employed as a security guard since 1995, working four weeks at a time in Nairobi, before returning home for two weeks leave to tend to his family and homestead. In order to communicate with his wife and children while away, David acquired his first mobile phone in 2001. Yet David uses it for more than just chatting and sending messages. It also acts as his bank, allowing him to send home his paycheck and pay bills via the mobile financial services that were pioneered in Kenya. David does not, however, connect to the Internet... yet. 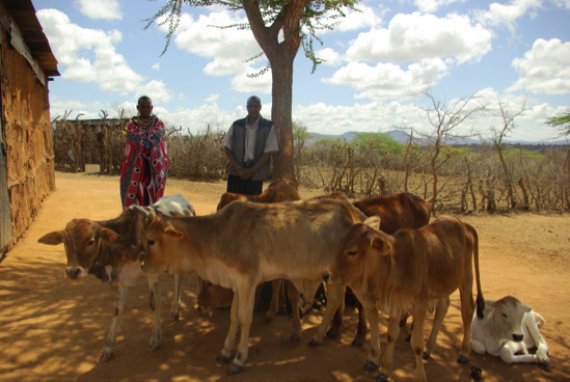 David and his wife, Namunyak, at their homestead in Kumpa, Kajiado


The issue is partially familiarity, and partially cost. Voice and text messaging in many countries are substantially cheaper than Internet access. New research by the ITU estimates that mobile broadband services in Kenya costs 12.4 percent of Gross National Income (GNI) per capita, 10 times the relative cost of access in countries such as the U.S. or the U.K. where average mobile broadband access costs 1.3 percent and 0.4 percent of GNI per capita, respectively. But increasing Internet affordability in countries around the world is possible, particularly by addressing critical policy and regulatory challenges. So today, Cisco, along with a diverse set of over 30 organizations, is announcing the launch of the Alliance for Affordable Internet (A4AI). This growing coalition includes companies, governments, and civil society organizations from developed and developing countries, all focused on creating the conditions for open, competitive, and innovative broadband markets.

Together as the A4AI, we believe that policy and regulatory change is the key to driving down broadband access costs. Even though amazing technical solutions to affordability challenges are emerging, the best technologies can't drive change in the face of burdensome regulations or regressive policies that prevent them from being implemented. However, experience shows that changes to policy can deliver impressive results, fast.

The A4AI is focused on helping to achieve the UN Broadband Commission target of entry-level broadband access priced at less than 5 percent of monthly income. Currently households in the developing world currently pay on average 31 percent of monthly income for a fixed-connection, and the price of an entry-level mobile-broadband plan represents between 11 and 25 percent in developing countries; so there remains a long way to go. To achieve this goal, A4AI will create an action-focused blend of advocacy, knowledge-sharing and robust original research and work hand-in-hand with national governments and regional organizations on direct engagement. A4AI has already published a list of policy and regulatory best practices and will release the first edition of an annual affordability report in December.

Ultimately, this is about connecting the unconnected, creating unprecedented opportunities for individuals, businesses and countries around the globe. Through network technology, we can now join others anywhere in the world to act collectively, pooling resources and talents to solve problems far too big for any one of us to solve alone.

Making the world more connected for the benefit of all requires us to focus on the places where connectivity is lowest, such as the world's 49 least-developed countries where over 90 percent of people are still offline. Increasing affordability of Internet access will help people around the world, like David, do even more with the power of communications technology.

For more information on the Alliance for Affordable Internet and to see how you can join us in tackling the policy and regulatory impediments to lowering the cost of Internet access, visit http://a4ai.org/.

How is your organization using the Internet of Everything to improve the world? Share your story and join the #IoE conversation with @CiscoCSR on Twitter.