For anybody intent on relocating to a fortified, self-sustaining community based on the principles of patriotism and survivalism -- and on doing so without supporting Glenn Beck -- "the Citadel" is here to meet their needs.

A concept developed in right-wing online circles and coordinated in conjunction with the III Arms gun company, the Citadel community is hoping to serve as a "bastion of liberty" in rural Idaho. The area still has deep ties to white supremacist groups, despite a high-profile ruling against the Aryan Nations in 2000. The Citadel aims to house between 3,500 and 7,000 "patriotic American families" convinced that they need to stock up on weapons and remove themselves from broader society in order to prepare for catastrophe.

The organizers lay out their doomsday scenario:

The Citadel is primarily designed to defend against a grid-down, economic collapse scenario. When most people ask this question they are thinking in terms of defending against violent action but there are other aspects to defending ourselves. Self-sufficiency in terms of food, water and energy are also a form of defense against a collapse scenario, so these are a major part of our plan.

The Citadel is not designed to withstand any direct .Mil or .Gov attack. Nor is the Citadel, in any manner, attempting to provoke any government entity.

Guided by Thomas Jefferson's concept of "rightful liberty," or the idea that "neighbors keep their noses out of other neighbors' business, that neighbors live and let live," the group hopes to purchase between 2,000 and 3,000 acres of land for their community. Much of it which will be developed behind reinforced walls. 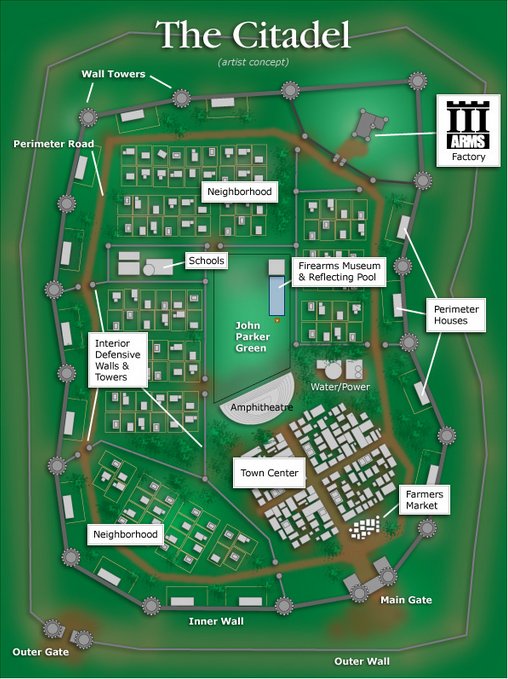 Prospective members must pay a $208 application fee and sign the Patriot Agreement, which mandates that every resident of age own an AR-15 rifle, 1,000 rounds and a stockade of other supplies for survival. The agreement also requires "Patriots" ages 13 and up to pass firearms proficiency tests, and declares that every resident of age agree to be equipped with a sidearm whenever visiting the town center.

More than 200 have already signed up for the community, the Daily Mail reports. So far, the primary hope for employment would be to find work at the III Arms weapons factory that would be housed on the premises, though the Citadel also says it hopes to promote its own tourism industry.

The organizers promise they aren't "wackos, cultists or racists," and vow to live by federal and state laws. They do, however, have lofty goals to establish a currency, as they supposedly plan on forming their "own bank that will issue Citadel coins in silver and gold."

If none of that serves as a draw to potential applicants, to top it all off there will apparently be a real "castle" in the Citadel.

Things Being Blamed For Sandy Hook